It was that time of year again, time for remembrance. My lucky match some say, the Poppy Match, I've certainly had more than my share of luck and good results over the 30 years I've fished it. Hopefully I could break the poor draws of late and get a decent result.

On Saturday I went to Gloucester to see my youngest daughter, it was raining hard most of the day and I aqua planed on the M5 despite only driving at 60mph, thankfully the ESP on the car kept the wife and myself safe but it was a scary moment. All of this rain was going to turn another dropping river into a bad river, so there was no prep required for me really. I bought some nice cheese, a decent bottle of gin and some red wine on the way home and that would set me up for Sunday lol.

Sunday morning I was up nice an early, no hangover as I only had a couple of those drinks I bought honest. The draw was at Frys and the match was pegged 10 pegs at Chequers, 20 pegs at Crane and 70 pegs at Newbridge. The peggers had done a good job by doing their best to peg it with the river rising, but they could only do so much. It always good to look out for some old faces on this match, but today a few were missing, I hope it was only the conditions that put them off and they are OK. One angler in particular I only see on this match is Mike Shellard, he was not here, Mike if you do read my blog please let me know if everything is OK, people were asking about you mate.

I was saying nothing, but Chequers was where I wanted to be or certain pegs up Newbridge. I have won this match twice from Chequers, totally different conditions, and some of the pegs would have nice slacks due to big trees in the water. I was quite happy to draw peg 98, as it was down the Chequers, but it was just above the straight so not what I thought would be best, remember I used to fish here when I was a junior so this is a bit of river I have fished a very long time!

I drove to the river with Steve "Stretch" Saunders following me, and he said he thought he hadn't fished here for 25 years. We helped each other lift our gear over the gate and then walked to our respective pegs. Got to mine and Nigel Wyatt was already there, he was having a look to decide if he would fish. Nige was on 97 above me, his peg had a nice bit of steady water. then there was a swim not pegged (it had a slack) then it was mine... it looked pants. I was gutted that once again I had a peg with lots of boils and turbulence, but there you go that's my luck at the moment. Nigel went back to get his gear and I got on with setting up.  I plumbed up with a 40g straight lead, and I had lots of snags in the peg from close in to two rods out it seemed, but settled on a spot and hoped for the best. I only set up one feeder rod, with a 3oz tip in , with a size 12 to 0.17 for the gbait feeder. The feeder was a 60g Preston job. 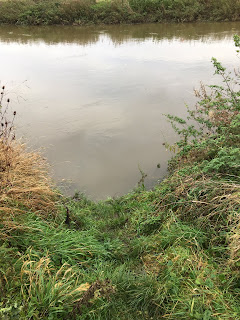 We started at 10am and as the match was starting I had Mandy Welsh wife of Gerry Welsh behind me watching. Mandy's parents and mine were both farmers and friends and we've known each other for years. I nearly fell out with her when she said mine was the worst peg she had seen lol! I had a couple of casts and then lost a hook in a snag, Mandy had seen enough and went home. Glenn Bailey rang me after 10 mins to say he had two already up at peg 76 on the Crane so he was looking good. I was still waiting for a bite when at 11am the guns fired at Keynsham, at 11:02 they fired again and Glenn rang me again to say he had 8 small roach, I was just saying I hadn't had a bite when I wound in a 1oz dace. Next chuck and a 2oz roach rattled the tip, both fish had fallen to a dendra and two maggots. Those two fish were all I had for another hour, well other than lots and lots of leaves which pulled my tip right over within seconds every cast despite only fishing a rod length out.. 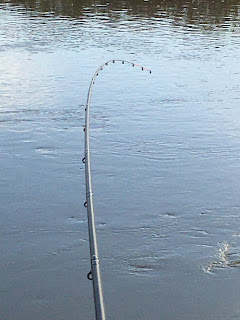 The rest of the match the peg got worse, I lost a feeder, lost more hooks, had to go up to a 75g feeder to try to keep out of the snags. Another 2 dace and 1 eel were all I put in the net, and I only missed one bite, well other than when I reeled in a big stone with 2 snails that had somehow snaffled my lobworm! Most anglers at Chequers with a slack had some fish, and Nigel above me had a skimmer and 10 roach, he was able to hold with 20g initially. Stretch had a lake and was fishing with a 1oz tip that was hardly bent and he had 3 kimmers early on. I tried but couldn't see any bream wanted to hole up in my peg, and with 20 minutes to go and a packet of hooks now lost I called it a day.

I threw my 5 fish back as there was no chance of coin for me.

I was the first angler back to the results and the organisers Ray Bazeley, Paul Benson and Colin Ellaway would have known I did crap, but I still told them of my shite peg lol! As the anglers started to return it become evident the river had fished really hard, not surprising given all of the cold rain.

Winner on the day was Craig Fletcher with 19lb 12oz from the upstream peg at Chequers, he had 4 bream and some nice roach, and he told me he had a nice steady peg but it got more boily as the match went on. Got a nice photo of Craig, I won't say what I said to him to make him laugh. 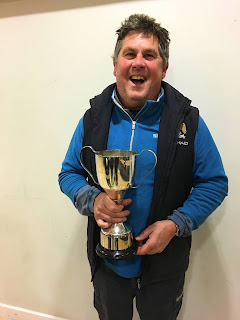 2nd was Mike Jefferies from Bath Spartans, he was actually on the peg number below me, but he was a god 200+ yards downstream on the straight below the cow drink, Mike had 2 bream and a skimmer right under his rod tip.

3rd Kev Abigail who had a good first half of the match on the pole feeder from around peg 109 in the Trees, some nice roach for Kev.

4th Andrew Cranston with 7lb 11oz from peg 16 at Newbridge on the pole feeder. This kid draws better than anyone I know.

Stretch was 5th, and so 3 of the top 5 had come from Chequers.. so near yet so far for me.

In the end it only took 3lb 4oz to come in the top 10, and the Crane was woeful with 1lb 2oz being top in the 20 pegs. A really tough match for many anglers and that includes me, but I would rather be there giving it a go than being at home. As ever Ray put on a good show and I hope we managed to raise some decent money for the Poppy fund. Now, is there any chance the rain could actually just do one for a while!
Posted by Tim Ford at 20:26