I was looking forward to helping the team out on the final round of this league, but I was struggling to find the time to get the prep done. I went to Shrewsbury on Saturday to watch Bristol Rovers, Lucy came with me and we witnessed a great game with the Gas winning 4-3. I probably celebrated a little to hard at the Cross Keys pub that evening, I blame it on Shaun Townsend.

Woke up Sunday morning and was a bit jaded and despite getting up well early I still only managed to get to the draw with about 10 minutes to spare. Shaun drew for us again and we really wanted peg 1 or 7 we thought, but Shaun came back with middle peg 4. I was in A section and that was the Long Pond in the town, very happy with this. As I rushed out to get to Bath I had a call to say I had not taken my bloodworm and joker, so I pulled over in Keynsham high street to wait for it to be passed on to me, whoops.

Parked up the Hill from Sydney Gardens, and Glenn Bailey and Jeff Surmon were also parking up here. It was only a short walk to the canal and I was hoping I would be in the wide part of the pond where I have caught skimmers before. Sadly for me I was just past the wide part, and I was about 13m to the far bank. Peg 5 was the plumb draw, Nicky Johns ended up on that as his peg 6 was behind a moored boat, and nobody had drawn peg 5. On end peg 7 was Mike Goodhind. To my right on peg 3 was Jeff Surmon, and the other two anglers in my section, Nick Coles and Rich Whitmarsh were in the lower pond before the road. Picture of my view. 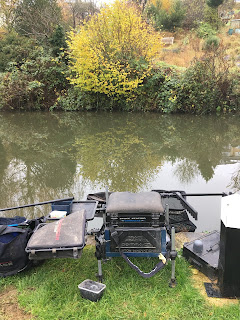 We started at 10am, I fed a decent ball of bread on top set plus two sections, a big pot of joker at 13m off to the left towards the wides, and fed casters to the far bank. I dropped in with a piece of punch, and the float went under but it was only a 1/2oz roach, I had another two then a nice 4oz roach, a couple more widgers then nothing. The bites just stopped, I couldn't believe it as I was expecting a lot of bites here. I was now thinking I might need to feed some joker short if this was going to be hard, but I tried swinging the rig out far past the feed first. The float buried and a 6oz chub was a nice little bonus, more bites followed from small roach and I could get bites anywhere but over the feed. I added another section on and fished out here and caught a few more roach, I began to think that maybe the fish didn't want to come in close, so I fed a bal of bread on this new line. Well it didn't help and I was soon fishing further out past the feed once again! This was quite strange and not something I've experienced before. I took a 6oz hybrid and an 8oz skimmer as the first hour ended. I felt I was a little behind Jeff, and Nicky had already had a good skimmer and a chub on a waggler but wasn't getting many bites.

I was able to keep catching on the bread and all of a sudden they were right over the feed, still small roach with the occasional better one, and I did get another skimmer about 10oz.  Nicky then took 4 skimmers in 4 drops on the pole and he was now ahead of me. My worm and caster lines were very poor, just a small rudd and a gudgeon. A few tries over my joker with positive baits was no good, just tiny roach and a gudgeon. The only way I could keep bites coming was on the bread but the size was small.

Probably about 2 hours to go I noticed the odd bubble coming up over my joker feed, I went out with 4 bloodworm on the hook and the float just sat there this time, no small fish bites. It took an age to get a bite but it was from a little skimmer just what I needed. Back out and more waiting, but Nicky was now catching on the waggler, skimmers up to 2 1/2lb and I needed some of my own. I did catch another 4 skimmers on this but only one of them was about a pound, but still they were better than what I was catching before. As soon as the bubbles stopped the tiny fish were back and the skimmers were gone. I decided to feed more joker and hope the skimmers would return, sadly they didn't. They were happily sat in front of Nicky and he was doing a great job of catching them.

My last hour was not great, but I could catch little roach on bloodworm every drop, but I kept looking for better fish, I did have two 3oz perch of the caster line to end the match.

I had enjoyed the match, plenty of bites and a few better fish, but I was smashed by Nicky for sure. The scales told the tale, Nicky had a great 23lb 6oz. I had 9lb 15oz, I did have the bonus of getting the section money by default so a bit of money to cover the day out. 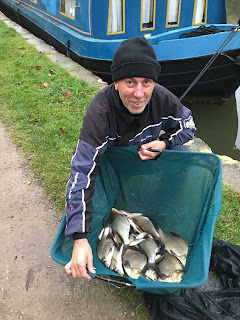 I can't complain really and I enjoyed the day. 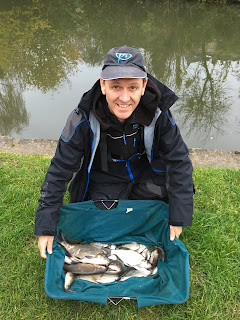 Back at the results and it soon became apparent that the canal had fished well in the town and pretty hard out of it. My team had done well we thought and it turned out we won the day by 1 point and so we won the league overall, well done lads. The B div was won by Ivan Currie's Sensas Nomads and so they are promoted to A div next year.

Individuals on the day

The top individual in the league was Nick Coles, well done some good performances from Nick.

The knockout was won by Vince Lunn

I won't be fishing next weekend, but then it will be a few Xmas matches I hope.