The last winter league fished on this venue a couple of weeks ago was all about bleak as the river was bank high, my team won and the same team was supposed to fish this match. However, with a couple of anglers missing I was drafted back in. This was nice but it was a bit of clash as Saturday night I was going out with my wife to a gin party.

Despite the rain we had in Bristol in the week it seemed further up river it was not so bad, and Lee Trivett looked at the river on Saturday and reported some pegs were definitely float fishable. That was useful information and I was able to get my gear prepared quite easily on Saturday. The gin party was a lot of fun, drank a lot of gin, tried a lot of gin, and bought a lot of gin. Sunday morning alarm at 6am and thankfully I was feeling OK, guess the tonic water kept me hydrated lol.

I got to Spencers club in Melksham and had a nice couple of sausage and bacon sarnies, think the rest of the team were pleased to see me looking OK and not off my head on gin. It was Shaun Townsend's duty to draw for the team since he hadn't done it before. As I don't really know the venue, certainly not what pegs hold what fish, I was hoping for a flyer, I ended up on the last section at Chippenham in the town. My peg was on the lifebuoy and I was told it was a roach peg with a few perch, pegs below me had a chance of bream, and the last two pegs were below the town road bridge.

I forgot to take a photo of the peg, maybe I did have some gin effects after all, and so will do my best to describe it. Far bank is metal pilings to shore up the bank as the flow was definitely faster across there. Some sedge reeds below me were leaning out in the river but didn't cause me an issue. The flow on my side of the river was still a little pacey but I was happy to run a float through it. I had it in my mind to fish running line, and I set up a 14 x no4 stick float with 20 N30 to 0.10, and a 4g bolo with 18 N30 to 0.11. The river just got deeper the further I went out and it did cause me a bit of a headache wondering where to fish, maybe a pole would be be better.. no I left it in the bag. I did set up a gbait feeder and needed a 2oz tip in to fish this, I stayed positive with 0.15 to 14 N50.

The match began at 10:30 and I threw 5 balls of gbait well down stream about one 1/3 out. I had put pinkie, caster, hemp and worm in the gbait. As I did this the angler above me Dan McDonald proper balled it in and I would have to keep my eye on his catch. I ran the stick over the gbait and the first five runs through were biteless, but then a bite and a tiny roach. I was struggling I had another small roach and noticed Dan had come off the pole running a rig through to a pole feeder. He soon had a roach and then had what I thought was a bream. My first hour passed with little more than 1lb of fish, I had tried feeding nuggets of gbait with no reward and had begun loose feeding caster and hemp and stopped the gbait.  Whether the loose feed had an affect I don't know but I started to get more bites and a few roach were now gracing my net. About 90 minutes in I struck into a much better fish, and was glad I had the 15 feet rod in my hand as I gave the fish as much as I could. Eventually I netted a nice 2lb chub which cheered me up no end.

Bites were coming but not every cast, I had another nice fish though, a 1lb perch, but the stick float wasn't really doing it for me. Dan above me had been catching roach and had a perch and a chub, so was still ahead of me. I tried the feeder for a few casts and had some small roach taps which I didn't hit. Going onto the bolo I had a better run and took some roach on double maggot. When bites stopped I dropped the feeder in and had roach taps again, so I thought I needed to put the odd ball of gbait in and this seemed to keep odd bites coming in conjunction with the loose feed. I was getting bites from on the gbait to 20 yards below it. I did have a pike in the peg, but thankfully it was right in by the sedges in close and it went for the fish at the last moment exploding on the surface, gave me a fright a few times. The peg seemed to be going away from me and I was gutted when I hooked a fish a long way down the peg which came off halfway back, felt like a very big roach or a skimmer.

With about two hours to go my swim was shot, and after a quick chat with Guy Manton I decided I had to give the feeder a good go. I managed a 6oz chub on a lobby tail but that was the only bite on that bait, and all my attempts on dendra failed to produce a bite. On with the 3 red maggots again which might be snaffled by a roach but it wasn't and a better bite resulted in a 12oz skimmer. Two casts later on the same bait and a really good bite and I was attached to a right lump. It was a really good scrap in the flow and I was feeling the tension as I felt this was a very important fish, eventually a lovely bream of between 5lb and 6lb was mine. I hoped more would come as there was still 90 minutes to go. However, it was a one off and other than a roach I was bite less. Dan above had a couple more bigger fish and I needed something. I rested the feeder and ran the bolo again, I took three roach and nothing else.  Back on the feeder and the rest worked, a 1lb to 1.5lb  skimmer and with 20 minutes to go a near 1lb perch.

I thought I had maybe 15lb at most, I kept going through what I caught but couldn't decided how many roach I had. As we packed up the light rain that had fallen for a while became heavy and soaked everything. The scales arrived and started on peg 1 with the legend that is Gary Etheridge, he had roach, 2 good perch and a bream for 12lb 14oz. Next Dan had 17lb 2oz, but his early bream wasn't a bream, it was a trout! Next me, and I was very apologetic to Dan when I weighed in 20lb 12oz, I never thought I had anything like that! Probably cos I haven't caught anything for bloody ages lol! 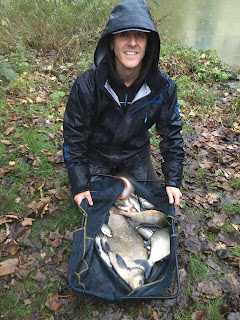 Below me the angler had 11lb 10oz of roach, and the next angler had 10lb 7oz of roach. Below the town bridge was Dave Micklewright, and he had 17lb 10oz, roach some skimmers and chub. With Dave Clapton on the end peg having 6lb I was confirmed as the section winner, so £40 for me.

The river had fished well today, and had the pace been a tad slower I think even more might have been caught. Top six:-

Gordon League smashed the match on the team front, Lobbys were second and Thatchers 3rd.

Overall Gordon League are now winning on 9 points, Blackmore Vale have 10 points, then Thatchers and Lobbys have 13 points.

Next week it the Commercial House final round, and it's on the K&A Canal, so more changes on the tackle front for me to be ready.
Posted by Tim Ford at 20:50