My first trip out in 2020, and I was looking forward to a day sat in the sun despite the cold temperatures. I didn’t have any preparation to do as all my rigs were ready from the last time I fished here and left them all at home!

Glenn Bailey picked me up in his van which had taken him a while to de-ice. We left at 8am so not early at all, as the draw time at Hillview is 9:30. Martin Rayet and Joe McMahon were also fishing and were taking ice breakers just in case, but the canals and lakes were all free of ice. I had one of Keith’s nice breakfasts and then got the gear out of the van, realising I had left my boots at home! I had 4 layers of socks to try to keep warm but trainers getting wet would not be good, Joe came to my rescue and borrowed Keith’s boots, thanks both!

I was towards the end of the draw queue and was hoping for 95, a peg both Glenn and I had discussed drawing. I got peg 76 middle of canal three, Glenn on 53 which is pants. Joe and Martin had the last two pegs  getting end pegs 42 and 95 respectively, drawbags lol. 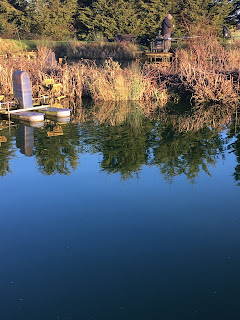 I began dobbing bread across whilst Steve started on maggots down the middle as he had felt fish when plumbing up, he had one straight off then lost one. I had a carp and a F1 in the first 15 minutes so kept at it, I wasn’t getting many signs and was trying different spots, in the end I found a few off to the right. After an hour I was doing ok compared to all on my canal bar end peg I think 80, he was doing well dobbing. I carried on dobbing for another hour, then went onto the maggot rigs.

Maggot next to the aerator was a let down with just two small F1 and bits, straight out in front yielded 1 small carp and no more.  Nothing doing in the margins either. I went across the canal and tried the maggot and after a couple of Rudd had 2 carp, then after a while a couple of small F1. I moved further left and started again, a few fish here before going dead again. Neither line came back to life.

Going into the last hour the angler on 72 had a run in his margins and although I had not had a bite here I gave both sides a good go. I took a 2lb carp on the left then bumped one and tried right where I had an immediate bite and an F1. I took 1 more from either side and then a nice F1 straight in front just before the whistle. 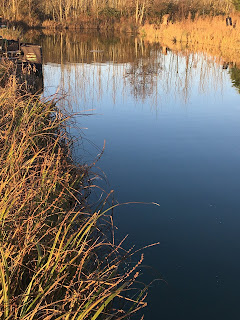 I’d had a steady day, wasn’t going to win anything but on a frosty by sunny day it was great to get the float to go under a few times. I weighed in 38lb which was beaten twice by the end pegs who both had 54lb. Steve next to me had 26lb and the angler to my right DNW, I guess Aaron doesn’t know everything then, but then he does support Bristol City lol!

Martin Rayet just won the match with 60lb, Lee Payne in end peg on canal 2 had 59lb for second. Joe won his canal too, so every end peg at the left hand side won money. Glenn couldn’t get a sign and had a handful of fish and packed up early.

I’m going to fish Newbridge on the AVON next week, it will still be high but the colour will be ok, fingers crossed for a few big drop backs in the feeder. Hope this blog comes out ok as my laptop is updating to windows 10, something I put off and am now paying for trying to update it, currently 2 1/2 hours in and still a long way to go me thinks!
Posted by Tim Ford at 20:57