It seems a long time ago I was able to fish the river, the rain has been relentless and the small windows of good conditions were generally when I was at work. The river had dropped to 0.8 metre at Saltford measuring station, that would usually mean a fast river, too fast for the float.

I got to the river at 8am and paid my pools to Dean Harvey who was running the match. I was quite surprised to see the river not to pacey at all and certainly float fishable, I guess the usual river height to speed is not the same as the river has been up for such a long time. It was good to see the lads, and it was the first time I had seen Ben Rendall since he managed a high frame place in the Riverfest final, an excellent result. Jeff Surmon told me he and Nigel Wyatt had fished the K&A Canal on horseshoe pond where he had won the Comm House Xmas match, the both blanked, packed up and went to the pub. I said they must have drank blanks bitter....

Dean got the draw underway and everyone wanted peg 59 which had won the previous couple of matches, that peg went to Mike Weston, and Ben Rendall got 61 which was end peg, I would have liked them! I was on peg 36 on the straight, a great place for bream over the years, but not for the last couple of seasons it seems. I had Jerry Pocock above me on 30, and on peg 38 was Derek Coles, if the bream would feed these guys would catch them. As we chatted on the bank a jogger ran past us, had what appeared to be see through leggings on, shame it was a bloke. Derek and I were in shock!

Tackling up didn't take long one feeder rod with a 30g feeder, 0.15 to 14 N50. A 4g bolo float with 18 to 0.11, and that was it.  The river was quite clear and I thought my best chance of doing any good was to try to catch bream on the feeder, the float would be used to rest the feeder and most likely break up the boredom if I didn't get any bites on the tip. 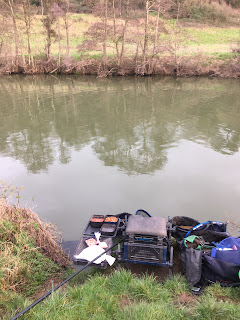 I spent the first hour of the match on the feeder getting plenty of caster and worm in the peg, throwing the odd ball of gbait in close for the float line. The first hour passed without much incident just a couple of roach on the feeder and only one other bite. After another 20 minutes of nothingness I picked up the float rod and gave it a go. The first two runs down were rewarded with small roach right on the gbait. The next two roach were even smaller and were caught much further down the peg, and after this I managed another 3 small roach a long way down the peg and then no more bites.

After resting the feeder for 20 mins I went back out on it and put 3 red maggots on the hook. Not long after I had lovely drop back and was attached to a better fish, it was a near 2lb skimmer. I thought it might be the start of a few bites but sadly another hour passed with just one bite and missed as the worm had doubled over the hook. Another look on the float was very poor and just one small roach was caught. The rain was by now hammering down and I was glad I had brought my brolly and it was doing a good job of keeping everything dry. Back on the feeder and again nothing was happening it was all very slow. Derek above me said he had 2 skimmers and some tiny roach, and Jerry had a couple of chublets and a few roach, not much happening for any of us. I had another skimmer on the feeder but this one was only about 10oz.

About two hours to go I tried the float again and for about 20 minutes I had quite a few bites from roach, I put this down to me cutting out the gbait and loose feeding maggot and hemp. However, the river had now started to get some colour in it and it could have been this too. The bites soon stopped and with 90 minutes left of the 6 hour match I was back on the feeder hoping for a few late bronze bream to go on the feed which they can often do. I was really surprised as I had a bite almost straight away but from a small roach, and next cast another. It was completely different now, a bite every cast on red maggots from roach. I tried a worm to seek out the bream, but I caught roach on this too, albeit after a longer wait for a bite. Trying triple caster got me three nice roach two of which were probably 10oz. During this period I fed a large amount of caster and worm through the large feeder, but the roach didn't go away and I guess there was no bream in my peg and I never managed to snare one.

Derek came straight up to see me after the match to tell me he had a bream with 10 minutes go, and Jerry came up to say he had 2 skimmers in the last 10 minutes but not a lot else.

Derek had 12lb and this was enough for him to win our section. 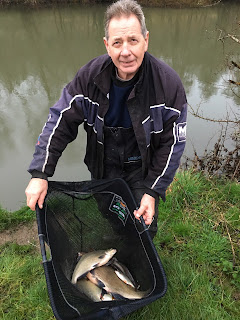 My fish weighed a level 8lb, so I guess I had a very similar amount to Derek just missing the bream. 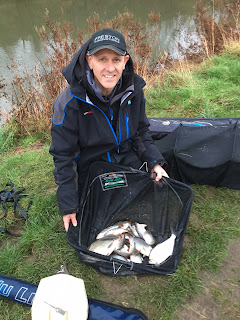 Jerry didn't bother to weigh in, but on peg 43 Jeff Surmon had 10lb which was mainly roach and one skimmer. He caught some nice roach on the float and lost an estimated 2lb roach at the net.

It was nice to get back on the river, I was happy with my set up and never lost a fish on the feeder, I have been using the 12 foot Preston Supera feeder rod this season and have to say I really like the rod, it casts well and has a nice action. The Preston Natural N50 hook seems to be a decent hook for feeder fishing on the river and has replaced my discontinued PR355 range.

No blog for a couple of weeks now but then will see what the river is like before the season ends.
Posted by Tim Ford at 20:16