The most important thing for me today was making sure I packed my water proofs and umbrella, though the rest of my tackle was also going to be important I hoped. I got to the draw in time to snare a couple of bacon rolls and a cup of tea, talk was of the good weights that had come out on Wednesday on a little knock up, with Derek Coles winning that with 30lb of hybrids off peg 22. In my view Newbridge fishes well to begin, but gradually the weights declines as the matches take their toll. All to soon the draw was done and I found myself on peg 20, a peg I have drawn a fair few times and I seem to draw this area a fair bit.

On arrival at my peg I was able to talk to my knockout opponent Andy Britt, and his team mate Darren Gillman, their captain Kev Dicks was on the next peg above me. On the peg below 22 was Brian Derrick. I wondered if those Hybrids would have moved up into my peg, or moved down in 22A where my team mate Nick Chedozy had drawn, time would tell. I know that this peg is best fished on the pole at 13m, this is where most of the flow is, and fishing across for chublets is also a good bet. This is my view of the peg.... 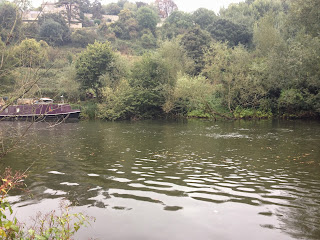 As you can see I was a good 6 feet off the water! 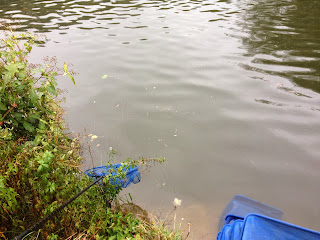 Setting up rigs for the pole today was fairly simple as the river was still clear and very slow, a 1grm pencil rig with 0.10 to a 20, a 2grm rig with an 18 to 0.12, and a 1.5grm worm rig which never got me a bite today. I set up a maggot feeder for fishing across with 0.14 to a 16, I didn't fancy the waggler as this peg is very wide and a lot of leaves would make it tricky. I was hopeful those hybrids would be near, so I threw in 14 big balls of gbait full of casters and hemp on my 13m line. First drop in and I hooked a 4oz roach which I dropped trying to swing it (dickhead). Not to worry as I had a bite next drop in from a 2oz roach, and for 15 mins it was just these small roach that showed on caster, then the elastic came out and a 12oz hybrid was netted. Here we go!!!! Errr no! I could get bites but they were awkward to hit and from mainly small roach. The pencil rig was best and I was fishing about 6 inches off bottom as I was getting bites on the drop, and the occasional 4oz roach showed. Another hybrid of 1lb was landed after an hour and I was quite happy with my start.

Things started to slow up in the 2nd hour and the roach were getting smaller, then I hit a decent fish on the 2grm rig which pulled out a lot elastic. It swam for the inside and I guessed it was a chub, I pulled the pole up hard and then a perch of well over a 1lb surfaced and threw the hook, nuts! I had started to loose feed hemp on the pole line but things were getting worse not better and not helped when a pike turned up and did a few hook lengths. The rain had been falling very hard and my maggots were trying to escape, so I went up the bank to get a bit of brown crumb and then decided to see how other anglers were doing. Kev said he had well less than 4lb, and Andy Pritchard thought he had 4lb, so I was ahead just.

My pole line was now barren of fish it seemed, but alive with boats! There were loads of boats today, and at times you couldn't fish, I took this photo as evidence, note the boat in the foreground is resting over my pole line, the boat across resting over my planned feeder line... 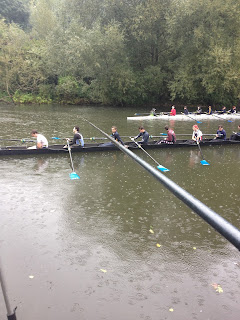 I had a bad third hour and then decided to try adding some more groundbait onto the pole line, but rather than ball it again I cupped in 4 balls and had a look on the feeder, which was a waste of time. However, the pole line came back to life with small 2oz roach and I was now getting these every chuck and kept plugging away until it died off and I couldn't revive it. With 45 mins remaining I decided to go all out on the maggot feeder for chub, I didn't catch one of them but I did manage a couple of perch, a roach and a 12oz hybrid. When the match finished I wasn't sure if I was wet, cold or both!

The weigh in started on peg 14 where Chris Higgins was thoroughly soaked and peed off, he'd been piked out (a monster) and had fallen in, lol, he weighed 3lb. Andy Pritchard weighed 4lb 15oz and then Kev Dicks weighed the same as Andy until he found a little roach in his net and gained 1/2oz, Kev then went to get his box out and fell in! I then plonked 10lb 15oz on the scales (which I think is more than double what Kev had, hee hee!) and below me Brian had 1lb 12oz. That sealed a section win for me worth £50 in this league, nice! I also got through the knockout as Andy Britt weighed 7lb+.

Once again the Avon had fished well with only one section not won with double figures. Winning on the day was Nick Chedzoy with 35lb of hybrids (yep they went down stream the buggers!) on the pole, well done matey.

Bathampton won again, beating Thatchers by 1.5 points on the day, and Thyers were 3rd.

I can't finish without mentioning Gary Cross. You may recall he had a last in section next to me last week, but this week being on the bream peg "54" he was surely going to get a few? Things went from bad to worse as Gary managed to drop in his top 6 during the match, a fish was on and it very slowly pulled the sections out of reach. Gary tried casting over it to retreive it, but then like a scene out of jaws a pike must have snaffled the fish and at a rate of knots Gary's top 6 gathered speed and disappeared into the far bank. Gary bagged another last section, I'm sure his luck will change soon.

Next week it is up here at again but on the Commercial House, more rain required please.
Posted by Tim Ford at 20:54