The day started well for Nigel Saunders, he forgot to change his clock and ended up at the draw before the gates were opened, lol! Some heavy rain overnight meant gave me cause for concern, as I expected it would effect the river during the day. Team draw done by Liam Bradell and I found myself on a long walk up the Crane to peg 75 just shy of the top of the ashtip, I was happy with that (the peg not the walk). Just before I set off a strange vision appeared before me, none other than Mike Nicholls out for a walk. Mike also helped out as Bathampton had forgotten to take the scales (doh) but then I found out there was no weigh boards either (double doh!).

Finally got to my peg to find once again Paul Purchase of Thyers next peg (74), we were next peg quite a few times last year. Leighton Warden was on the bend, and round the bend (literally) was Shaun Townsend. It didn't take me long to set up today, a feeder rod with 0.15 to 14 B611 and another with 0.17 to 11 B711. I did set up a big flat float but I didn't end up using it, as I never fancied a float in the end. I was sure there would be some bream / skimmers feeding today and this is why the feeder would be king, and to start the match I threw in 10 big babies heads of gbait full of worm and caster just shy of the middle of the river. I nice careful team approach you could say! I started on a 20g feeder with the "lighter" gear but 3 red maggots on the hook (usually a good bet) did not buy me a bite, so 25 mins in I started switching hookbaits around. This got me a roach and perch so at least off the mark. On 45 mins I tried double caster and within seconds of the feeder hitting bottom the tip slammed round and I felt a lovely solid thud.... a bream. As I was playing the fish Shaun Townsend appeared behind me and said he was struggling, he called me a James Hunt as I netted the bream. I was now looking forward to bagging a few more bream, despite the wind and rain bashing me straight in my kisser. Here is my peg, and rod position. 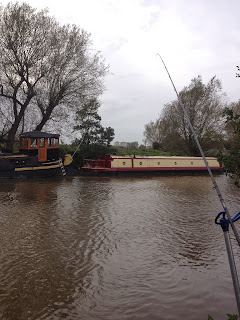 During the next hour I had another roach and perch but no signs of the bream, the rest of the section were struggling so I just had to keep plodding on. Unfortunately the middle of the match was appalling for me, and no matter what hook bait I tried, including lobworms, I couldn't get a bite except from the odd ounce roach. I did try a line a third the way out, but this was full of leaves and weed whereas down the middle I was not getting so much trouble but I did have to step up to a 25g feeder. With about 75 mins left I started to get bites again, either on a bit of worm with 2 maggots, or 3 maggots, sadly not from bream but roach. It was however interesting fishing trying to see and hit the bites, and although I never had any netters a few were up to 6oz (swing them on my gear) and it was a nice end to the match.

With no weigh board we had a whip round, I had a black marker and Richard Whitmarsh had a fag packet liner, what a joke! Richard below me had taken a few roach early on but then struggled, he ended with 3lb 14oz, I weighed 6lb 11oz, Paul 2lb 9oz, Leighton 2lb, and Shaun then pissed the section with 13lb including 2 bream and a skimmer, so once again he did me like a kipper, and I ended 2nd. During the match the river had risen slightly, speeded up and gained more colour, this had the effect of changing many peoples swims.

The match was won by Jerry Pocock with 24lb of bream, he was in the lane on the wooden platform in an area I fancied. Steve Priddle was 2nd with 20lb 12oz from next peg, and his team mate Mark Bromsgrove was 3rd with 20lb 7oz from my favourite peg (1st one in Long Ashtip). Can't remember who was 4th, perhaps I'd better just make it up, oh I remember it was Shane Caswell with 19lb 15oz, from peg 20 at Swineford, some bream on the feeder wouldn't you know!

On the team front Bathampton won again beating Thatchers by 1/2 point (ouch) and they now lead by 3 points from Thatchers. They were helped by Darren Gillman who went from last to first in section with a bream 15 mins to go, nice. I managed to get through the knockout today, and in the next round I have team mate Nathaniel Johnson, same in the Commercial House too!

Next week is round 4 at Newbridge. Hope this storm does not cause anyone any problems, fingers crossed. Oh and one last thing, a mate of mine is having a bit of a rough time at present and won't be able to fish the Poppy match it seems, that's a shame as he always asks me to draw for him and usually I get a good un and give him a crap peg! I would gladly give him the better peg this year, chin up matey.