I dunno sometimes what goes on with my sleeping patterns, a great Friday nights sleep was followed by a wide awake Sat night, and I heard a lot of rain during the night. I was hoping for a nice drop of rain during the week, but we never got enough to put proper colour in the river. Arriving at the draw today the car park was full, the additional parking field was shut due to the field being to boggy, and so I ended up parking on the main road. Then I had to pay Roy Carter a £1 for weighing more than me last match, before paying my pools. Mark Harper did the A team draw and came back giving me A section, this was a split section with 6 pegs up at Rotork and 7 in the little field. I was on the last peg in the section just above the road bridge on peg 13A (another short walk). I didn't fancy this peg in the section, I've never seen a lot come from it, and with Andy Power on Rotork end peg 27 and Shaun Townsend above him on 24 I would need a good net to beat them.

As I was setting up Gavin Messer came past me, then he came back saying he was up at Rotrork, 10 mins later he was back again and finally realised he was on peg 3 in the little field, lol! Not long after the Chippenham Italian Fab Legge came back for his mountain of gear and said his peg (1) was a jungle. Myself and Dean Harvey said he could fish in between us if he wanted (match organiser was OK with him moving) and he accepted. My peg had a slab in it (stone slab) about 8ft off the water, too high, so I went a bit lower down and sat on a small ledge. 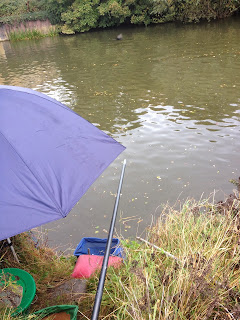 My set up for today was exactly the same as last week on the pole, but on the feeder I set up an open ender. Last week the peg below had been poor, but above had been good for roach so I was happy that my pole approach from last week would work again. On the whistle I threw in my 14 balls of gbait and picked up the 1grm rig and slipped on a maggot. The float travelled all of 6ft before dipping and a 2oz roach was swung in, same next cast but the roach was 1oz so on went a caster and no bites for 3 chucks, hmmm. This sort of start is not usually a good sign, and in the first hour the only way I could get a bite was with a maggot on the hook, but the roach were mainly small and I thought I might have 2lb. During the 2nd hour I was still getting bites from small roach, but I did manage a couple of 4oz roach on the caster. I also got a few other bites too, I felt some irritation on the back of my neck, then the side, then the front and found some red ants had crawled up on me, ouch!!

Going into the third hour the pole line really died quickly, and a look on my copped worm line produced a perch first drop then never another bite. I chucked the feeder out 10 times and then went over the top with red maggots, nothing. Back on the pole I had topped up with some groundbait and that brought 4 more small roach but no more. So on the feeder again but it was not happening, and it was all over when I managed to catch the hook in my finger on the cast and snapped the 0.14. The hook was right in past the barb (I did say ouch) and I couldn't budge it, so I wandered up to Fab and luckily for me he had some tools. Firstly we had to pull the hook point through my finger (now I was screaming like a baby) which took a few attempts, and then snap off the spade and pull the hook all the way out. I was tempted to take a photo but it was to painful, and I am indebted to Fab.

Back to my peg and I kept working the pole line, a run of roach soon petered out and then a huge male otter swam through the peg! This otter worked his way down river, and was the biggest I'd ever seen! Then a rain storm finally arrived and it lashed down till the end of the match as it turned out. I cupped in some more balls with a bit of worm in it. I did get 1 perch on worm on this long line, but that was it, very odd roach followed until the last 15 mins when I suddenly had a bite a chuck from the same small roach, all on fluro maggot. It had been a frustrating match with many dead spells and what seemed a swim full of tiny roach, though as it turned out many people on the river caught this same stamp of fish. I thought I might have 7lb of bits.

When the scales and board finally arrived in the little field my fears had been realised, with Shaun Townsend weighing a brilliant 15lb to Andy Powers 13lb (they ended 3rd and 4th overall too). Gavin Messer had 6lb 15oz which included a near 2lb perch, and below him Sam Johnson had just shy of 10lb, but he needs to learn to estimate better! The rest of the lads struggled with Fab having 3lb 8oz , and then I weighed 7lb 5oz which got me 10 points out of 13, and 5 out of 7 for the team.

Back at the results (the car park was full again) I found that a couple of my team had struggled and we weren't going to win again today. That distinction fell to the B team, and with Bathampton coming 2nd and my team 3rd it meant that after 3 matches Thatchers A and B are tied at the top. When the section winner money was called out I was shocked to hear my name, I'd picked up the money by double default, lol! My luck didn't end there though, as I managed to get through the knockout by beating Rich Lacey who weighed 7lb 2oz, that was close. Next round I'm up against Thatchers young upstart Nathaniel Johnson.

Winning the match today was elder statesman Vic Abbot with 30lb+ of bream from a couple of pegs below the newton st loe bridge, 2nd, from the peg above Vic, was Thatchers Colin Dance with 9 bream for 28lb. Colin tried for the bream on the feeder from the off, and after about 10 quick casts he had one on his first proper try, he never bothered with the pole after that!

Well that's another decent river match done, 12lb was needed to frame today, and that's good in my book. It seems we may well be getting a lot of rain this week and maybe we'll be fishing a more coloured, even flooded river next Sun?
Posted by Tim Ford at 20:26