A Wander Around Windmill Lakes

I took a look at the weather forecast and chickened out from fishing this weekend, actually got a few things done and earned some brownie points!

I knew that Rich Lacey and Shaun Townsend were fishing an open match at Windmill Lakes, a venue I have still yet to fish, and so I popped up there to watch the last couple of hours. There were plenty of familiar faces fishing today; Bob Price, John Clark, Martin Pettifer, Dave Haines, Steve Dawson and Paul Elmes. I wasn't expecting to see many fish caught considering the cold weather, but I was pleasantly surprised to find everyone had something in their nets. This venue has two islands which are in places reachable by pole, but in others not. 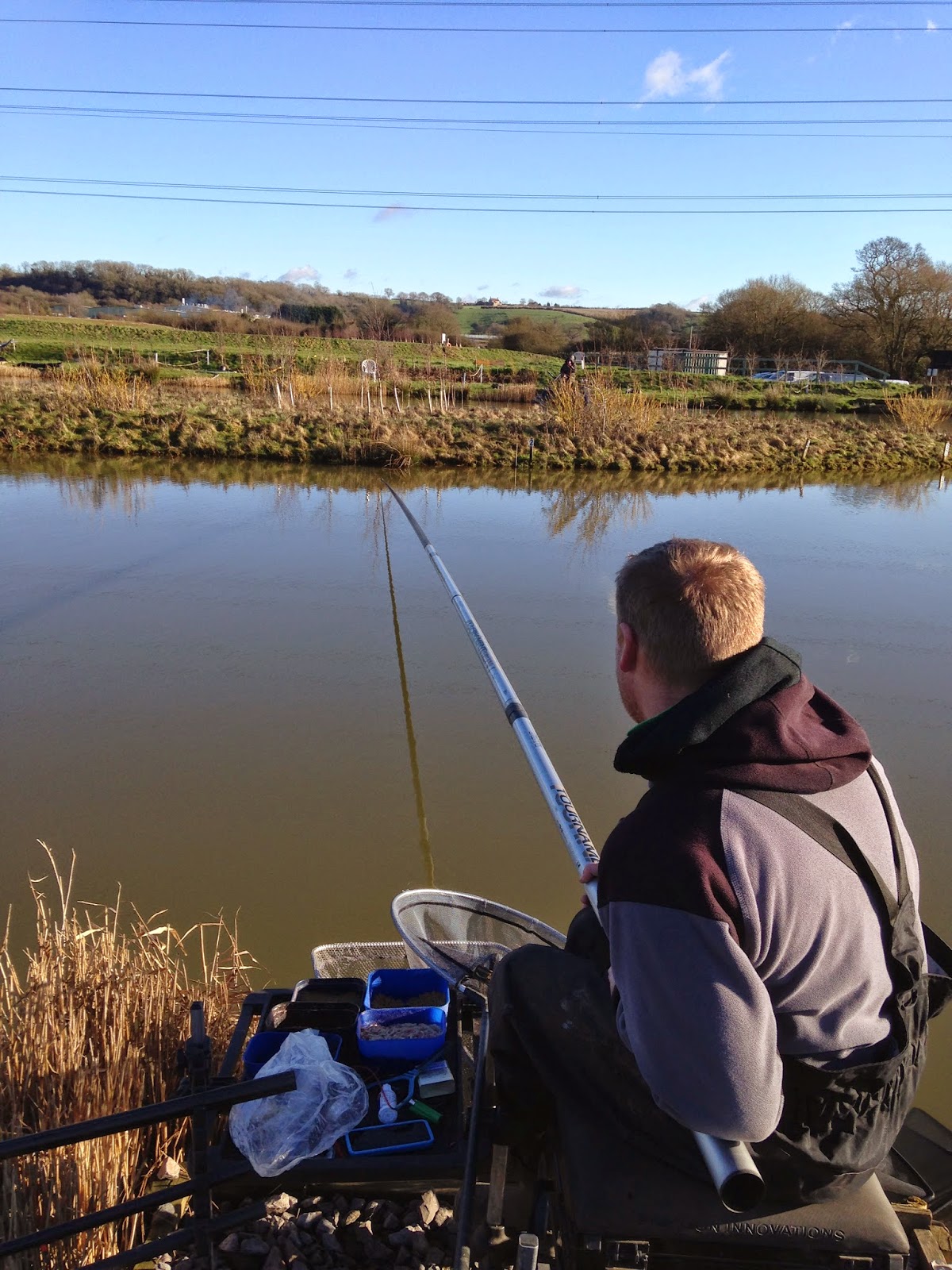 Steve Dawson was fishing for the silvers, he was on the dam end in the deeps and ended up with 8lb of them mainly on caster. Next round from Steve was Lace the Ace, he had taken 4 carp on 16m pole and pellet and one of them was 10lb 1oz. 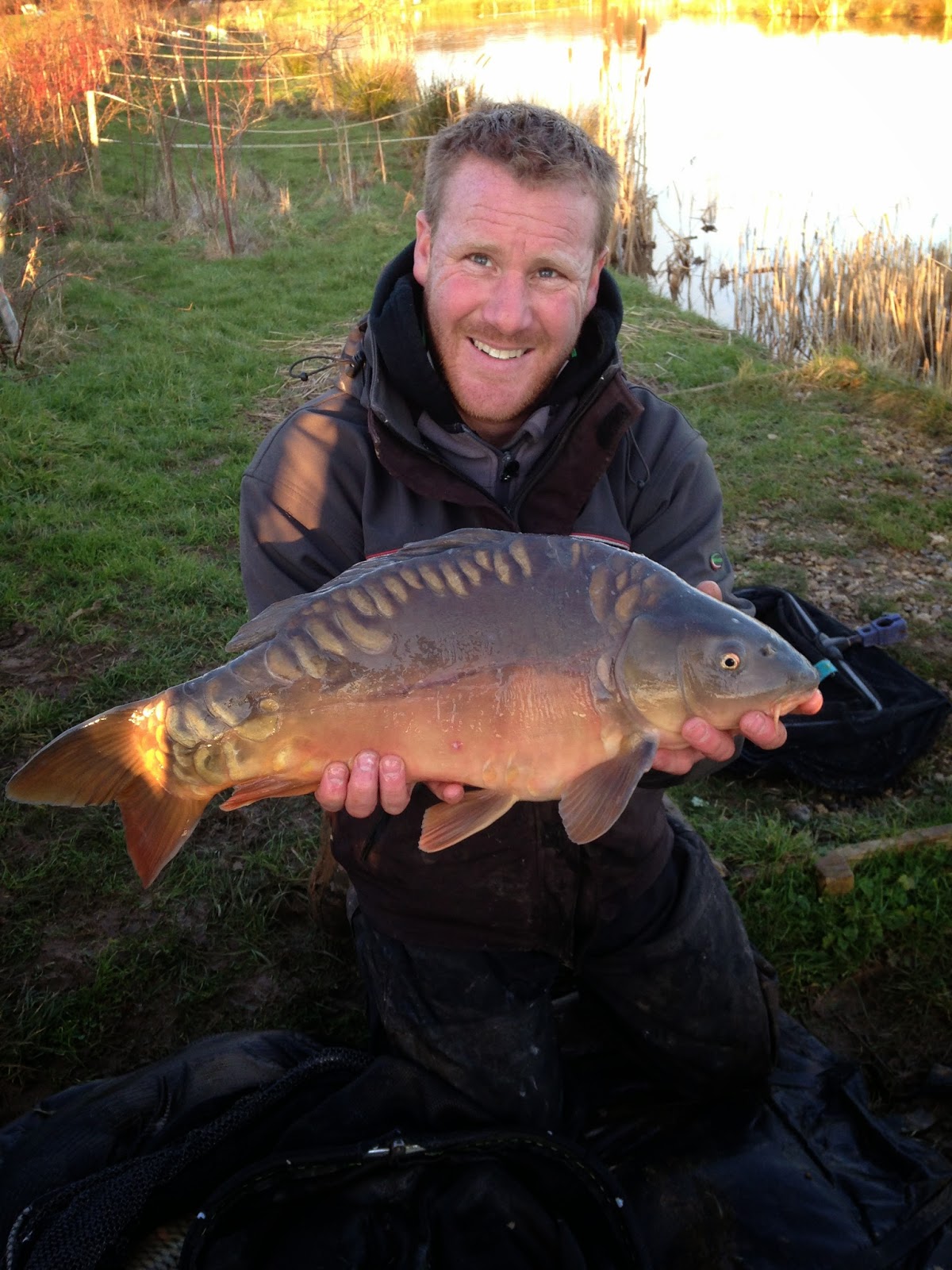 Rich went down the middle on maggot to rest his long line, and it was a bite a chuck but only from small rudd and roach. The next two anglers were struggling, and then down in the open shallower water, all on his own, with loads of room, was Shaun. He was also fishing a long pole at 16m and had 8 carp when I arrived, he was fishing meat over pellet. I managed to video Shaun catching a carp (last time I tried this he kept losing them!)


After watching Shaun catch another 2 carp and lose one his swim went iffy, so I wandered around the other side of the lake. Dave Haines who has been winning a lot of matches out here of late just had the 1 carp and lost a swan. Paul Elmes had taken 8 carp in the first half of the match but then couldn't buy a bite and finished out of the running with this bag of carp for 28lb. 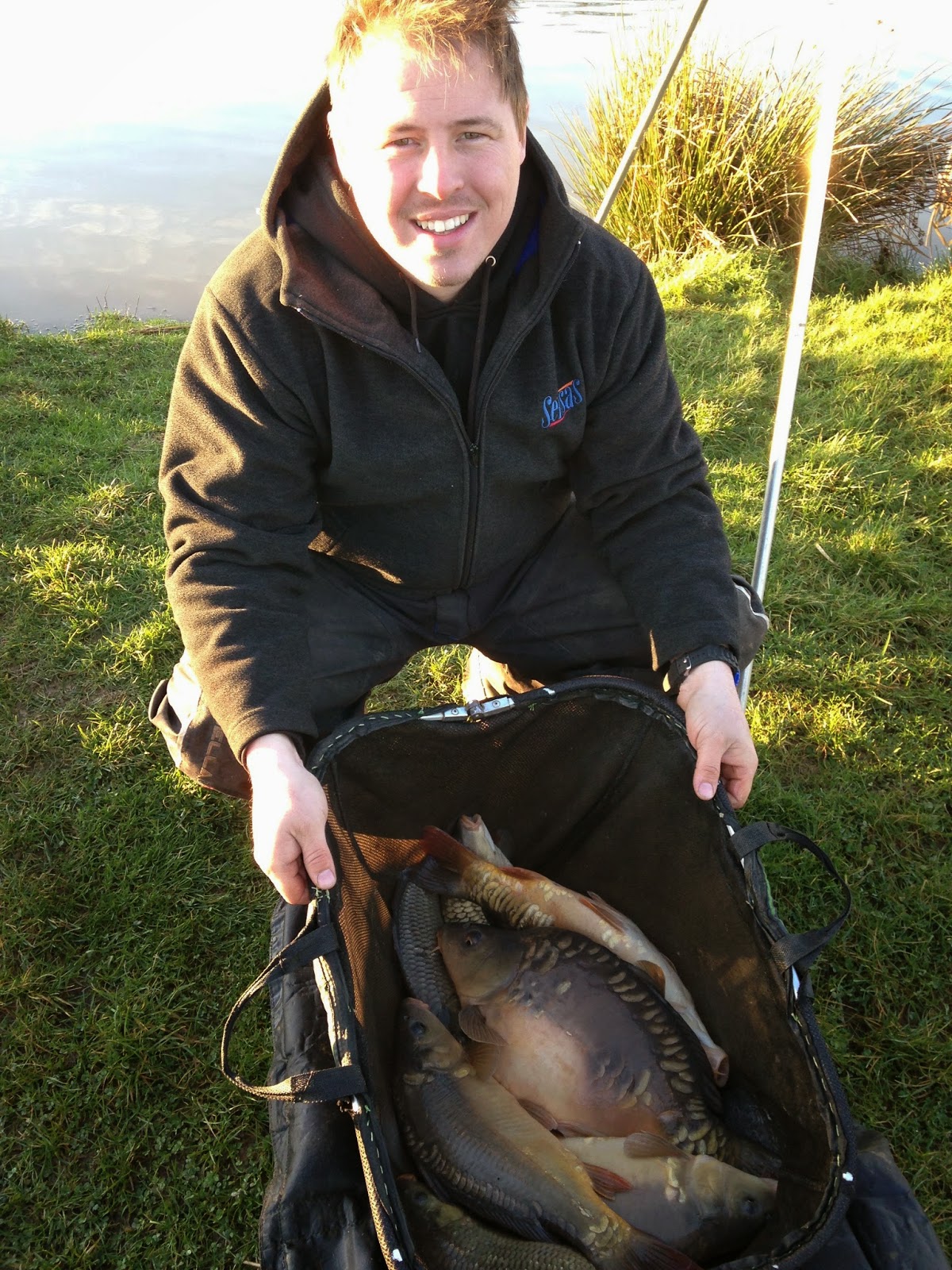 John Clark was in contention for a top 3 finish, he was catching on corn mainly and could only get bites in the deeper water so only needed to fish 10m of pole, He weighed 32b 4oz in the end which was going to be close to Rich Lacey. However, Rich had a couple of late carp that made the difference and he weighed 33lb 4oz which would be good enough for second overall, Rich caught on soft pellet.

I knew Shaun had won the match when the whistle went, but I didn't realise he had hooked a carp just before the all out, he finally landed it 12 minutes later and it was lovely looking 13lb mirror. 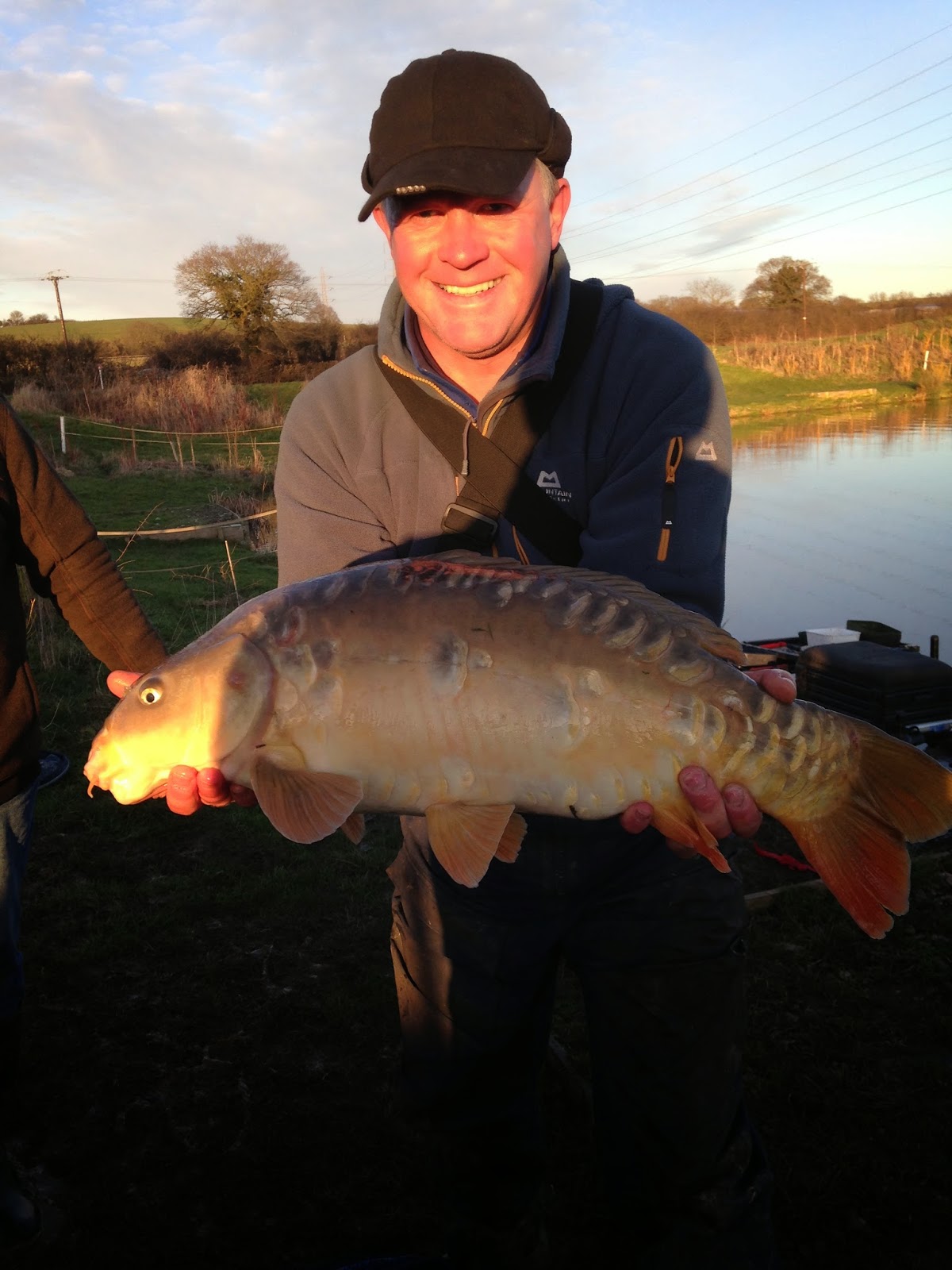 That added to his other fish gave Shaun a clear win with 54lb. 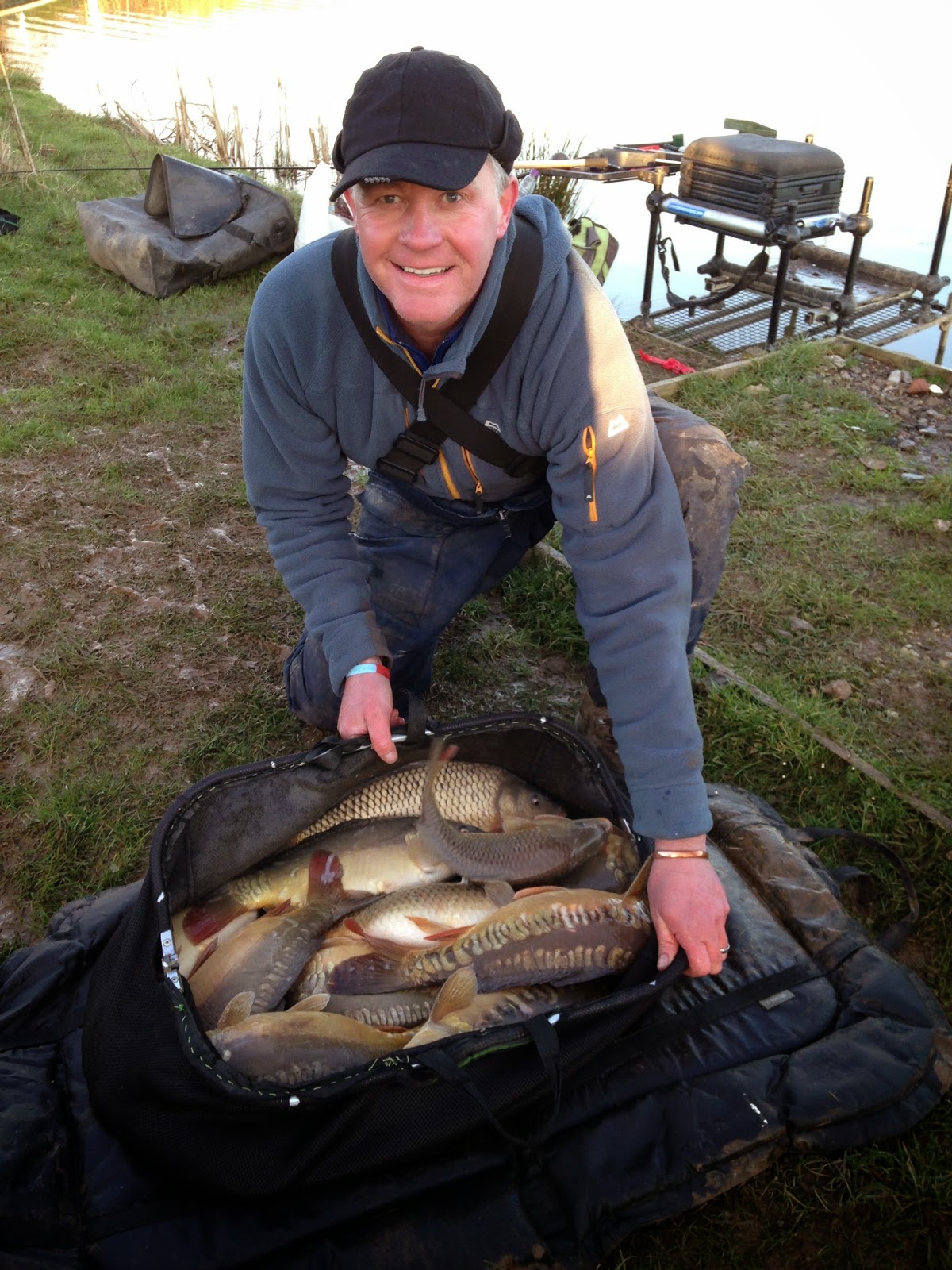 I was impressed with the healthy looking fish, very good condition indeed and some big belly's on some of the carp. What did I learn, or what can I say in conclusion. The winner caught on meat, 2nd on pellet, and 3rd on corn! Fish with what your confident in I guess, that said maggots and soft pellets did get ragged when the small roach were in your swim so I could see why corn and meat were a good bet. Whilst a few pegs struggled I would say the fish seemed to be spread around quite well meaning bites for all, all methods were used today, but the lead chuckers did not do well today, I guess cos the fish were not right next to the islands where they were chucking. I am sure I will give this a venue a go in 2015. As I left the venue and got onto the main road an umarked police span around in front of me and blocked the road, out got several armed (proper guns) police and more turned up. Thankfully they weren't pointing their guns at me but at some loon wandering around with a rifle, I didn't hang around to see what happened!

As for next week I think I am going to give Hill View a go on Saturday, I will probably get spanked but hopefully get a few bites which is what you want in the middle of a cold winter,
Posted by Tim Ford at 19:03