It feels like it has been a long time since I fished a match on a Saturday, it's also been a long time since I fished at Hill View. It was due to family plans for Sunday that I wanted to fish a match on Saturday, and having read various posts on facebook about the quality of fishing at Hill View I knew where to go. Originally I was going to take Glenn Bailey, but he chickened out worried that 5 pints of cider would mean he couldn't get up! I ended up getting a lift with Matty Toomes which was dead handy.

Friday was a manic day and it was all I could do to buy some maggots from Scotts on the way home from work, I checked my pole elastics, made sure I had some barbless hooks and threw in some old rigs that might be OK, so not good prep at all!

Travelling up to the fishery with Mat was very good as he was able to tell me about his 2 previous matches where he had picked up money. Hill View is full of F1s and these having been making the weight s and giving anglers plenty of bites. I've hardly fished for this species and have only read articles about catching them, I therefore expected to get a bit of ass kicking but learn lots. The turn out for this match was excellent, I think 44 anglers. It was good to see some faces that I used to see 15 years ago at Hill View, and Neil Mc Kinnon and Trevor Chalk were both kind enough to remember me, real gents and very good anglers. There was also a good "Southern" contingent in evidence, with Scott Puddy, Ben Haag, Ade Crawley, Martin Lenahagn and Gabriel Skarba plus more!

After a nice breakfast from fishery owner Keith (who asked why it had taken me so long to get the car turn North and come back lol!) I paid my pools and then dipped in the woolly hat for a peg. Out came 18, I looked at the map and saw I was on Moorhen with the island to cast to, it had framed the week before. Getting to the peg I found I had a Welsh lad next to me on 19, but 17 was left out meaning the island was all mine, nice! The weather was great, the sun was out and there was no wind and I found myself removing 2 layers of clothing. First thing I set up was a 2 swan insert waggler which I set at about 3 1/2ft and had 1 no8 and 1 no10 down the line and 0.10 to 20 PR434. This was to be fished quite a way short of the island away from the shallowest water. I was told by Trevor to fish like this and not to bother feeding, and I should catch some decent F1s. I set up two pole rigs, both PB Inter 3 floats, one was 0.3gm and the other 0.5gm both to be fished on the same lines. I chose a spot at 6m, and two at 13m which were virtually the same depth. These rigs also featured 0.10 and 20 PR434.

I didn't start fishing on the whistle at 10:30, but the lads either side chucked the straight lead, and then 5 mins later I was ready. I fed some maggot and micros on my pole lines and then picked up the waggler, then the wind blew a bit! The wind wasn't too bad but after 30 mins and no bites it was time for the pole, 30 mins later I was still bite less. Nobody was catching, and it was apparent that the thick ice melting yesterday / overnight had hit the fish badly. Then the Welsh lad next to me landed a 10lb carp on the lead, he had hooked a pole rig which was attached to the carp, lucky. I tried the wag again and think I had two indications, but it was getting hard to see the float due to the wind and the sun, which was shining right in my face. I took this picture after the match as I think earlier in the day the sun would have blinded the photo. 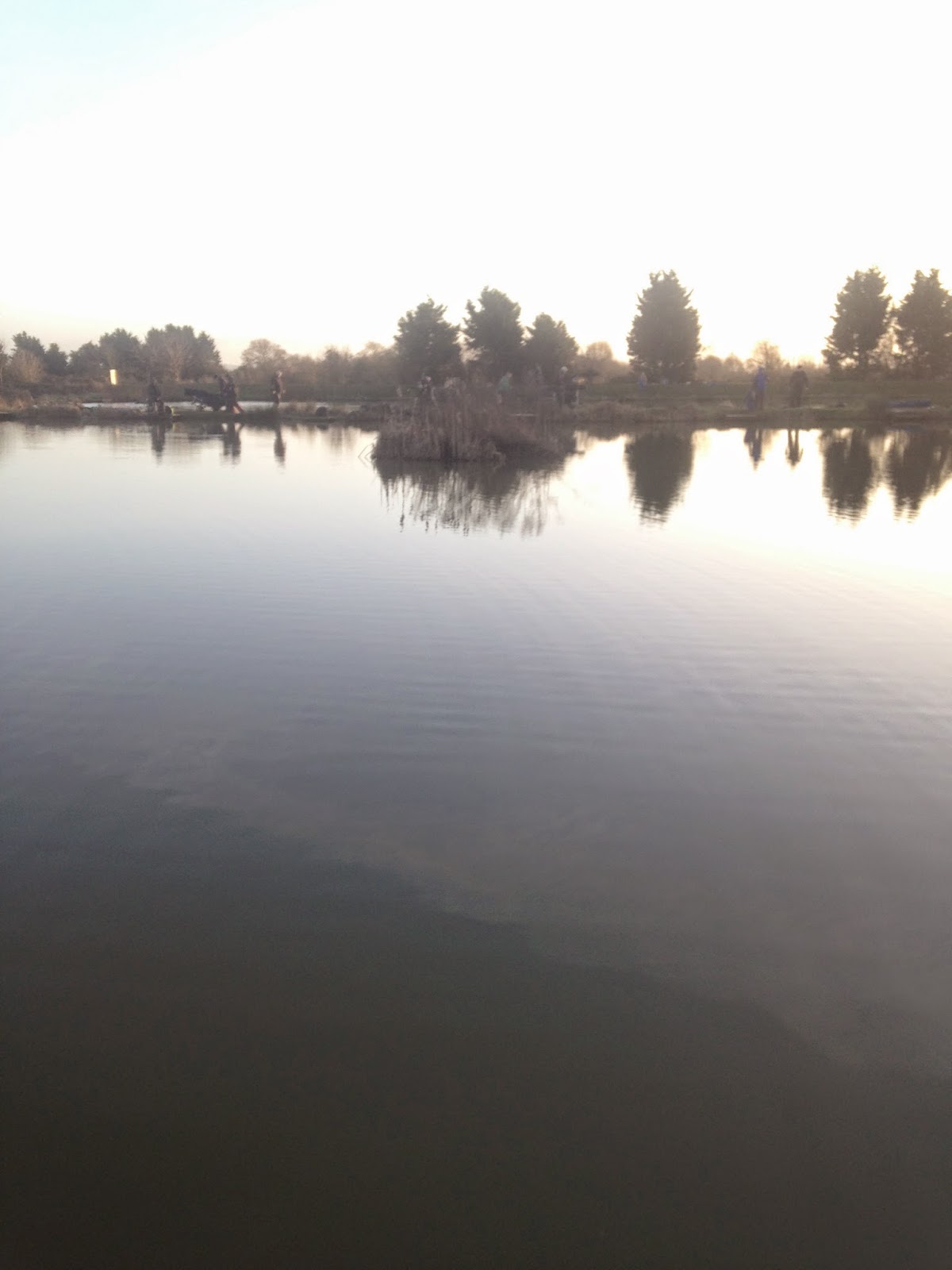 Back on the pole and I had a rudd at 13m, and then dropping in at 6m I hooked a carp which I knew was fouled, it came off after about 5 mins. I then hooked another carp on the drop at 13m, this was also foul hooked (in the tail) but after much ass twitching on the light gear I landed what was about a 9lb carp. About halfway through the match I had caught no more but lost another fouler. I then had a couple of roach off the pole lines and 2 skimmers in 2 drops on the 6m line. At this stage the welsh lad was still on 1 carp and the lad on 16 had 1 skimmer. Matty Toomes was doing OK and not much was being caught at all. I had not fished the wag much as the light and ripple was terrible.

With about 2 hours to go a few carp had shown themselves on the surface, and I reckoned my best chance now to catch anything was to fish the wag with maggot on the drop. I started feeding maggots as far as I could, and after doing this for 30 mins I picked up the wag. First chuck and a bite and a carp hooked, it was fouled but I landed it. Next chuck I missed what looked like a bite, and then 10 mins later I had another carp. The wind would blow up now and again, and when it did so I had to chuck the wag in a spot I could see the float, not easy! I spent the rest of match on the wag and stuck to single maggot on the hook as I wasn't getting pestered by roach. I hooked a few more carp by altering my depth and where I cast in relation to the island, I caught on and off bottom. I did lose 3 more carp, a fouler, one that went round the island, and one that when in close swam through a snag and left me with a ragged hook length, The welsh lad who had been fishing 0.13 hook length changed down to 0.10 and caught a few carp, less than me but he had another double! I caught a 5lb carp just before the whistle which was a nice way to finish.

I wasn't sure what I had, but I guessed 40lb, Matty Toomes said he had about 32lb. I was really worried the lost carp were going to cost me today, but there's not much you can do about foulers in the winter. What I was really surprised at was that I had not had a single F1, but then neither had the anglers either side. As I packed up and other anglers passed me I realised the whole venue had fished mega hard and local super star Nev Groves was top weight on the canals with 46lb. I ended up being the last angler to be weighed in, and 70lb was winning with Nev in second. Gabriel Skarba was top weight on my lake with 44lb from the car park bank, and I never saw him catch a fish!!! My silvers went 6lb, and then my carp went 47lb and my 53lb was now second overall, yay! Mat had weighed 34lb and he got the section by default so we had a double pick up.

Reflecting on today I was really lucky to get that peg, and I would have struggled on the canals against the regulars. Half way through I was wishing I had taken a lead rod (due to the bad light) but actually the lead chuckers didn't catch and I believe the carp fed late that were sat in the upper layers which were slightly warmed up by the sun. I really enjoyed fishing the waggler, it was just like I did 20 years ago at Moorlands / Woodlands, light reel line and hook length, small hook and my old faithful Normark 13ft Titan. Happy Days. I didn't get the results and names, but I do know that Scott Puddy took the silvers money with about 8lb of roach.

Next week I'm guesting on the Viaduct w/l on Campbell lake, please get me a good draw Mike Nicholls! I reckon the week after I could be back at Hill View with a bit more prep this time!
Posted by Tim Ford at 20:01