Float Only League Round 5 - Sedges Fishery

There was no blog last week as I was on holiday in Ibiza, and what a cracking holiday it was, great weather, great food, great company and far too much booze. I managed to put on 5lbs in 10 days, sadly it has all gone on my gut, so I need to do something about that! Anyway, I didn't get home till gone 9pm Saturday night and a quick call to Glenn (who did me some meat) was the extent of my preparation for this penultimate round of the series.

Glenn did the honours driving which was a godsend as I was well and truly knackered. We stopped at Hill Tops where I had my 11th consecutive cooked breakfast, no more of them this week! We were well early arriving at the fishery, but even so we only just got a parking space, and took a walk around the two lakes which were being pegged. The wind was blowing straight down the lakes from the car park, and it was forecast to get very windy during the day. A corner draw at the bottom end where the wind was blowing into looked to be favourite, and peg 11 where Glenn won from Thursday was high on my wish list. I was quite a way back in the draw queue and saw peg 11 drawn out, bugger, but then I was lucky enough to draw corner peg 40 which is a flyer, even though it was the opposite windy end it was still fancied as a week or so ago 350lb came off this peg, albeit on a method feeder!

After my short walk to the peg I got on setting up as we were starting at 10:45 today. My neighbour today was Dave Roper on 39, behind me on peg 1 was Mike West. First thing set up was a 4 Swan pellet waggler with 0.18 to 16 PR38, this was for the long chuck to the island, see below. Oh by the way, this photo was taken about 30 mins AFTER the match ended and the wind dropped!!! 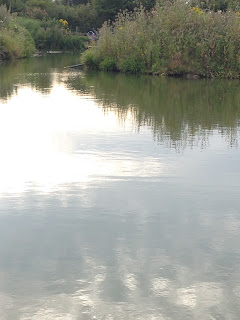 When the match started I fed half a pot of 6mm pellets at 14m, half a pot of 8mm pellets to the end bank. I started on the deep rig at 14m and all the while fed some 11m pellets all over the island as the wind was not nice. I missed a decent bite first drop in, then not long after had a very slow pull down on the float which moved off and looked like a liner, but the float never came up so I struck anyway. The culprit was a foul hooked 1lb 10oz eel! For the rest of the match I never caught another fish on this rig. I was catapulting 6mms over this line in the hope the carp would come in shallow, so I let that settle and had a quick look on the wag. It was not easy and Dave Roper had already given it up as a bad job, in 30 mins I had 2 bites, one of which resulted in a 2lb carp. I never had a another fish on the wag for the rest of the match.

It was not the start I was looking for or expecting, but I could see Anton Page opposite me on 21 not doing well either but had taken a couple shallow, so I went back to my 14m line with a 8mm in the band. A few fish were blowing but it was hard getting a bite, I think I managed 3 (one of which went 12lb) before it went quiet and I had an early look up the end bank which was biteless. Resting my other line worked and first chuck back out shallow I had a carp, sadly I never had another fish shallow for the rest of the match... Do you see a pattern forming lol? Not a lot was being caught and I was ahead of Dave who had 3 carp on paste.

I guess it was about 2 1/2 hours in that I went back to the end bank and this time the float went under, but after a fouler I soon realised the fish were up in the water, but with so much foliage fishing shallow would be hard. I did try it with no reward and so cupped in about 30 to 40 8mm pellets and stopped feeding with the catty in an attempt to try to pin the fish down. This worked a treat and I started to catch small 2-3lb carp fairly regularly by just potting, then toss potting in about 15 pellets. I probably took 6 in as many casts and was now getting regular indications. For the next 2 hours I caught slowly but steadily, mainly small carp, when it slowed I tried my meat line and had 2 fish quite quickly, but I never had another bite here!

The end bank line was now a struggle and I had to wait a long time for a bite, hard graft when you're fishing 16m. That said I was confident the fish would return and with 75 mins to go I got another keepnet, sadly I only managed to put 3 carp in the new net as the fish just went. I think I caught the resident fish that were probably happily living under the trees to my right, I fished as near to them as I could next to some reeds, you might be able to see the spot I fished in this picture. 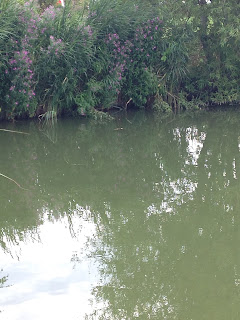 When the match ended I was feeling tired but happy as I had enjoyed the day despite knowing I was not going to frame, which I thought might have been possible mid match. I had to wait till last to be weighed in and it was plain to see that the other end of the lakes had been the place to be, in fact I think the top weight in my section was 29lb until weighed in, my nets went 88lb+ I think. To be honest I missed all the results due to being last to be weighed, so rather than the guess the winners and the weights I will have to refer to other blogs, Tony's, Mike Nicholls etc. I do know Glenn and myself won our sections. With one match to go I am in contention in the league, but, and it is a big but, I would need the front runners to have a bad result as I have a low weight compared to them. The reality is Trigger and Shaun Townsend will be fighting out for the top spot.
Posted by Tim Ford at 21:10