Preparation for this match was done Friday and a little bit of Saturday morning, the rest of Saturday was taken up with watching Bristol Rovers. Well, what a day that was gaining promotion to League one in the 92 minute, OMFG I said or something similar. I think I drank a fair bit of cider with friends and family till quite late, well quite a lot of cider actually and it was going to take a toll on me the following day, but it was worth it, what a day. 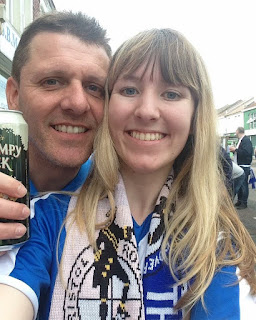 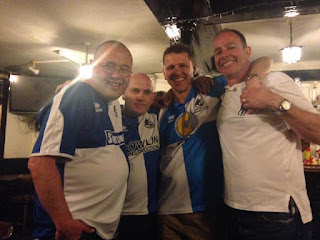 Getting up Sunday morning I won't pretend I was feeling OK, I was functioning but I was definitely hanging. I loaded the car and made my way to the fishery, about half way along the journey I realised I had left my phone at home. When I got to the fishery owner Steve Long kindly lent me his phone so I could phone home and let the wife know not to call me. I had managed to get a breakfast bap down me but must have looked worse for wear judging by the comments made. I was also fishing in my Rovers shirt so that got up a few City fans noses. I couldn't care less about where I drew but I did hang back to let all the Lodge pegs get drawn ha ha, I pulled peg 132 which is a corner on Campbell. I had to be happy with this as the wind was blowing into it, but then I remembered that pg 135 is in so that might make life a bit tricky.

Got to my car and started to unload my gear, I realised that I had left part of my Preston Shuttle at home, but no matter I improvised and got my gear to the peg. I was thinking lead, waggler, long pole in front, long pole to the end bank and meat at 5m.  Now to set up, OK now I knew the cider had really kicked in this morning, I'd left my reels at home. I walked up the bank looking to borrow one, in the end that very nice man Tony Rixon (who was on 109) lent me one. Back to my peg and managed to thread the line through the rod rings, then oh dear, I've left me wagglers at home too, and I should have known as there in the same bag as my reels. Team mate Nick Chedzoy on 131 lent me a couple of wagglers to help me out. A 4x10 carp PB3 was put up for the end bank for use with 8mm banded pellet. A 4x12 set up for the long pole and so was a slapper rig but it saw no action. Lastly a rig for the meat which was a Corby job, with 0.17 to 14 PR38.

I fed some pellets to start and by the time I got my rig in the water Calum Craig on 132 had lost 2 and landed one carp, this was shape of things to come. On the long pole with 6mm pellet it was slow with just a tench and small carp in 40 minutes. I went to the end bank early and did have a tench and a small 2lb carp and nothing more, so an hour in and not good at all. Calum was bagging but Chedz was struggling same as me, other side of Chedz was fellow Gashead Shaun Townsend and he started well. I had a look on the waggler casting to the pallet on peg 133, I had 1 carp here but no other bites. The long pole was tried again but this was a dead duck and it seemed as if the carp were all over by Craig. I decided to give the waggler a go in open water as I could see the carp out there. I thought I had hit on the method as I had 3 decent carp quite quickly, but then they seemed to drift off back to their mates in 135.

Halfway through I had a few more carp from the end bank but it was a false dawn as they soon disappeared. I came in on my 5m line with meat and had a couple of tench, and then a carp, that was it and time to try another line. That was how my day went, and I got the feeling there weren't lots of carp there, I basically caught more fish on my meat line than anywhere else, and the last two hours were quite steady fishing. Chedz caught well the last 2 hours, but Shaun had a bad last 2 hours. Calum just caught all day and weighed 256lb.  My fish went 130lb which included nearly 20lb of tench. Chedz had 144lb which was less fish than me but he had some big carp, then Shaun had 143lb 12oz.  Chedz said before the weigh in he had 40lb less than Shaun errrr lol! I basically came no where, think I beat 1 or 2 in my section so that's the league over. I reckon I could have beaten Chedz had I been sober!

Full results on others blogs, I am too tired to write anymore sorry, night night. UTG
Posted by Tim Ford at 21:27