Some months back I was asked to join a Rovers team for a match a Duchess Pond, sadly I could not get time off work to make that match (which the City won) and so when the request came again for a match at Shiplate I was happy to oblige. There had been another match but that was a carpers 48 hour affair which the Gas won, meaning today's match would see one of the teams go into the lead. I was joined by Glenn Bailey who picked me up in a van so we had room for all our kit, sadly the van is not his so it was a one off, but we could do with one between us! We had a breakfast at Shipham with fellow Gasheads Mark Tanner and Shaun Townsend, it was the first time I'd had a brekky here since it changed ownership, it took a very long time to arrive (only 2 other people in mind) and whilst it was nice it wasn't a patch on the old one sadly.

Arriving at the fishery the first person I saw who I knew was City fan Pete Sivell, he didn't believe we were fishing for the Gas and said well that's it then you lot have won. Well we would see, Shiplate can be a peggy place as I recall.... The draw was done a bit random, so rather than one city one gas it was all over the place, and they wanted volunteers to fish the Westpool. Most of our team wanted to go on the main lake it seemed so I went on West pool as did Tony Rixon for the Gas and a few others. City had Ben Franklin and Pete Sivell + others on Westpool. I drew peg 7 which is in the wide bit of Westpool and it was over 16m to the far bank. Tony drew next to Pete down on pegs towards the bottom which was I was told the favoured area, we would see. Oh and Glenn did what Glenn does, drew a flyer, peg 1 on the main lake lol.

You can see the view from my platform, the little cut back to the left was too far away and I fished to the right of the picture. 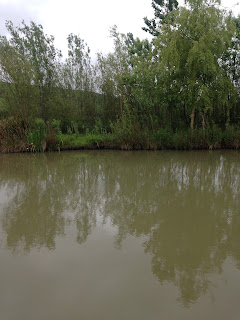 Got to my peg to find a City fan to my right on peg 5, and Gas captain Rod Poole on peg 8. I set up the 16m of my pole and stuck a rig on set at 18" deep, across it was not really flat and the depth went to a few inches, and so fishing with 16m was going to get me into about 14" of water. On the inside the margins were as bad as I remembered, about 5 inches then steeply shelving off to 3 ft. Rigs were a 4x10 Durafloat 10 for across, a 4x12 for the 3ft 6m to my right, a 0.3 inter 4 for 11m, and a 4x12 Carpa job for meat at top set + one.  I used 0,16 to 16 PR36 on everything. Fellow Gashead Mark Tanner was doing his best to scare the carp from our far bank wearing the brightest T-Shirt he had, it was like having a yellow blimp opposite us. 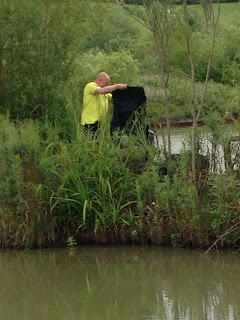 When the match started I fed 4mm pellet and started at 11m as in the past I have had a few skimmers and carp on this line, all the while feeding 6mm to the far bank. It was a very slow start with one 6oz skimmer and one lost fouler after 40 mins. With odd carp on the far bank showing themselves I went across and quite quickly had two small carp and lost a fouler. Then it got tricky and although fish were still there I wasn't getting any proper bites, also grasses and roots under the water were a real pain. After an hour and a quarter I got off my box and went round to the far bank to trim the grass and removed a fair bit of Willow root. Of course this put the fish off for a while but I hoped they'd come back. I tried the 11m line and the meat line and margin but all were dead, so had to go across. I landed a 4lb fish hooked fairly in the tail, and another of similar size in the mouth. However, with the wind getting up it was hard to fish 16m and with so few bites I was feeling it.

After a while I took a walk down the lake, Mike Stiff had 4 carp, Pete said he had 4 and Tony 6 or 7, everyone was having a tough time of it. The rain then came down and it stayed with us all day long, and it was heavy at times, but the wind dropped and so I went back to 16m and I picked up a couple more carp but it was rock hard until with 1 hour and 45 mins to go I dropped back in on the meat line. After a bit of a weight the float went and I had a 1lb + skimmer, then another next chuck, then a wait and then one of 2lb. This was better than fishing across, and so I stuck with it and then had a carp of 3lb. All of a sudden there were a few fish moving and carp were coming into the shallow margin but were impossible to catch. I stuck it out on the meat line till the end of the match catching another skimmer and 6 more carp I think, it was my best spell of the match.

Packing up in the pouring rain and waiting for the scales I was happy enough I'd done a job for the Gas, I had 44lb on my clicker and so estimated with the silvers I had 50lb. For once I was accurate and I had 44lb of carp and 6lb 9oz of silvers for 50lb 9oz. I was beaten on the West Pool by Tony who had 65lb and Pete who had 51lb 7oz.

The final result was a resounding win for the Gas with a total of 395lb to the City's 175lb. The top 6 was something like this :-

Well done to all and well done for raising money for charity. UTG.