There was no hangover today, although a couple of ciders did go down nicely Saturday in the sun I was always going to be sensible this weekend. On Saturday the wife and I visited some National Trust properties and on the way home popped in the Station pub in Hallatrow where we met up with Warren Bates and his wife. We had a good chat and discovered we were both going to Windmill Sunday lol.

It was a longer journey than normal as the ring was closed all weekend for resurfacing, but at least I remembered that it was closed. I got to the fishery about 10 minutes before the 9am draw and there seemed to be a few anglers assembled. Paid my £17 pools and had a chat with a few of the anglers briefly before the draw started. Peg 26 was the golden peg today but that went to silvers specialist John Barker and so it wasn't going to be won. I pulled out peg 22 which I thought I recalled, and yes it was the peg I had on my last visit here. Although I did pants that day I felt it was a good peg, and Shaun Townsend had won off it a month ago. With the water being warmer and wind lighter I expected to be able to fish it across to the island in the shallow water.

I walked to the peg and on peg 23 was Warren Bates, what a coincidence sat by him two days on the trot lol! I was able to see how the grasses and reeds had started to shoot up, and in the margins the silvers were spawning and owner Terry advised they had been doing so all week. Looking at my peg I thought fishing two lines left and right across would be a good idea, but that the right side should be the banker. If you look at the picture my right hand spot was in the middle of this pic, and I couldn't reach the island with 16m here, but to my left I could. 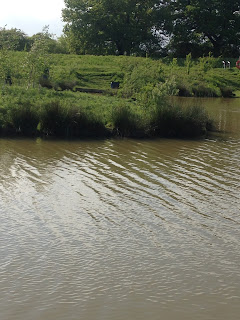 I had no intention of fishing right against the island to my right as it was to shallow for my liking but about 1mtr off the bank I had about 16" of depth and this would do nicely. I fished a 4x10 Durafloat with just 1 no10 down the line and a 16 PR36 to 0.16 for fishing hard pellet. I did set up a long line dibber rig for swinging in but it was never used. Two other rigs a 4x12 for meat on my top set just over the reeds and a 4x18 for meat at 6m. I was set up ready for the 10:15 start and with my neighbour on peg 21 being Dave Wilmott I was hoping he wouldn't be doing any magic today. On the all in I fed a few 6mm pellets in a pot on my two far lines and threw a bit of meat next to the reeds. I put an 8mm pellet in the band and shipped out to my right line feeding a few 6mm's with the catty. It was only a couple of minutes at most before I had my first carp in the net. I shipped back out fed some more pellets, lifted and dropped and was in again. After landing my second carp I fed with the catty straight away, then shipped out, fed again and was in again!  Wow this was a good start, surely it couldn't last?

After the first hour I had 30lb on my clicker, things were going well in fact I had 7 carp before losing one off the hook. The 2nd hour was a bit slower but I had a double figure carp which gave me 55lb after 2 hours. At this point the far side went downhill rapidly, with no areas becoming a real struggle to get any indication. My neighbours had struggled from the start and as far as I could see I Was doing well. Resting the far side I tried my inside line and had 5lb carp after waiting for about 10 minutes, sadly this was the only fish from the margin all day long. Going back across it was dead and the next 2 hours were a massive struggle for me and I had 2 skimmers which were like sand paper. It seemed most anglers were finding it difficult except for Paul Elms on 28 who was bagging carp shallow.

With about two hours to go I found I could get the odd carp again if I tried slapping the rig, but doing this at 16m with a wind which had turned around 180 degrees was hard graft. The thing was I just could not get a bite or indication from any of my short lines and so I spent most of the match fishing long and dropping the rig in here and there looking for any signs of a carp. I did manage a carp right at the end so it was nice to end like that, I was well and truly knackered with a nice shiny elbow where skin used to be.

Terry weighed from a few pegs above me and there wasn't much caught carp wise, Warren had 34lb next to me then I had a total of 96lb 14oz which included 4lb 8oz of scabby skimmers! Dave DNW and then there wasn't a lot until Dave Haines on the corner peg 16 had 35lb. Then opposite me on peg 7 and 6 Towner and Mat Tainton both had 50lb+ .

Paul Elmes was last to weigh and he did the business winning with 133lb 6oz, well done that man. I was second with 96lb 14oz and so got a pick up at long last. Towner was 3rd with 52lb and Mat Tainton 4th with 50lb.

The silvers was won by John Barker with a nice 24lb of roach, and he was closely followed by Steve Dawson who had 22lb. There were very few skimmers caught and I think they were recovering from shagging.

Next week I am fishing on Saturday at Shiplate for a Rovers versus City match, I am sure you know who I'll be fishing for. UTG
Posted by Tim Ford at 19:57