There was no blog last weekend as I spent a few days away with the wife in Guernsey and what a lovely place it is. We also spent a day on Herm Island which was very peaceful and I saw some great bird life there including Peregrine and Marsh Harrier. Lovely scenery. 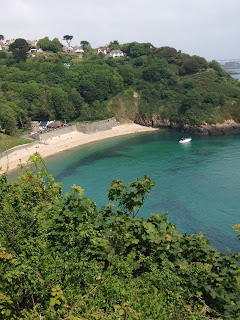 Back to today and I was travelling on my own as Glenn had suffered sickness and the shits on Saturday, he owes me £20 as I had to pay his pools so bad weekend for him all round! My journey to the venue was uneventful and I arrived in good time and got into the draw queue with only a few anglers before me. I managed to pull peg 129 on Campbell which is on the carp park side of the little spit, A nice peg but in a section that has some nice pegs, and it also had some very tidy anglers on it! Peg 128 was the start of my section and team mate Nick Ewers was on there, Matty Toomes was on 130, Craig Edmunds 131, Ben Haag 132 and Mark Wynne peg 135.

First job was to cover myself in sun tan lotion, although it was overcast to start it was forecasted to be hot and sunny. After talking to Bob Gullick who had been on my peg a couple of weeks ago I formed a plan. A 4x10 durafloat with 0.17 to 16 PR38 for fishing 8mm pellet to the spit. A 4x10 PB Carp 4 for fishing meat at 5m and 13m with 0.17 to 14 PR456, also a dobbing rig. Also set up a lead rod.

The aerator was on all day and it made it difficult to have any form of conversation, I could talk to Matty but beyond that no chance, plus Nick Ewers didn't catch on the lead today so he had no hands free to use his ear trumpet. I started the match by cupping in about 20 pieces of 8mm meat at 13m and fishing straight over it, Matty did the same it appeared, and he was rewarded with a large carp first drop, I fouled one. Mat then had another barney rubble whilst my 8mm meat was whittled away by bits. After 45 mins Mat had getting on for 40lb I reckon, I had 1 carp and a skimmer and had lost another fouler. It was tough going for me with no indications and so I picked up the lead rod and cast it to where I had been feeding some 8mm pellets. I didn't have to wait too long for a wrap round but it was only a 2lb carp. A couple of chucks later and another carp was netted but that was that for the lead.

A couple more carp and a tench came on the long meat line but I was not making any in roads into Mat's lead and Trig also had more. After 2 hours an early look on the spit was a complete waste as there were no fish there. My 5m meat line was full of fish, but they were not that big and would whittle away at the meat until they could nick it off the hook. The middle of the match was even tougher for me and Mat had struggled after losing a fish that took his rig and elastic. I tried a bit of slapping with a pellet but never had a touch.  Trig started to come to the fore catching on meat and some dobbing, his peg just got better as the match went on. I thought the spit might come to my rescue and get me up the section, but it never happened and all I got from it all match was 1 skimmer (Nicky never caught on it on the other side). Finally I had some reasonable action in the last 75 mins catching on my 5m line, I had some carp and tench but my fish were never big enough to trouble the lumps that Mat had. When the match finished we were all very and bothered after sitting in the sun all day, but also being in the shadow of Trig. He paralysed the section with 223lb, I never thought he had that much, I think Mark Wynne would have been second in section but he hadn't weighed when I left. Matty had 114lb and I had 93lb which included very nearly 20lb of silvers. Nick Ewers gave me 2 points as he took last in section with 83lb, as we said it's not a bad day when you catch that many fish, but you need well over a ton to compete.

I didn't hang about as a cold beer was in the fridge waiting for me, so I don't have the full result but it seems that Gary O' Shea won with 240lb from Carey 85, Dan White had 227lb from 81 (though he lost 88lb due to going over in a net, ouch!) and Trig came third.

Well it is fair to say I am well off the pace in this league, I used to be able to hold my own at Viaduct but I can see I am a way off these carp anglers. That said I still enjoy fishing the venue and trying to work out what is going on. Will be off to Viaduct for a week next weekend, fishing various venues as well as two matches on Viaduct. The blogs won't be done to the week after though.
Posted by Tim Ford at 21:33