Steve Long had kindly shut Lodge lake for us on Monday and the six of us, plus three lads from the other lodge and Colin Dyer made it a 10 peg knock up. That meant plenty of space for all and with us fishing from midday to 6pm I thought there could be some good late margin munter fishing. It was absolutely hammering down with rain to begin the day, but we soon found out it was also very warm, almost tropical weather. As draw time approached I looked at the pegs and with only 53 and 56 on the car park bank I thought I should finally get to see another view of the lake. OK maybe not, I pulled out peg 53. I was not complaining though as this peg as had some form lately in the spring league. Steve's advice was that I should catch late down the left hand margin, and whatever I hooked keep it well away from the two posts opposite as that would be goodbye fish.  My neighbours today were Mike Nicholls on peg 73 and Woody on 56. 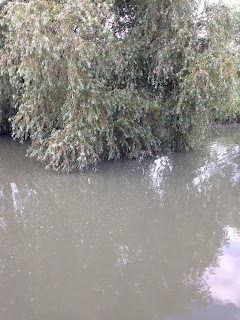 The long margin line was going to be fed with groundbait down under the branches where the pole would not be seen by the carp. 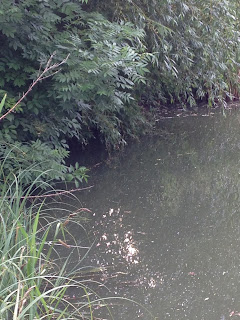 I started the match on 14.5m line with meat, a 4x12 rig with a 12 PR478 to 0.18, but after 30 mins on here all I had were nibblers, as I had been feeding it lightly I dumped a pot in and went to the front of the willow with the same rig where I had been throwing meat in. To begin it was more nibblers and little roach, but then I had a couple of decent skimmers but it was slow. An hour gone and Woody has 4 carp and Mike has 4 and I'm already being battered, hmmm.

Feeding the big pot of meat at 14.5m stopped the nibblers but also stopped everything, and I never had another bite on this line. The odd bubble was coming up in front of the willow and I had a little tench and a couple of nice hybrids. No sign of the carp here, but they were easy to spot as they were coming up by the posts all day, but I had decided to not fish over there and lose loads and hoped they would venture out soon. After a couple of hours both Mike and Woody's swim had gone very quiet and it seemed the lake had switched off for all. I plugged away and then had what I thought was a fouled carp, but it turned out to be an eel of over 2lb. After many attempts I got it into the landing net, much to Mike's amusement, and I was laughing my head off too.

Three hours into the match and with no carp in the net I fed gbait down the margin, and I opened up a new line at 14.5m in line with the left hand post, where I fed 6mm pellet. Fishing here I had a tench, lost a carp, and after a couple of small skimmers I finally landed a carp, yay I was only 60lb behind Mike now lol! I did lose another carp on this line but this also went right off. Finally with about 2 hours to go, and after regular feeding of gbait, carp were in the margin. I shipped out with a 4x10 Durafloat 10 and with 8mm meat on the hook. There were fish there but it was hybrids and not carp, but I stuck with it as I was sure carp were nearby. It took a while to nail one, worth the wait though as it was a 10lb fish. I fed a ball of gbait again, then went in with double meat and after about 15 mins I was hanging on to another large carp. Basically this is where I stayed for the remainder of the match and as the match went on the fishing got better for me as the carp decided to feed with a number of large carp and just a few foulers lost. I fed about 1 kilo of gbait today, so had a kilo left which I kept for the rest of the hols.

Mike opposite had caught some very large carp late and I thought he had more than me as I had been so far behind after 4 hours. Woody was the first to be weighed and he had (going from memory!) 109lb. Glenn on 59 then had 111lb. Gordon on 68 had 107lb (including the top weight of silvers of 25lb).  On 73 Mike had 117lb and I had him down as the winner, but my silvers went 18lb and my carp 105lb so I took the win with 123lb. As you can see it was a close match and 1 fish could have made all the difference.

Out in Somerton that night and it was my turn to buy the "winners" beers, and we had a great meal in the Unicorn Hotel, I think this was the night Geoff had a monster mixed grill, it beat him in the end.