For those that don't know my job is a sales manager and as such I spend most of my week sat in a chair, but I have always liked to be active so walking, football and long walks on the river are my way of keeping fit. I took Friday off to trim a couple of trees down, but I only managed to "severely" trim one tree as a) it pissed down and b) I was knackered. Sat morning I cut up all the branches and made 4 trips to the dump, I mean recycling center, and was knackered again. All this and then I had to get all my kit ready for a match on the river, and mix up a load of gbait. A party till midnight that night was good fun, but I could help notice a few aches when I woke at 6:30 Sunday morning...

Driving over the river at Keynsham I could see the heavy rain from storms had coloured the river right up, this was now going to be a bream match. Got to the rugby club and had a warm welcome from the bar staff, and saw that we had 44 people fishing today a good turnout. Looking at the pegging I fancied most pegs up at Swineford, and the Ashtip fields at the Crane for bream. Didn't really want to be a Jacky Whites today. Needless to say after a couple of bacon rolls and a cuppa I drew in the shallows at Jack Whites, balls.

Had a nice easy walk to the river and Dean Harvey found a little bit of flattened grass where we could lift our trolleys over barbed wire, this is easier than those damn kissing gates. Got to my peg and was gutted to find I was on a newly cut out peg opposite a lovely willow, always wanted to draw here as you can see chub in the willow when the river is clear, I couldn't see them feeding today. 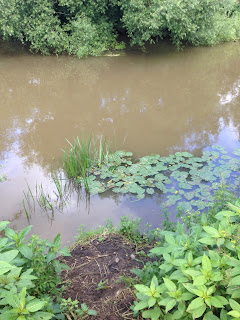 When I got down into the peg the water was deeper than what I thought  and I couldn't get near enough to clear the reeds or lillies. I asked if I could move to the peg above which had been left out and nobody objected. It was much steeper to get into this peg but shallower in close and I could clear some reeds and as you can see it was much better to fish. 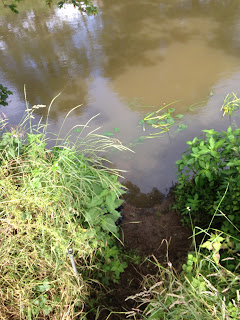 Mike Withey was the peg above me and he had gone back to his car for his waders, he then faced the same issue I had and he moved to the peg in the field below the lock gates. My section was completed by Jamie Cox on the style, Shaun Bryan on the steps, and Kev Dicks on the cow drink. I couldn't see me troubling the frame today as I have never seen a bream caught from here, so I set up a 3BB wire stemmed stick float to fish in the 5ft of pacey coloured water with a 16 B611 to 0.13. I also set up a feeder rod just in case I wanted to chuck to the willow.

I fished old style, stood up in the water with my box holding all my bait, keepnet etc, and fished rod and line, I fed little balls of gbait with hemp and caster in and also loosefed some maggot and hemp. 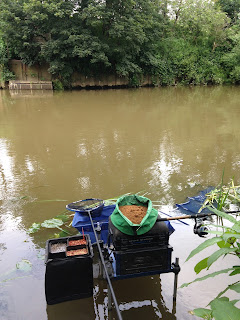 The start of the match was very slow and I took a while messing around with the shotting and the depth to try to find the best way to present the bait. I fished for a while with an over shotted float over depth and literally back winding the float down the peg. The fish I caught were small, an ounce at best and I wasn't really surprised by this. After a while I fished the rig more conventionally and started to catch a little bit more regularly running through at pace and holding back here and there. I was still catching mainly little dace, odd bleak and had a few roach, all small fish. Double maggot was tried, caster, but whilst these got odd bites the quality did not improve and single maggot was as good as anything else.

About halfway through a narrow boat came along pulling another bigger boat, it was only just moving against the flow, and for a good 15 minutes I really couldn't fish the peg due to the disturbance. However, once this settled down I started to catch a better size of dace and even had a couple of 4oz roach. I had a decent hour and then with about 80 mins to go the wheels came off and the peg just died. I was also having terrible problems with my line which was kinking and twisting up terrible, and in the end I had to bite off a load of line and start again. Sadly all I could now get was the odd bleak. I gave the feeder a go right over by the willow and ploughed a fair bit of bait into there, but my only result was a roach. The match had gone pretty much how I thought it would, not enough to do any damage but it was great to get the old stick float out, and I got to use my microlite 2000 rod for the first time which I bought a while back off Tom Bailey.

I helped with the weigh in and the bottom section in the deeper water was won by Dean Harvey with 16lb which was mainly 4 bream, good lad. Kev Dicks had 7lb, I had 8lb 6oz, Shaun 8lb 3oz, Jamie 5lb and then Mike had 12lb to take the section.

As expected the other parts of the river threw up bream, with the top 2 anglers in the long ash tip having 44lb and 33lb of bream. Steve Priddle had 25lb of slabs from just above the cattle grid and the top weight up at Swineford was Nathaniel Johnson who had 20lb from about old peg 7, he had 3 big bream and some bits, he sent me this pic as he said he has been desperate to get on my blog ;-) 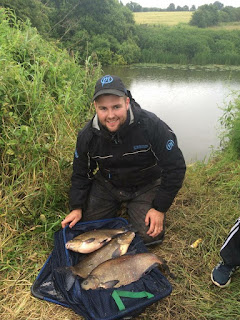 Superleague next week and we will have 2 sections in at Frys as well, fingers crossed for right peg for the right conditions. Though I would love to draw my peg today in the winter leagues.
Posted by Tim Ford at 21:08