We were a little slow getting going Wednesday morning, all except for Mike who gets off to bed early and rises at 6am, proper OAP him. The cheese and brandy cocktail was being blamed for a few things including someone who had at least 5 trips to the toilet.... Glenn lol. We had booked breakfast at the Savanna cafe in town for 8:30, and it does set us up nicely for the day.

I was really hoping for a draw on the bank next to Carey as I feel on these short pole matches a decent margin feature is a big bonus. With 20 booked in it was sold out and there were some good venue experts fishing so it would be interesting to see how it fished. Scott Russell pulled out 125 and that was one area I wanted to avoid, and then Gabriel Skarba next to me in the queue pulled two tickets stuck together, he offered me one but I declined. Gabe got 130 which was another I wouldn't have wanted, my turn and I got two tickets but kept the one in my grasp, it said 112 result!!! That was a good un and I couldn't be happier as it has a lovely margin with peg 113 not being used.

I got to the peg and it was nice and sunny so not wishing to get any more red bits I applied factor 30. I had been told that most of the carp were down at this end of the lake and the anglers down here were Emma Drysdale on 135, Woody on 110, Paul Blake on 111, opposite Trig was on 132 and I guessed he have another huge weight today. On my right on 114 was Steve Rolfe.

On this match you can only use your top set plus 3 sections, that is it, and no other sections can be added if you hook a fish, simples. I was sure I was going to catch most of my fish in the margin which is behind where you sit, so I placed my box at angle to make it easier to fish there. Rigs today were one for meat at full length which only caught me one carp, a 0.15 Corby with 0.16 to 16 PR36 for fishing hard pellet at full length at 2 o'clock. Lastly a margin rig which was going on my Beastmaster pole, this was the 4x10 durafloat 10 again, with 0.18 to 12 PR478. This was to be used in two places where I found a similar depth, at full length back into the bay just short of a bit of bramble going into the water, here I fed meat. 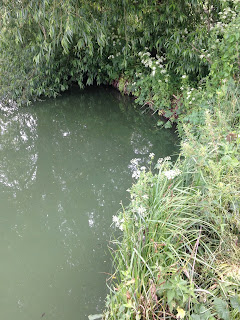 The other spot was on my top set where I had to do a bit of gardening to get in close, and in the process I scratched my arms to pieces, ouch. Here I was going to feed groundbait, this was the mix I had left from Monday with another 1 kilo added, this was rancid now as I had left in the car and not in the lodge fridge.

On the whistle I fed a small amount of 6mm pellets in front, some meat in front and a big pot of meat in the far margin. I began on the pellet and was expecting a swift response, but I was disappointed as the float sat there and no bubbles or fish were in evidence. Meanwhile Glenn was off to a flyer on peg 128 catching from first drop in on the paste, on 127 Mike was losing carp from the start as he was going for silvers, but it seemed quiet for most. A couple of small skimmers and a fouled carp landed came on the pellet, over on the meat it was just one foul hooked carp landed and no other indications. Back on the pellet and a tench and a proper hooked carp but it was all far too slow and after an hour Paul Blake was battering me on his meat tactics and Glenn was still doing OK. I knew after the last two days where I had only caught for the last 2 hours that I was going to have to start catching soon today otherwise I would have no chance of framing.

After an hour of glorious sun it began to thunder and then came heavy rain, this lasted for the whole match and did not let up one bit! It was a struggle to keep the bait and gbait dry.  I guess it was not much longer than 90 minutes when I decided to go down the margin over the meat line, where I had been throwing odd pieces of meat to. It was a good decision as the float wasn't settled long before it went under so fast the elastic came out before I struck. Having the beastmaster meant I could really pull hard on the fish and it came out before it could reach any nasty snags. I caught well here for the next hour and felt I was clawing back some of the deficit on Paul, but not on Glenn. Trig was also catching well on 132 as he does. The meat line then faded and all signs of carp went, at the same stage Steve Rolfe on 114 started to catch in his margin and did so for a while when I had to give it a rest. I started feeding groundbait on the top set line and kept my eye out for signs of carp. 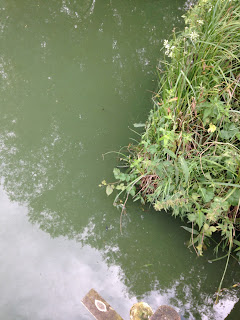 I went back out in front and caught 3 carp on the pellet in quite quick time, but lost a few foulers too. This was then iffy, so I had to speed up and I was pleased to see my groundbait swirling around as a carp rooted around beneath the surface. I had a run of fish here and put a lot of fish in the net in a short time, on some occasions a bite came instantly. It was lovely fishing and at times I could see a carp tail and I would drop the rig in somewhere near where I thought its head was, sometimes I got it right and I hooked the fish and was able to watch it turn and swim off. I kept feeding the gbait and if I saw no signs of a fish I tried the meat margin line, it didn't produce many but they were handy fish. In the last 20 mins I stayed on the gbait line fishing double 8mm meat, carp were always in the swim. I hooked one with 3 minutes to go and I thought just get this out don't rush, as I played it I said to Mike when is the all out, he replied with something but I cold not hear him. Anyway I landed the fish, dropped the rig back in and it went under straight away and as the elastic poured out Mike shouted all out, I shouted fish on. Got that one out and it was a great feeling to do that, not that I thought it would make any difference. I was convinced Glenn had won, with Trig second, Paul next to me didn't have anywhere near as many carp as me but they looked bigger than my fish, but we often think that. When I got off my box I felt water running down the backs of my legs, I was soaked through to my underpants.

The scales started at Trig, and after a while he shouted across he had 170lb, I'd clicked around 180lb, but usually over estimate the fish so I wasn't convinced I had Trigs weight.  Glenn went into the lead with 229lb 15oz, all on the paste over three lines, it was a pleasure to watch. When my weigh in was done the weight was shouted out at 173lb 8oz. Trig then should across what did I weight, I told him 170, not knowing what he really had, he then said 173, same as me. Eventually he went to check what he had weighed and after a bit of banter he had weighed 5oz less than me. Well it is a very rare day when I catch more than Trig, so I was happy with that. After all this banter I forgot about Paul, it turned out he had 166lb 5oz, just one fish short of my weight, and he lost a double at the net he said.

A good win for Glenn, and I was really on cloud nine after enjoying catching close in and coming 2nd and getting my third pick up on the trot. We then dragged our soaked gear and clothes back to the lodge and wondered how any of it might dry out for tomorrow. Of course Glenn and I had to buy the beers this time, but not until we had a nice curry at Somerton's and one and only curry restaurant. As you can see there were a lot of nets used today. 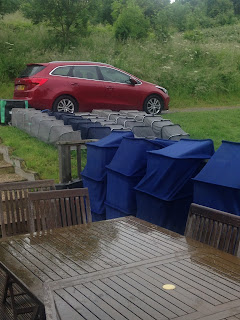