Sunday was effectively the first start of my annual fishing holiday staying in one of the lodges at Viaduct. Mike Nicholls, Glenn Bailey, Martyn Woodington, Gordon Cannings and Geoff Francis and I were looking forward to having plenty of good fishing, cider, food and weather, well we would see.

I got up early Sunday to pack the car, it was full to the brim as I had to take enough bait for 5 matches as well as clothes, booze, etc. I got to Landsend in good time, Gordon and Mike were already there but the other three holiday makers were fishing at Summerhayes. I'm not fishing the league due to clashes of dates but was standing in for Steve Skelton. I really fancied a draw on the favoured end of Speci lake, but that was not to be as I drew on lake 3 again, peg 70 again! No complaints from me as it is a good peg, but I have never got it sorted, I decided to try to go down the F1 route and get in on the silvers money if possible.

When I got to the lake and sat on my peg I couldn't believe it as Paul Faires on 42 and Matty Toomes on 41 were also on those pegs last time I was on the lake! As I began to get set up the banter started with the Scouser on peg 68 Dave having me in stitches at times. I went with light rigs for the F1's  either 4x10 or 4x12 for fishing on the bottom at 6m towards my left, and 13m straight across to the spit, these were for banded pellet and I used an 18 PR36 with 0.13 line. Also set up a shallow rig for slapping which can be a good way to catch the F1's and a margin rig with a size 12 PR478 to 0.18 to fish to my right with meat. I began the match feeding 4mm pellet in small amounts at 6m but just a few small roach and a skimmer after 30 mins meant I left that line but kept feeding it by hand all day with 6mm pellet. Going across to the spit I took 3 F1's in 3 drops and thought I'd cracked it, but then I hooked a carp, which was fouled and came off. Back out and I hooked another carp which in about a second got to the end bank and snapped me up. This line went iffy after this and I couldn't get anything, so I went on the shallow rig to the end of the spit as I had been feeding 6mm pellet by catty here. A good move as a couple of F1's obliged before all was dead again. I went on the deep rig here and had an F1, but then hooked a carp which found the end bank again. Using a 11 hollo was right for the F1's but not for the carp. I changed elastic and then took a couple of carp but it seemed the F1's had gone.

Everything went quiet and I couldn't get a bite, meanwhile Dave next door had taken plenty of carp in close from the start and looked like winning the section as it was fishing hard by all accounts. I then noticed a boil in margin line, and dropped in with a 10mm cube of meat, the float danced around a bit before finally flying under, a carp of about 4lb was netted. I fed again and went back in and then lost one, fouled I think. I had to wait then for another fish to show, and when I hooked this it steamed off to the weedbed and I could feel the line snagging against it, I hung on as the top set and no 4 section bent alarmingly. Thankfully the fish came out and I managed to get a 12lb carp in the net. About 15mins later another boil and I went back in and hooked another large carp which went under the weedbed and seemed to be pulling harder than the last fish, in response I pulled harder..... CRACK!!!! The no4 section snapped where my hand was and before I could grab it it completely snapped off and shot off into the lake never to be seen again, balls. I have spare no4 sections but losing the top set was a blow. I decided to run back to the car and get my Shimano Beastmaster pole which was fitted with yellow 17 hollo.

At this point the sun came out and it seemed to knock the margin on the head for me and most people, and I only took one more fish from here. Thankfully I managed to get in amongst the carp as the 6m line came to life, but I had to be quick after hooking the fish as these little 3lb carp are lightening quick and try to get in the snags, I did lose a couple but it was an enjoyable spell.

With the match finished I had about 58lb of carp and 14lb of silvers, Dave was going to beat me and he weighed just over 100lb, to my 72lb. That meant I was second in the section and no coin as default wasn't possible as Dave didn't frame as Speci threw up some big weights topped by Craig Edmunds 298lb on peg 34. After the match I was lucky to find Nicky Ewers in my section, he has the same pole as me and he leant me two top sets so I had some spares for the weeks holiday, thanks very much for that Nick, top man.

Nice drive down to Viaduct, a nice meal and some cider with the lads and Woody bought a round as he had framed at Summerhayes. The lodge is really something very special inside and out. 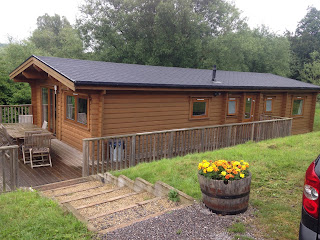