I'm never sure these days how the river will fish, you look at it, and if you see colour and pace you think well that's going to be brilliant! However, over the years I've lost count of the number of times the river fishes differently to how I think it will...

Sunday morning up and feeling good, get to the rugby club for a breakfast (which is much improved) and had a good catch up with the team before Lee Trivett was asked to do the team draw. I'm not sure if Lee had the last peg in the hat, but what he came back with was pretty good and no complaints. I was as ever hoping to be at Swineford as it always throws up some weights, but it was not to be this time as I was at the Crane, I still maintain the river is not at its best until August onwards, but it is the same for everyone so just got to work it out. I was actually on the cattle grid peg on the Crane, which was the end peg of the Crane, so had to be a big help today, but I would much prefer to draw this peg in the autumn when the bigger roach are on the feed. Still it was the shortest walk today and that was a nice bonus lol! This peg has no real features, and the flow is better the further across you go. 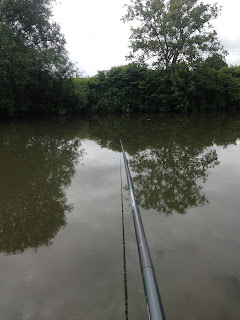 Setting up I was thinking that a bag of small fish was going to win this section, with bream being an outside chance as I doubted anglers would go for them in this section. I set up twp pole rigs for 13m a 1.5g PB silvers and a 4g both with 20 to 0.10, I was into the flow here at this length. I didn't set up lighter rigs for this as I felt bleak would be a problem. A 4m to hand rig for bleak was set up, a crowquill and a gbait feeder with 13 B711 to 0.16.

I had some good anglers in my section today, Clive Roberts and Ian Sheppard were above me to mention just two, so I had to have a good match to do well. When the all in was called I cast out 8 big feeders of bait to the far bank, then threw in 12 balls of gbait containing hemp and caster at 13m. I picked up the 1.5g rig put 1 bronze maggot on the hook and shipped out. The first few runs through were biteless but then I had a small dace, and then a tiny roach and then a bleak on the drop. Very soon the bleak were holding the float up and I was pushing the olivette down the line near to the hook. After an hour I might have had 1lb 8oz at best, but the bleak were pissing me off and I went out with the 4g rig. This changed things and bites were positive and I was catching little dace and roach much faster, but then a double figure pike turned up and after a few "sighters" he hit the target and my rig ended up in the tree minus a hook length and a few shot.

I went out on the 1.5 rig and had a few more little uns but the pike had unsettled the fish, time to rest it and chuck the feeder. Twenty minutes on the feeder was poor with just a 2oz chublet, and I never tried it again. Back on the pole and I was loose feeding hemp at 13m (nothing else as bleak would have it) and the rest seemed to have done some good. I had a good run of fish on maggot right over the gbait, after a while they went and then I had to go right down the peg to get bites. I was also fishing a few inches off bottom, but bites would come on the drop from the little dace. It was important today to drop the rig in and let it get to the bottom as soon as possible to avoid tiny bleak and dace. I didn't realise at the time but Darren Gillman walked up and took a snap shot of me doing this. 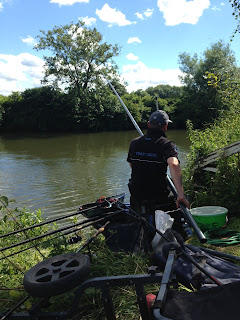 During the rest of the match I plugged away on the pole, I did feed maggot at 6m and tried fishing here for bleak and dace shallow / perch deep, but the fish wouldn't settle this close in and it was not worth fishing. I tried the crowquill a few times but the wind was too strong upstream to make it work. I did catch a few fish on hemp today but in all honesty they were the same size as those I caught on maggot, but in the last 30 minutes the fish would only take hemp and endured a frustrating time missing bites from dace and caught a couple of small roach late on maggot again.

Darren was behind me for the last 10 mins of the match and he reckoned 7lb was top weight in my section, so I pulled my net out to have a look and we both reckoned I had 10lb+
Being the end peg I was last to be weighed in, and when the scales got near Steve Nadin was top with 7lb 7oz. Clive Roberts had 6lb 13oz above me, and I plonked 11lb 13oz to win the section and take the £70 prize that goes with it. I think today my local knowledge and own thoughts on how my section would fish helped tremendously, sticking to maggot on the hook and catching everything, but trying to avoid pesky bleak, to put a bag of small fish together worked, I did think there would be more double figure weights in my section, but it seems as usual the better roach won't feed on our baits until another month or so.

Diawa Gordon League won the day with 50 points, Thatchers 49  and Garbolino BMV were 3rd with 48, so it was tight at the top today!

Another nice day on the river, lots of bites, very small fish, but it is great seeing the moving float going under. Hopefully I am saving my good draws up at Swineford for the winter leagues, lol!
Posted by Tim Ford at 21:41