After a foray on the rivers it is back to commercials for a few weeks now, not to worried as the Bristol Avon is now very low and clear and pike are causing pleasure anglers lots of problems. I took a bike ride up into Bath in the week and from below Windsor bridge to the gravels was stuffed with chublets, roach and perch which were all up on the surface in the hot weather.

Managed a little bit of prep on Saturday and picked up a couple of the new Preston Space Saver keepnets down at Thatchers, these are narrower and make using multiple keepnets much easier. Also only had pint and a  half of Thatchers Haze so was going to be feeling fine Sunday.

Sunday morning and the weather forecast now had some rain in it, but it was very muggy so t shirt and coat if required. A nice if tad pricey breakfast at the Beefeater with Geoff Francis, Bela and Mike, and then on to the fishery. Terry insists on the keepnets and landing nets being out on the bank dry as soon as you arrive and they are not allowed back in the stink bags until after the match. Looked like we had 15 people fishing today so all anglers would have a bit of room, I was told the near bank had been the better draw, but I went in and drew out peg 6 on the opposite side. I was told this was a flyer by the regulars and I could see why as it is towards the end of the first island opposite peg 22. 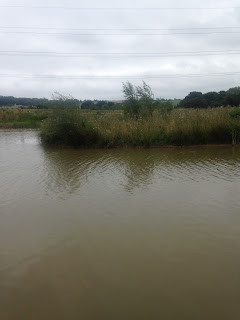 I set up a Tyson 1 for fishing across, but I was disappointed to find just a few inches against the island, mainly due to the lake having lost some water. I ended up fishing just over a metre away where I found about a foot of water, the rig had 0.16 to 16 PR36 for hard pellet. I set up 4x14 with 0.18 to 12 PR478 for fishing meat at 4 metres, and finally a 4x10 durafloat for fishing the margin to my left where I found 18 inches on a bit of slope, set this up to fish banded pellet and I would feed 8mm pellet here.  I fed past the near reeds but in line with them. 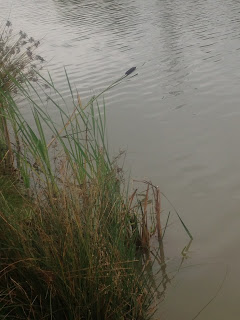 Had some good neighbours today, with Glenn Bailey on my right on peg 4, Bela Bakos was on my left on 8 and on 10 was Shaun Townsend, no mugs there then!

I began the match by potting some 6mm pellets across at two spots on 14.5m, also fed meat short. Going across there were already ducks in the vicinity, and these were to be a pain all day. I fed with a catty and tried to feed the two spots, after about 30 mins I had managed one small carp and lost a fouler. I had to give up trying to feed two spots as the ducks would be straight in when you fed where your pole wasn't. Quite frankly there is not much point me writing about the first 3 hours of the match as I just could not catch anywhere in the peg and I had 3 carp for 7lb plus a couple of tiny skimmers. and a crucian. Bela was only on two fish but Shaun and Glenn had about 20lb, still not great though.

I had tried to rest the far side and feed it whist fishing short, but the ducks loved that and boy were they clever, the little buggers recognise when you pick up your catapult food is on its way, wise quackers these! The only way to feed it properly was to do so when fishing with the pole over and the ducks would retreat a couple of metres. Persevering suddenly the peg came alive and carp were swirling for the feed but I was fouling too many. I pushed the float down to the knot on the hook length and fished 6" deep. This was better and I started to catch with some regularity, and had a couple of good catching spells and was doing well. With an hour to go I started putting carp in another net, the far bank was proving tricky again and liners were a problem and I was frustrated as I could see the carp were still there but sometimes right in the shallow water.

Shaun had know shot into a good lead and Bela was doing well on the paste short, I needed to catch some more fish quick. Dropping in on the meat line again I had a perch which didn't inspire me, but then a lift bite was hit and I had by far my best carp of the day at 8lb. Sadly I could not get another fish here, and went back across and got a couple of fish. The margin had showed no signs of life all day (other than greedy ducks) but at 4pm I dropped a 8mm pellet in and within 30 seconds the float dipped and then shot under and another decent fish was on and soon netted. I managed one more from the margin and that was the end of the match.

Glenn had struggled but still had a few fish, Bela had 80lb on his clicker and I had 81lb, but I had guessed at the last hour as I didn't bother to click it as I caught the fish, I had clicked my first net at 55lb.

Scales started weighing from the car park bank at about peg 27 were Geoff had 40lb, and on that bank Mark Summerhayes had 86lb and Martyn Reyatt had 82lb. Shaun on the end peg on my bank had 128lb and was going to win with that, Bela had 84lb and was bemoaning the 3lb carp that he missed the net with! My turn, my silvers went 2lb, my last hour net 30lb, and my clicked net went 66lb just under the 70lb limit, got that wrong then! My total weight was I think 98lb 10oz, and I was way off my estimate today. Glenn had 50lb and that meant I ended up second on the day and a nice little pick up.

Off to Avalon next week, fishing Tony Rixon's float only as a stand in for Mike Nicholls. Need to sort out some deeper rigs I think.
Posted by Tim Ford at 20:15