I spent the week wondering where to fish on Sunday, the weather forecast was windy and that my my choice harder. In the end Glenn talked me in to choosing to fish a match that Tony Rixon was running at Avalon. I was tying up some hook lengths Saturday morning when I had a call from Paul Elms who offered me and Glenn a lift to the match, this was duly accepted. All prep done I watched the Gas win another home match, happy days.

Sunday morning and the wind was still blowing but not quite as bad as it was Fri /Sat I thought. It was a great run down to the fishery in the van, though Paul was struggling a bit after a heavy night. He only ate half his breakfast at Shiphan, but I would say that it was nothing as good as I have had here before, disappointing. It was good to be back at Avalon, I do like this fishery as you have to work hard at catching and generally nobody runs away with it, plus the wildlife is fantastic. A bittern was heard booming, a water rail was squealing, and I saw egrets and warblers including a cettis warbler. As the draw was started I saw the pegs went from 16 to 48 (there was another match on the other pegs). Never sure where to draw but the gaps inside the islands and corners are generally good. I ended up getting 46, not really great I thought. It is close to the car park and you have an island opposite, as you can see below. 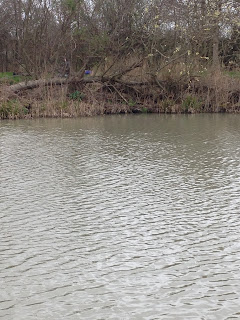 Not sure if you can make it out in the picture but the reeds are on a point and then it goes back into a bay before straightening out. I basically wanted to cast into the corner of the bay. This was tricky though as cast slightly left and your in the reeds, slightly right and you'd catch a branch hanging out off the fallen tree. Still it would be a good test. I set up a small cage feeder for fishing here, with 0.185 to 16 PR38 for banding various hook baits. I also set up two pole rigs but not a lot of point in mentioning them really..

On my left today on peg 48 was Ray White, on my right on 44 was Steve Seagar (again). I have done well off peg 44 before, and it has the gap in island with couple of old pieces of wood in between it. Next to Steve was Geoff Francis, then Mat Challenger. The rest of my section included Mike Nicholls, Jason Radford and Joe McMahon (I think).

When the match began I fed some gbait with micros and caster 13m at 11 o'clock, and some micros at 2 o'clock. I then made my first cast on the feeder and with the wind blowing up my first cast was a little shorter than I hoped for. No signs first cast so out again, feeder landed in almost the same place, I'll take that. 10 minutes later and the tip flew round with an angry carp, but within 5 seconds it had swam into a snag and left the hook in it, that was 1 hook gone then. Two casts later and the tip slowly bent around like a big bream bite, I initially thought liner but then struck and there was a fish on the end. If fought heavy but steady and then under the rod tip was throwing up big boils. I thought it might have been fouled, but I finally got the net under a 10lb common, beautiful fish. On the hour I had my second carp but a little think of 2lb+.

The second hour was dead apart from a 8oz skimmer on the tip, a look on the pole lines was biteless. Steve had 1 carp at this stage and it seemed most were struggling. I then took a 5lb carp and a 3lb carp on the tip in quick succession but everything went quiet again. Steve had managed to get some skimmers on his pole line and I thought he would do well if he could keep catching, but then his 11m section broke on the strike and he couldn't fish over his feed. I tried the pole lines again but only had a 2oz roach, either there were no silvers here or I was doing it wrong. After trying the pole my first chuck back on the tip brought another 5lb carp, perhaps the rest had done it some good? Sadly no, as other than 2 roach on caster, and 4oz skimmer on meat I had nothing else in the second half of the match. I was gutted as though I was doing OK. The anglers on the side of the lake in the other match did OK on the opposite end of the island I was fishing, but they came off the island and tried there poles, and with 90 mins to go Steve got a carp on the lead by the wood, and he had another 6 right up to the whistle, he had easily beat me. Geoff the other side of Steve had 6 carp but said they were all small.

The scales started from peg 16 where Paul Elmes had 57lb including 18lb+ of silvers. He was still the top weight when the scales got to Joe McMahon, Joe's 9 carp and few silvers was agonisingly 10oz short of top weight. Geoff had 23lb and then Steve had 48lb which sneaked him into 3rd place and last in the money. My turn to weigh and I needed to be Geoff to get the section money by default. I had 25lb on my clicker and basically that is what the carp weighed plus a pound of silvers, so I did get the section money for my trouble, sorry Geoff.

As you can see above Paul, Joe and Steve were the top 3. Paul was also top silvers, but the money for the top 2 silvers went to Leon Hubbard and Mat Challenger. I say well done to them as fishing the pole in the very windy conditions was not at all easy.

I was a bit gutted as obviously had I caught a few more in the second half I would have been close to the frame. As far as the casting went today on the tip, I lost one hook in the tree and 2 in the reeds, it was good practice. My only regret is not having 8mm pellets, as I had stuck to filling the cage feeder with 4mm pellets and fishmeal gbait. Steve fed 8mm pellets and I got the feeling he drew those fish into his peg when the lads stopped feeding opposite. I am sure I may have pulled a few myself, but you never know.

The van had done well with Paul the winner and Glenn also winning his section, so we set off home happy, if a little tired. No fishing for me next weekend, will see what there is to do after that.
Posted by Tim Ford at 21:11