Another week passed by with me once again spending a couple of days in Germany. The week started off on a sad note as our youngest cat was found dead presumed run over. Saturday morning and I took last weeks groundbait left overs (a lot)  out of the freezer and as I did so a frozen block of newspaper fell out. I then remembered this was a match pack of joker I'd frozen after the last canal match, well I might as well use that too. There was not a lot of preparation needed but I did make sure I had a couple of float rods in just in case I drew off the bream and would just try to enjoy myself catching on the topper. Everything done I was soon off to watch the Gas win another home game, a few Thatchers went down well as did some strange strawberry cider later.

Sunday morning and I was up nice and early, had breakfast at home and was on my way to the draw with plenty of time to spare. Once at the venue there was no going home as the road would be closed off for the Bath half marathon for quite a few hours. There was a good turnout with I think 36 anglers, the river had dropped from last week but still had a bit of pace and colour. People asked me where to draw for the bream, and other than 16 and 18 I said anything in the 30's or 50's should give you a chance. Kevin got the draw going early and I was about half way in the queue, Derek Coles drew 18 where I was last week, then Adie West drew 16 the same peg he had last week! As I got closer to the tub of tickets I saw the guy in front of me draw peg 61 (Norfolk reeds), my turn and peg 71, dog shite! If there was one area not draw it would be 67, 69 and 71, as well as 77 and 79. I was mortified, no chance at all, and then the guy after me in the draw pulled out 38 which is bang on.

Well I decided I had to give it a go, but with the match being from 10am to 4:45pm it could be a very long day. As I was still moaning Shaun Townsend pulled out 69, and that meant we were the tourette twins lol. I pushed my gear along the muddy path, from peg 18 all the way to 71, not exactly a short walk but it would at least help me keep fit. When I arrived at the peg I was happy to see I could get close to the water with my box and could at least get comfortable. I set up my feeder rod with a 2oz tip this week, and started a little lighter with a 16 PR355 to 0.148. I was short on time so did not set up the float, and Shaun reminded me he had hit loads of snags on this peg last time he had it. I was just about ready before the start, with all the joker put into my bait, and just caster and chopped worm on the tray with some maggots for the hook. This peg is one of the widest on the river, and I fished just past middle where the main flow eased off a bit. 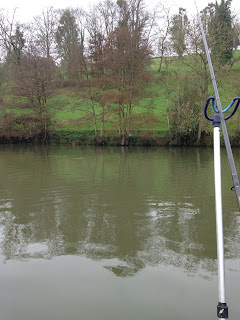 I decided as per last match not to ball it and instead spend the first hour casting a large feeder very regularly. Meanwhile Shaun did ball it above me, I was nearly deaf by the time he finished throwing it all in. My first 5 casts were all met with little taps on the tip, and I had a tiny roach and 2 tiny chublets, then the bites died but no matter I would just keep the bait going in. Two hours in and nothing else had happened (well other than landing a sanitary towel and a stone covered in some sort of mollusc) and it was already looking like being a poor day, Shaun had 3 small fish and had tried the crowquill without any success. Mat Challenger came up for a walk from peg 76, he had put in 40 balls at the start (wow!) and had a few small fish and a trout, I then had a roach about 6oz whilst he was there, but it was a one off.

Around 1pm I decided to go for a walk to see the people who were catching, my section was poor with Alan Brown below the railway bridge on 74 doing best with about 5lb of chub and roach. Going upstream nobody had anything of note until I got to peg 46 with this chap having 3 bream, the chap on 38 had 6 bream whilst Chris Ollis and Warren Bates in between those two had not a lot. Rich Lacey on 36 had 7 Bream, and then the next 5 or 6 anglers all had a few bream. I trudged back up to my peg, Brian Melksham was blanking on 56, and James Carty on last weeks winning peg 59 was still blanking.

Back on my peg I hoped the rest might have allowed a few fish to settle over the feed, but the first cast yielded nothing. Second cast was also without incident and so as I cast out a third time I decided to set up a crowquill just to ease the boredom. I climbed up the bank and got a rod and reel out and started threading the line through the rings, glanced at the tip and it seemed to be bouncing, I did a double take and it was definitely dropping back! I dropped my rod and then stepped of the bank and stood on my box and grabbed the rod, there was indeed a bream on. Towner had spotted my action and came along to watch, a nice bream of nearly 5lb was netted. This was about 2;15pm, sadly this was a loner and no other bites came my way until 3:45pm when I had a whopping drop back and bream number 2 was on, similar sized fish as the first. An hour left and maybe they might have a munch, but no that was it again. I did have two sharp bites right at the death which nicked the worm off the hook, but they were not bream bites.

I thought I might be in with a shout of the section as I heard Alan Brown on 74 had caught no more, but when the other anglers down there came up early having packed up they told me he had taken a bream and skimmer late on, that was then. Mike Weston had the scales and as he was not weighing in he caught our section done quick, well as it turned out only Alan and I weighed in! Alan had 11lb 2oz and my fish went 10lb 9oz, so just 10oz off a tasty section win, never mind I was chuffed enough to get two lids out of the peg.  Walking back James Carty had managed to snare 7 bream in the last two hours on 59 for 35lb, then it was down to the straight for any more decent weights.

Biggest bream weighed was by Rich Lacey and it went 7lb 4oz, however, Chris Ollis reckons he had an 8lber but did not weigh it separately. I got a photo of Rich as I got to him just as he was weighing in. Rich is pretty sure he lost a barbel today, played it for ages, Dean Harvey lost one for sure as he saw his. There were a couple of anglers who lost big fish too. 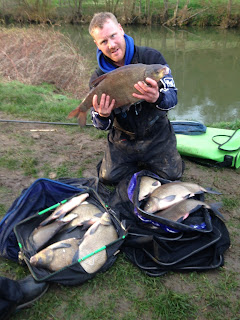 Well that's it for the river again, glad I managed to feel the thump of a couple of slabs today even if I was on awful peg. Well back to commercials for a while now, have to see what, where and when.
Posted by Tim Ford at 20:50