I spent 4 days working in Munich this week, and as I was also going to Oxford to watch the Gas (great 2 nil win by the way) any prep time would be very limited. Luckily Kev Dicks was running an open this Sunday (and another next Sunday) on the Avon at Newbridge, and a bream match on the feeder would do for me.

I had seen the river briefly on Friday at Keynsham, and it was up a bit, enough for me to think the float rod would not be needed. Then of course we had a lot of rain in the early hours of Sunday which was probably not going to help. I had a bit of brekky at home as we were drawing at the Pumphouse and was lucky to load the car just after the rain had stopped. When I got to the draw it looked like there were a few hardy souls going to brave the elements, I think there was 20 of us. Kev did the draw but explained he was not going to fish as he has had an operation on his shoulder and is out of action for a couple of months. First draw was Mat Challenger and he pulled 20, it's done a few bream weights but it's not a peg I like so was glad it had gone. When it was my turn I went pulled 18, very happy with this as it has a lot of bream form, though I would prefer to draw it on a lower river this time of year.

Setting up was not going to take long, just had to be careful getting down the bank which was now very slippery. I set up one feeder rod (my old faithful Drennan DRX Carp Feeder) with a 14 PR355 to 0.165.  I initially had a 2oz tip in the rod, but 15 mins before the all in I lobbed a lead out to about 13m and the tip bent round far too much. I decided that this was no good, so I bit off the line and put a 3oz tip in and set up again. When the match began I simply under armed a 1oz feeder out to about 13m and put the rod in the rest. The feeder was packed with the usual caster and chopped worm, but I did include some dead red maggots too. After about 20 mins of casting the wind was playing havoc with the rod tip and I really wasn't sure I would be able to see a bite. I changed the bank stick position and basically put the rod flat pointed out in front of me, not how you are supposed to do it lol! 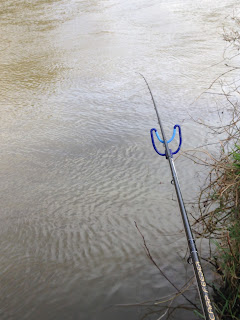 Forty minutes into the match and I had my first bite, it was a good bite to and there was problem seeing it, bream on. Sadly as I got the fish under control and it was down the inside the hook pulled out, bugger.  I think it was about 20 mins later that I had another bite and it was another bream, this time the hook held and I netted one of about 3 1/2lb. I had that fish on a worm and maggots, but no more bites came, so I decided to give the lobworm a go, after 3 casts and about 2 hours into the match I had a whack of a bite and was into another bream. This was one looked to me about 5lb. Glenn rang me to say he was struggling with just a skimmer and a dog roach, and after 2 hours it was tough for most.  I stayed on the lobworm for a bit but the only thing I caught was a pair of skateboard wheels, see below! 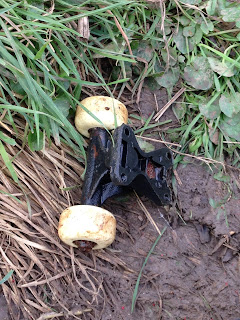 As we just past into the third hour my dendra and 3 red maggots was snaffled again, and when I struck the rod really hooped over and the fish hardly budged. Eventually I moved it and it started nodding, it felt like a good slab and gave a good account of itself right up until it went in the net. We did weigh it separately later and it was 6lb 12oz, so a good fish. Next cast and within a couple of minutes I was into another bream, about 4lb, maybe they've rocked up!  Just over 3 hours in and 4 bream in the net things were looking good, but then the wheels fell off and the next 2 hours passed by without a bite, oh dear.

With an hour to go I knew Jerry Pocock on peg 59 had 8 bream, and Glenn Bailey on peg 52 had 4 bream, so all to play for. At 3:20pm I finally had another bite and bream number 5 was landed. Just after this Derek Coles came and sat by me, he had struggled on peg 26 and had packed up. The howling wind had abated slightly, but I left the rod in the same position, although by now the river was a bit higher and faster. Whilst Derek was there I had an indication but struck into thin air and the bait was untouched, this had happened about 3 other times in the match and I assume it was liners. Three minutes before the end of the match and what looked like a bite so I struck, bream on! Another good fight in the flow and bream number 6 at 5lb was netted. That was my lot. I did not realise at the time but Mat Challenger was also sat behind me and he took a video of me playing the last bream.

Glenn rang to tell me had caught 2 bream on his last two casts on 7 red maggots, and he also had 6 bream, but with a couple of other fish I thought he would have more than me. As the match finished heavy rain and wind returned, and as I packed away my hands went cold very quickly.

When the scales arrived from above me only 1 person had weighed, the lad above me on peg 16 had 1 bream and lost 2 and didn't bother to weigh. My 6 bream went 30lb 1oz, so a nice 5lb average. What had surprised me was the complete lack of roach and eels, I always expect to catch some of them in coloured water, but today was more like fishing in gin clear conditions waiting for a bream, strange.

Back at the pub those that came back commented on the good condition of the bream, it seems we all caught healthy fish with no sores or damage. Jerry ended winning, he got stuck on 8 bream that went 39lb, Glenn had 31lb 8oz and then it was me. Section money by default went to to 22lb and 20lb, so not prolific bream fishing today. The weather forecast looks OK at the moment for the week ahead, so I will fish the next match here and fingers crossed draw another flyer.  The lad next to me on 16 took this catch shot picture, as you can see nice fish. 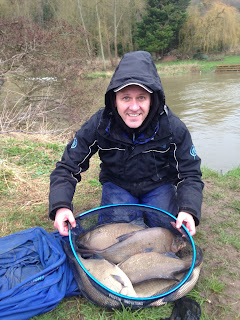