I had a text in the week from Tony Rixon asking if I wanted to fish a match at Landsend, and as I wanted to give Windmill a miss until the fish spread out I thought it would be worthwhile. I was actually in Ireland working when Tony text me, a few busy days there and only time for a couple pints of Guinness. Once I was back home I booked in along with Glenn Bailey.

Glenn picked me up on the morning, first time we have travelled together for ages as the gear won't fit in one car. However, as Landsend requires no rods we thought we could manage it, it was a squash but we just got it all in. Straight forward journey to the venue and then had one of their tasty breakfasts to keep me going for the day. Tony had enough anglers to peg Match and Lake 3 but was going to run each lake as its own match to make the payouts more spread out and fair. I always like to be on Match, but I always seem to draw Lake 3, and today was no exception, peg 70 on Lake 3. I've drawn this peg a fair number of times, and it's a corner peg which usually holds small carp and some F1's and silvers.

After the short walk to the peg I surveyed the options, a weed bed to the right, a spit in front of me, and into the left hand corner the end bank which is full of lots of roots and branches and is a dangerous place to venture! 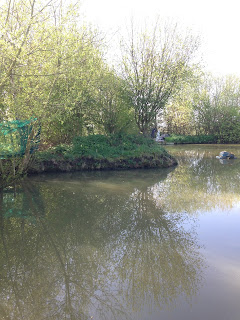 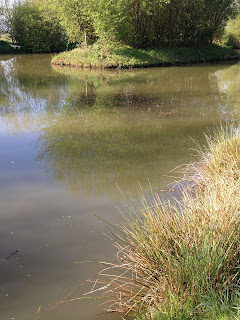 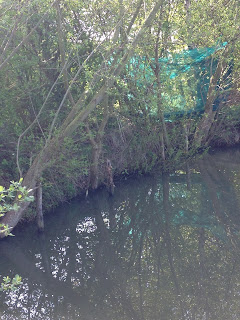 Fishing this peg before I have always just missed out on silvers payout, section etc. Today I decided I was going to go all out for silvers and try to get some early F1's. Rigs were a 4x12 PB Carp 3 with 0.12 to 20 PR36 for fishing on the deck by the spit. A similar rig but just a bit deeper for fishing soft pellet by the weed bed and at 11m in front. A rig for caster at 5m, a shallow slapping rig in case the F1's were up in the water was also put up.

On the all in I Cupped a small amount of micros by the spit, by the weed bed, and 11m. I fed casters by hand at 5m regularly. As I put my top set on my pole  with a 6mm pellet in the band Chris Fox opposite on 41 had an early fish by the aerator. I didn't have to wait long to myself for a bite and a little fantail was netted. Next drop and a longer wait and before I knew it a carp swam all the way down to the corner and the rig was gone. New rig on, back out still fishing light hoping for F1's, it was a bit slow and Chris opposite who was targeting carp was getting the odd F1. I had another fantail and then another carp was hooked and I got this one out as it swam out nicely. Another Fantail thingy and then another carp hooked which went to the end of the spit and snagged me solid, what the hell? New hook length required, but I decided now to switch up to 0.16 and a heavier elastic. Chris now started hooking carp, and it seemed to push the F1's around to me as I had a few in the next 30 mins.

Paul Faires was on peg 68 and he had started next to the weed bed, he'd managed a couple of carp and F1's but was not tearing it up. The spit line had gone dead for me, so I tried a bit to the right but nothing happened, it was all very quiet. I started to toss pot in some 4mm pellets and loose feed some to try to draw some fish. The line down to the end bank hadn't produced a bite so far, and the 11m line yielded on 4oz skimmer. Back on the spit and I had a couple more F1's and after 90 mins I though I might have 10lb of them so going OK. After this I never had another F1 all match, they simply disappeared, and against the spit I caught the odd small carp.

Never mind time to try the caster line and catch some proper silvers, ummm three 1oz perch was not what I expected. Finally caught by the end bank 2 carp in quick succession and then nothing else, not a bite here again all day. Paul was virtually biteless for a few hours, and all I could get was the odd carp across. Chris was now catching odd carp in his margins and was the clear leader at our end.

I tried the slapping rig a few times, it never yielded a F1 but I did get 2 carp on it and a 6oz roach. Over by the weedbed my soft pellet was snaffled by a 2oz skimmer, a little roach then a carp. After this no more bites! What ever I did I could not get another silver fish off of any line. The wind had got up and it made life hard, the only place I could get the odd bite was by the spit, but fish 14m in the wind was hard work. I fished my depth rig and spread the shot, but in the last 90 mins getting a bite was very hard, then on the last 3 drops I hooked 3 carp. Game over. By my clicker I had 50lb of carp, and I guessed 12lb of silvers, I wasn't sure that would be enough.

Chris started the weigh in on my peg, my silvers went 13lb 3oz, and the carp 55lb 6oz, 68lb 9oz was not going to win any money so I hoped I could take the one silvers prize. Paul next door really struggled and had 20lb, Rod Wootten on 66 did not weigh, and then Stu Barnet on 65 had 77lb. Top weight on my bank was Anton Page with 106lb from peg 58. On the opposite bank Shaun Townsend had 110lb from peg 46 and Chris won the lake with 130lb. Nobody beat my silvers weight so I would take home a few quid.

Over on Match Lake it fished really well, with Tony Rixon winning with 180lb from peg 6, and next door on 5 Gary O'Shea had 150lb, there were a few other tons but silvers weights were not great with 15lb top I think. More info on Tony's blog.

Glad I put some suncream on at the start as the sun was quite strong, although the last hour it went cloudy and the temperature dropped to 12C and we all felt the chill. I had an enjoyable day, frustrating at times, and surprised I could not catch more silvers, but there you go.