Another match run by Tony Rixon and I thought I'd give it another go with the hope of drawing Match Lake this time. Sunday didn't start off great as I was awake for a couple of hours in the night, and woke up hanging. The journey down was rather slow with a bus and some early Sunday drivers out, but I got to the venue in plenty of time.

Breakfast as usual and then onto the draw, I got my wish getting a peg on match lake in the shape of peg 5. Gary O'Shea had a good weight off of here last week and Leon Hubbard told me how he caught most of the fish. The wind was forecast to be 20mph today but depending on the direction would have to see how it affected the presentation.

Got to my peg and walked past Andy Hembrow on 3 who wasn't very enamoured with his draw, on peg 6 was Mark Summerhayes. You can see from the picture below the island opposite, as it goes away from you the bank is undercut and I would be trying to flick my pellet under here, although it was very shallow. As you can see before the match it was not really windy. 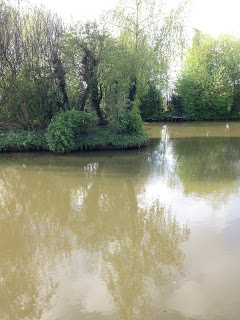 Also to a picture looking up the lake, I would have a go in the margin here later. 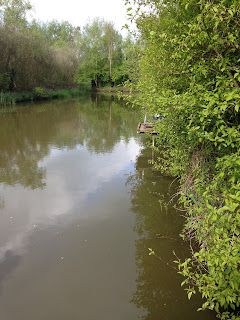 When the match started a fed some 6mm pellets across to the island in a couple of spots, and then started on meat at 5m. First drop in and a bite, it was a 1lb F1. Sadly that was only bite here for 20 mins and as Leon on peg 18 was catching across and Mark had a couple I had to go across. It was a bit of trial trying to get the pellet to land close to the island without catching bits of ivy and I lost a hook when I misjudged it. It was though completely dead for me, and I could not get any indications, it wasn't until 70 mins that I had a carp of about 5lb across, but it was a one off. Leon was catching well, he had already gone into his margins and was catching there too. Mark and Andy either side were struggling like me.

I decided to have a look for some silvers, so fed a few 4mm pellets at 11m, and at 14.5m off to the gap. Both those lines yielded not a bite for an hour. Halfway through and I had a couple of F1's from the 14.5m line, but that soon died and the wind was no becoming a real pain. I just couldn't get bites anywhere in the peg, I even fed some caster, but like last week it didn't really produce for me. With a couple of hours to go I managed to snare a double figure carp from my right hand margin, but alas another one off and no other bites here.

There was now the odd fish swimming around on the far bank, and I had a carp of 3lb and then mugged one about 9lb in the gap. The wind was now very bad, and trying to get my rig near the island was very hard, once the rig went in and the line above caught the ivy, I left the float there and had a bite and struck, fish on and the line came free. This fish went a bit and I soon realised why, as it was a 7lb ghostie hooked in the wing. I lost a fouler and then the wind became to much.

Mark next to me who had endured a barren time started to get odd bites on meat, ad had a few skimmers and odd decent carp to the end of the match, my 5m meat line started to show life with 25 mins to go, I had a perch, big skimmer, 2 carp and lost 2 foulers. End of match. I chucked back about 40lb of carp and 6lb of silvers. I'm not sure what Mark weighed but here is him just beginning to weigh in. 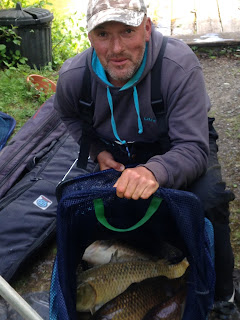 Well that was a torrid day, I've never felt like there was many fish in the peg all day, but was surprised that I could not catch any F1's either. I've no clue as what I could have done differently today, and it soon became apparent that the anglers on the opposite bank were going to take all the money, with Shaun Townsend on 15, Leon on 18 and Gordon Cannings on 22 all having 130lb+ I think, top silvers was also on peg 24 (Dave Lewis) and 13. Ho hum!

I was not going to hang around, but before I left I shook hands and said goodbye to deluded City fan Stu Barnet who is off to Australia again. Stu left on a high note winning lake 3 he told me with over 140lb, well done and good luck with the move back to Oz.

Well there's not a lot more to say about today, wasn't expecting to struggle like that, just have to put it down to one of those days. Full results on Tony's blog.
Posted by Tim Ford at 21:19