My choice of fishery this weekend was based upon being as close to home as possible, I didn't want to have a very long day. The reason being I was going to have an early start Monday morning getting a plane to Ireland for 3 days of business meetings. Windmill being just 15 mins away was the obvious choice.

I had a great start to the weekend after getting invited to watch Rovers in the hospitality area, free food and free cider well it would be rude to say no. Glenn and myself were very thankful to Mark Tanner who invited us at late notice. I drank no more after we left the ground (happy with a win) as I was already well oiled. That meant Sunday morning I awoke feeling fine and dandy and and was at Wetherspoons in Kingswood before they were open. Also there were Mike Nicholls, Geoff Francis, Gordon Cannings, Paul Elmes and Shaun Townsend. A large breakfast and tea set me up for the day, service and price as well as quality here is very good.

We had to enter the venue today via the field entrance on Westerleigh road, this was due to work on the pylons, not for me climbing all the way to the top like the experts were doing, I've got no head for heights! The draw was delayed 15 mins to allow for anyone who had to drive the long way around, and in the end I think there was 20 fishing. I paid my pools and bought some pellets as you have to use the fishery pellets, they look like coppings to me. Good to see some of the regulars and some familiar faces and an old school mate Paul Staite. Talking to people it seemed the car park end of the fishery has been best, I drew peg 7 which is in the middle of the lake in the gap between the islands, not my first choice really.

I got to my peg and on flyer peg 6 (I drew it once and bagged up) was Mike Nicholls who had won the silvers from the same peg last week, he was "more than" happy. As I surveyed the peg I realised that due to the roping off I was able to fish towards to the two islands, though it would have to be on a wag or lead. I took a few pictures, but with the sun in front of me it was tricky. 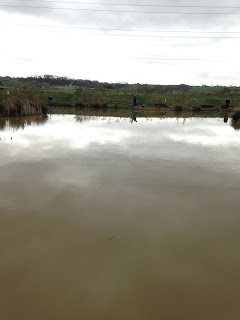 A view of the island to my right in the first picture, where I tried to fish between the rope stake and the stick ups.  The island to the left was more open, but the wind was blowing away from it so I planned not to target it that much. 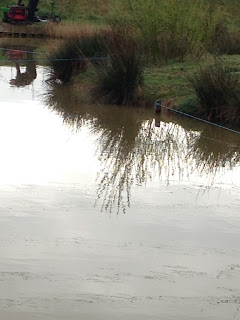 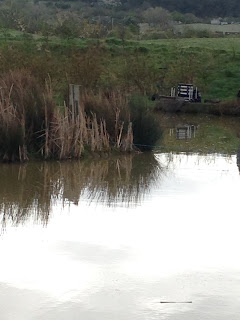 When the match began I fed some 4mm pellets at 13m with a cup and fed some 8mm by catty to the islands. Mike was going to fish for silvers and as ever he was starting short, I therefore hoped that my feeding to the island on the right would bring fish in as Mike would not feed across, more of this later. I dropped in at 13m with a 6mm pellet in a band, I probably waited no more than a minute for the float to bury and fish on, a 3lb carp first drop. Shipped out again, didn't have to wait long for another bite and soon a 1lb carp was in the net. Sadly this was to be a false dawn as I never had another bite on this line all day despite dripping bait in all day. After about 40 mins Gordon Cannings on peg 8 had 2 carp on wag, so I decided to have a go. I had a couple of casts without any joy and then had a bite which I hit despite having a large bow in the line. A 3lb carp was the culprit. That proved to be a flash in the pan too.

At this stage it appeared the venue was fishing hard, Mike was struggling to catch silvers and certainly nobody was bagging from what I could see. My pole lines were tried and produced nothing, another go on the wag and another carp, I had it on for a while but I think I pulled to hard as the hook pulled out under the rod tip. It was easy to cast the float in to the right island as the wind was slight and from my left, presentation was good but then the wind got a little worse and I lost a fouler and kept thinking that a straight lead would be better. Eventually I got off my arse and set the lead up, a nice little chuck toward the shallow water, and within 10 mins the rod was pulled round. I was happy to net a better fish of 4lb. Soon after the rod was literally pulled in and I hung on as a good fish pulled hard, this one I guessed was about 8lb, a lovely common.

During the middle hour or so of the match I took a few more good size carp on the lead, including one from the left hand island. Things were slowed down for a bit when I hooked a duck which decided to fly/swim under the rope into Mike's swim, I pulled as hard as I could but could not retrieve it and it was flapping about in front of Mike which annoyed him greatly. The duck got into the margin by Mike and I asked him to net it, Mike;s idea of netting it was to snap my line with the net on purpose, I may have used a very rude word to describe him. But I'm not one to worry about these things and I set up all over again and had a couple more carp

With about an hour and 45 mins I had put 48lb on my clicker, and I was sure I was doing OK, not winning as Joe McMahon was catching well up on about peg 1or 2. Mike had gone for a walk and confirmed I was doing OK, he also said he had to make a decision and had decided to get out all 13m of his pole and go across to where he could see carp mulling around. Whether it was co-incidence or not Mike started to catch the odd carp, and I stopped. I never had another fish until the very last cast on the wag to left hand island. It was frustrating as I watched Mike do well whilst I just could not get a bite other than the odd liner, and I knew it would cost me.

Sadly I never had a bite on the pole lines in close, but to be fair down my end of the lake nobody did, and it was incredibly poor to my left. The scales soon arrived, and Mike was admitting to 40lb, but I knew he had more, I had 50lb on the clicker. Mike weighed 52lb 5oz, including 7lb+ of silvers, my carp (I had no silvers) weighed 51lb 15oz. Gordon had 22lb and after that it was worse.

Joe was an easy winner today with 112lb, and I believe Shaun Townsend was on 25 and had 59lb and next door on 26 Paul Staite had 56lb.  Mike won the silvers, and I was then next, so effectively one out of the money. As I expected the last 90 mins were my undoing. Still I had a few fish and enjoyed the lovely warm sunshine and light winds. Mike treated us to a couple of pints from his winnings and as it was his birthday he said, so fair play.

Spring is here, I could tell not just because of the willow warblers signing, but the amount of red faces after the match!
Posted by Tim Ford at 20:57