This has been a busy and tiring week, for me at least. I had a sore throat and a cold Tuesday (violins out) which was taking its toll. Wednesday I went to Tom Bailey's funeral, and although it was sad to say goodbye we all had a few drinks to keep the family supported. Jaded I had to drive up to Warrington the following day, and back into work Friday feeling knackered. I had a couple of hours free on the evening to make some rigs up for the match.

I have two people to thank for this match, 1) Norman Sterry for running it, and 2) Mike Nicholls who alerted me to the match and got me in. I had never fished Mathern Mill before but had seen from Norm's facebook and Stu Barnett's blog that this place was well worth a visit. Today's match was a silvers event, and on the lower lake, having never seen the place I tried to get some info. Mike Martin Davies got me some crumbs, and Hadrian Whittle really helped me a lot. It seemed 50lb+ of silvers were needed to win, skimmers, rudd, hybrids and chub were all in the lake. Getting to the venue is straight forward from Bristol, straight down the M4 onto the M48 and in to Chepstow, Well it should be, but I missed every "massive" sign on the M4 telling me the M48 was shut, and so I made a right cock up, my fault! Got to Aust and had to go back up the M4 to Bristol to turn back around and go into Wales on the M4 and then back up the M48! I was 20 mins late meeting Norman, Mike Nicholls and Geoff Francis, and once again Geoff had pre ordered my breakfast.

Onto the venue at last and paid the pools, and said hello to the assembled baggers, Gabriel Skarba, Ziggy Slowinski, Andy Gard and Rich Candy who won the last match here. The draw was done, little pegs with numbers on, and I pulled out peg 2 which meant absolutely nothing! Gabe told me it was one of the few bad pegs and I would struggle to compete, great. Drove to the lake and parked my car right behind my peg, nice. There was an island which I could fish to, but it was a fair way off and feeding maggots over there would only be possible with a wind behind me, which at times there was. Here is the view. 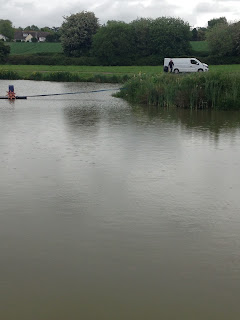 I was the end peg on my bank with plenty of room to my left, the Welsh angler to my right was Ryan Whitehouse, he told me it was not great and a lot of carp frequented the area. Norm Sterry then rocked up on the peg on the end bank, and he would be able to easily fish to the end of the island past the aerator. Again the lad next to me commented that his peg was a flyer and held a lot of chub. I was hopeful of drawing some of them to me! I set up a 4AAA insert waggler with 0.13 to a 16 PR412.

I decided, as everyone was saying 50lb was needed to frame, to feed positive on the pole at 13m and in went 8 balls of Sonubaits F1 with some chopped worm and caster in it. I then started on the waggler feeding decent amounts of maggots. To start the wind was helping me get the bait quite close to the island, and I was getting bites from rudd straight away. This rudd were anything from 3oz to 6oz and so worth catching, and the first 30 mins were quite hectic, then things began to slow down. I found I had to come away from the island now and fish a bit deeper to keep the rudd coming, but the bites were harder to come by and hard to hit. Other than a few early skimmers to my right I had not seen anyone bagging. After about two hours bites stopped on the waggler and it was time to try my pole line. It wasn't an inspiring start though, a few small rudd to start and when I couldn't get through them I put a bit of worm on. No more rudd, but two small perch and an eel were not doing my confidence any good. I topped up and then had a lift bite, but it was a ruddy carp! I tried the waggler again, amazingly I had bites again from rudd. Some of the fish I caught had sores and scratches and had obviously been spawning, could be a reason for the harder fishing,

This is how my day went, I would get some rudd on the waggler, keep changing where I cast and the depth until bites stopped, then try the pole. I hooked a carp on the waggler and several more on the pole during the match, all were lost as I pulled hard. Ryan to my right hooked more carp than me and he struggled in the last few hours. I did manage to catch a couple of skimmers on the waggler, but the chub would not budge from Norms peg, and during the middle of the match Norm had about 8 or 9 of them. Some skimmers finally found their way onto my pole line, but if I caught two that would be it, it was then back to little fish or a carp. However, as it seemed the venue was not living up to its pre match hype I was happy to keeping plugging away. It was a day I enjoy, working hard and keep trying little changes, though truth be told my arm was aching from so many casts on the wag lol. The last hour was harder on the waggler, the wind had dropped and so feeding was now way short of the island, but I did manage to get a skimmer on the pole 15 mins from the end. Poor old Norm had mostly carp in the last hour on wag and pole but he still had a lot more than me when the match ended.

I wandered down to Gabe who said he had struggled for 20lb, and below him Mike Nicholls said he had less. I hadn't considered what I had, 8 or 9 skimmers plus the rudd, I hoped for about 23lb.  The scales started on the other side of the lake, and this was where Rich Candy set the pace with 34lb 12oz on the same peg he won from last time. Andy Gard had 23lb and Gabe had 20lb. Ryan had 14lb, my turn next and I was happy to hear 25lb 13oz called out, so I was in second place with three anglers left, and next was Norman. He had a nice net and with the chub he weighed 34lb 14oz, so pipped Rich to the win. Norm with his bag of fish. 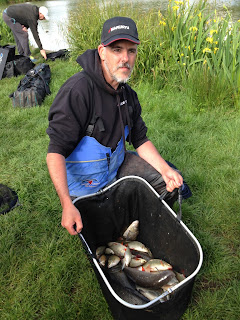 Well third on my first visit and £50 and I'm well happy with that. I think if fishing harder caught a lot of people out, I think I just accepted it being not such a good peg and took it steady and tried to keep bites coming. A rewarding if tiring day, and thankfully the journey home was straight forward! It's only 30 minutes from my house and I hope I can go back again and sample the fishing when it is better. That's it for a while, no fishing for a couple of weekends, followed by 6 days of fishing in a row.
Posted by Tim Ford at 20:29