After a couple of weeks of not fishing, and hence no blogs, I was really looking forward to this week of fishing. I met up on Saturday morning with the lads (Glenn Bailey, Geoff Francis, Mark Woodington, Mike Nicholls and Gordon Cannings) at Viaduct, they had all met for Breakfast first but I wanted to go later after celebrating my eldest daughter's 21st Birthday.

The first day's match was on Campbell lake and it was a pole only affair with a limit on the pole length of 13 metres. I drew peg 129 which I was more than happy with as I would be able to fish next to the spit as you can reach it with 13m. On peg 130 was Woody and on the other side of the spit was Alex Murray. I walked out on the spit to clear about a bit of foliage and walked into a bramble strand that cut my nose, ouch. I set up a rig to fish meat at 5m, banded pellet at 13m and a rig for banded pellet by the spit. My plan was to start at 13m feeding very small amounts of 6mm pellets, whilst feeding 8mm pellets to the spit. I was hoping to catch a mixture of silvers and carp at 13m, but after the first hour I had landed one fouled carp and lost seven! Woody was fishing paste and only had two carp and had also lost a lot of foulers. The carp were not shallow, these foulers were hooked on the bottom, so they were a pain.

I had a quick look short after an hour but nothing was doing there, so I went to the spit as I had seen a number of anglers catch in their margins. The fish were obviously there as the first time I put the rig in it danced around a bit. I soon had a carp in the net and the next 90 mins were great fishing with regular bites but it gradually slowed and then there were no indications at all. The remaining match for me was a struggle and the last hour really did not get better. The only place I could occasionally get a bite was on the end of the spit. The wind got up really bad early on and it made holding the pole hard, and a few plants got blown into the swim which caused me difficulties on the spit, and a few lost hook lengths. I lost a carp close to the end which got into one of the plants and snapped the line. I had over 100lb on my clicker at the end of the match but I couldn't see me doing well with that.

It turned out Alex had won the match on the other side of the spit with 223lb, he must have realised he had some fish in his swim because before the match began he went looking for spare nets. Jack Billet had 167lb from 118 and Ash Tompkins was 3rd on 115 with 166lb.  I finished 9th with 130lb 13oz, with Woody scraping the ton next to me. Performance of the day for me was from Mark Jefferies who drew peg 135. Mark has not fished for about 15 years, and used to be my team captain, and he had 105lb, fair play.

After the match we picked up the keys to the lodge and set about settling ourselves in, well we actually filled the fridge with bait, beer, cider and cheese! These lodges are out of this world, well kitted out and very comfortable and relaxing, and of course the surroundings are simply amazing. 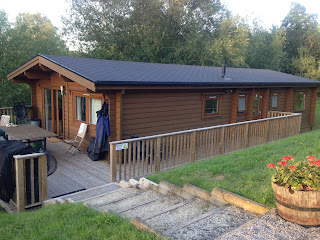