Up quite early Sunday morning as I had drive to Landsend, Mike and Gordon were also fishing this match, but Glenn, Geoff and Woody went to Summerhayes. On the way to Landsend I had a red van behind me and I soon realised it was Nick Chedzoy. That was handy as I was totally relying on my sat nav and when Nick turned off left on a road I reversed back and followed him. We drove through some lovely landscapes but the roads were, well barely roads in places lol.

At the fishery I had one of  their breakfast which was to be the first of 5 for me this week. I was standing in today, I think it was for Adrian Jeffery, as I could not commit to this league due to too many dates clashing. Never sure which lake to draw on, though I would say I seem to do better on Match with lake 3 my least successful. Well I got my wish getting peg 6 on Match, but many people were turning their noses up at it due to having 5 and 7 in, but a couple were saying it could be good, hmm.

Got to the peg to see I had the point of the island, but I could not fish it due to large foliage in the water as you can see. I opted to slap a rig in the open water and fish to the  right of the foliage against the island which my neighbour on peg 7 said was fine. 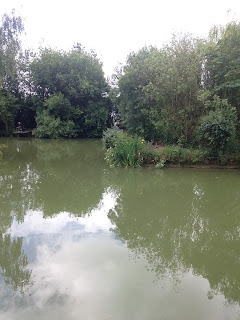 My five peg section had Gordon on 1, Pete Notton on 3, Rich Lacey on 5 and a chap called Pete on 7. Things got off to a bad start when my rod holdall zip split open and I could not close it at the bottom,. Then I went to apply sun cream and took off my hat which I had perched my sunglasses on, sunglasses are now in the silt of peg 6. Ah well onto setting up. A 4x12 rig for meat at 5m was set up, I tend to use 0.165 exceed to a 12 PR478 for this. A 4x12 rig for pellet at 9m where I was going to try to catch some silvers, a 4x10 rig for the island (it was that shallow the float was pushed down to the hook length not) and a rig for slapping which never so much as trembled. I was concerned I was going to a battering off Rich as his island was alive with carp!

I began at 9m where I carefully toss potted in a few 4mm pellets and had a 6mm pellet in the band. I soon had a bite but the amount of elastic streaming from the pole told me it was a carp. Taking my time on the light gear I was able to land a 4lber. A couple of small roach were the only silvers I had, but then I landed another carp. A quick look on meat was only met with roach, so it was off to the island as Rich had taken a couple over there. I had fed some 6mm pellets over there and could see the odd carp moving, so I was not surprised when the float soon disappeared and carp no 1 was in the net. After 30 mins here I had another 3 carp and I was really happy and thoughts were of a good day. Well that was a case of jumping the gun as the carp became incredibly cagey and I had nothing for an hour or so.

I went for a walk and my section was really tough with everyone else only having at most 3 carp. Rich was having his head done in by all the carp showing themselves by the island but not taking his bait. I had some gbait with me (had been in the freezer for ages) and so I decided to put some of that in across as I could not catch on pellet. I changed the hook to a 12 PR478 and fishing either a worm or bunch of dead maggots I had a couple of quick fish before it was a long wait to fool one, but at least I was catching now. I noticed a fizz on my meat line near the end and I dropped in on this and had 2 carp but lost one which snagged me about 11m out in front of peg 7. One thing I did today was to fish about 4 feet of line above the float on the island rig to keep the pole away from the carp. However, it was noticeable that at times they were still spooked, because you could sit waiting for a bite and see no fish activity, and then if you came off the island within a minute carp would be back in feeding.

At the end I thought I had 70lb, nobody else in my section was admitting to much more than 30lb so the section win looked likely. My weight was confirmed (once I had managed to retrieve a snagged keepnet) as 80lb 12oz and did indeed win the section comfortably. I could not trouble the frame, and once again Tony Rixon and Trig showed their class by coming first and second.

When I got back to the Lodge I was surprised to see that Geoff, Glenn and Woody were already back, it turned out that Summerhayes had fished pretty pants with people struggling for a handful of fish. Geoff did manage to get a few and framed so we had a few ciders that night to celebrate.
Posted by Tim Ford at 18:33