It was a bit of a struggle getting up early, that said for some reason my body clock had me waking up every day of the holiday around 5:30 am, I've no idea why, may have been the light coming into the room, may have been Glenn's snoring.

Got myself ready and Glenn loaded his car with his and my gear as got my daily routine on the loo done. We were headed to the Bridge Inn Hotel which is close to the fishery and is used by many of the visiting anglers. Breakfast is good value and it was very popular indeed. As we arrived at the fishery I spied Charlie Barnes who was down to watch a bit of fishing, good to see him out and about, I also saw Mark Thomas (son of Jim) who have not seen for many a year, as well as all the Viaduct regulars such as Ray Bazeley, Mike Chapman, Eddie Wynne, Gabe Skarba, I could go on!

I like this venue, and I would fish it more if I could but it seems opens are not on Sundays (well not for my age group) and so this was my first visit back since the holiday last year. I would like to have drawn on the island, peg 5, or on a bridge. However, I could not believe it when I pulled out 31 the same peg I had last year! Geoff Francis also pulled the same peg he had last year, 27, what are the chances of that!

When I got to the peg I noticed straight away that it looked different, I had been told the lakes had been trimmed back, and in some cases a shelf cut out, and certainly those spiny grasses were much reduced and I had a couple of bare bank spots I could fish to. I walked around to them and cut back the plants that were above the bare areas to make life easy today. View from my peg looked something like this. (That's Gabe's new van, the bright coloured one!) 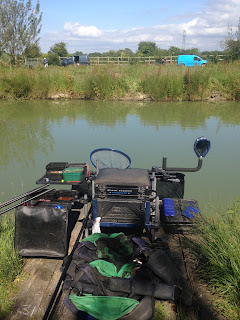 For company today I had Mike Chapman on Bridge peg 33 (no surprise there lol) and Adriano Mercato on peg 29. I had never met Adriano before but his girlfriend made me laugh when she drew his peg and immediately apologised to him as it has been poor area.

Last year when I had this peg I had a torrid time with foulers and caught well for one spell which got me into the frame. I hoped being able to get to the bare bank might lessen the foulers today. I put a 4x10 rig up with 0.16 to 18 PR36 for fishing in 12" of water to the middle bare bank as this was a fairly flat area. The other bear bits were in my opinion to shallow or not flat, but to the right it was flat about a metre out from the bank and 12" deep. I set up a rig for the margins where I planned to feed gbait and dead maggots. That was it I was going to pin my faith in these approaches.

On the whistle I fed probably no more than 30 4mm pellets over with a pot to the middle bare bank tight in, and to the right where I had 12". I then put a 6mm hard pellet in the band and shipped over, feeding lightly with a catapult was all I was going to do. The reason for light feeding was two fold; 1) I thought this might reduce foulers, 2) With signs of spawning and hot weather I didn't think heavy feeding was going to be right. When I had my first bite and I hooked a carp I awaited for the elastic to ping back, but it didn't, first fish was in the mouth! In fact the first hour was pretty steady with most carp hooked in the mouth and I had 21lb on the clicker and happy with that. The next 30 mins things got slower and by the time the two hour mark came I was on 34lb but now struggling to get bites. Till now the middle bare bank had caught all bar one of my fish. At this stage Lewis Jones on 33 had been bagging, and I could see Tony and Ray on the Island catching well. Geoff on 27 was blanking.

The next hour was pants, I might have had one fish out and certainly lost a few foulers, I think at this point I was feeding too much bait, trouble was if I fed nothing I had no signs, feed something I got fish in the peg but they would not take the hook bait. I cut back to feeding the odd dozen pellets, and then eventually with about 2 1/2 hours to go it was like a switch was flicked on and I started to get regular bites and fish in the mouth and fairly motored for an hour. Then just like that the last hour came and back to few indications and odd fouler, the margin line only gave me two F1's and a small carp, but I do think I fed this too heavy and not with the right bait. This is because Mike on 33 started catching carp in his margin on maggot where he had fished for silvers. Once again a bad last hour was I was sure going to cost me, frustrating but I will say I caught much more than I thought I would from the peg. Not long before the end Geoff had his first carp, well it caught him really. He was tying rigs with his pole across his knee with a rig in the margin, the next thing he knew his pole was in the lake! Luckily it stuck under the next pallet and Geoff got the pole and the fish out to avoid a blank lol!

Match over and whereas usually it is the carp that seem to know it is "feeding time" today it was chickens, and they all of a sudden appeared behind me including this clucker. 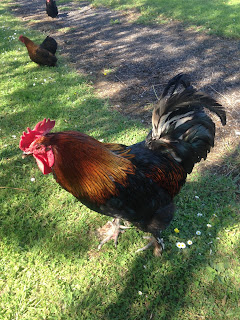 I knew I wasn't going to win this match but was hoping to scrape in the frame, word was Tom Thick was an easy winner, but I knew Tony, Ray, Steve Shaw and Lewis had plenty, Gabe on 24 did too.

I had about 90lb on my clicker, but after over estimating yesterday I said I had 80lb+, when Lewis weighed in 81lb 3 I hoped I had more, and I did with my weights totalling 94lb 5oz. Now I had to wait for news of everyone else. Eventually I was confirmed as coming 4th, last in the frame, with Tony Rixon pipping me by 10oz for 3rd. Tom Thick won from peg 21 with 153lb 15oz, and Ray Bazeley on peg 5 (next to Tony) came second with 101lb 11oz.

I enjoyed the day, and I felt more in tune with what was happening than I did the previous day on Lodge lake. That said this fishing the far bank with pellet is similar to that I did at Cider Farm many years ago, and I had a lot of success at that venue.

After the match we had plenty of food in the Brent Knoll Carvery, and a couple of cold lagers were just what I needed to cool down. Back at the lodge it was a quick shower and back up into town for more pints not getting back till, well no idea actually, but it was bloody dark walking back to the Lodge lol.
Posted by Tim Ford at 21:46