Finally back on the river after the enforced lay off and my holiday. In past years I have avoided fishing the Avon until the end of July, just because generally the fishing is usually getting better by then. My view is there is a hell of a lot of natural food in the river plus the fish spawning make it a poor start. However, reports were of good catches so far and maybe the early warm spring had got the fish spawning early.

Draw for this match was in McDonalds in Bath, this was sadly due to the rugby club in Saltford having a change of staff and not wanting to host us anglers, shame we had a good run there. Bought some McDonalds shitty breakfast meal, then paid my pools, and said hello to the many friendly faces and quality anglers. I was really hoping to get a peg on bream today as I was pretty sure they would win the match, a few have been caught in club matches and by pleasure anglers. Swineford and the long ashtip would be best for bream I thought. Once again though, I ended up pulling a low peg down the Crane, absolutely no chance of bream for me.

I got parked up and walked the up the river, into the little ashtip field and saw my peg number was in the bay, 1 below the wader peg. A good peg for roach and dace, and a chance of chub on the waggler I thought. However, I had a problem, there was an angler in the peg already, and when I advised him he had to move he was not impressed and at first refused to move saying he had the same problem last week. I kept my cool and ran through a few things with him, eventually he saw sense and decided to move on, but he had been fishing for an hour or more he said. 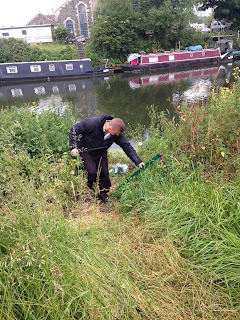 As you can see from the picture all was calm, there was little wind, a little drizzle came and dampened us for a few hours. My thoughts were how could I possibly do a weight from here, I couldn't see me catching enough roach to win dosh, so would need to get a chub or two also. Setting up was simple, a 4AAA waggler with 18 to 0.12 to fish maggot 3 feet deep. A 1gm pencil float with 18 to 0.10 to fish caster / hemp at 13m, a 4x18 for the same line to fish on the drop. I was thinking of other rigs but when plumbing up it was only about 7 to 8 foot deep, and at to around 9 metres there was some streamer weed under the surface and I was snagging up on the pole. Even just trying the rig without a plummet I was catching weed, in the end I put 3m of line above the float, and had to overhead cast the rig to get past it! You cannot see it in the picture as it was about a foot under the surface. 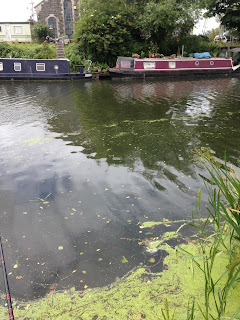 With the water very clear my plan was to start on the wag and mag and feed hemp / caster on the pole to build the peg just like the old days. Just before the match started the wind started to get up and it got very nasty blowing in my face both up and downstream. The waggler was looking a struggle as feeding maggots would be hard.  On the whistle I decided to cup in a good handful of caster and hemp on the pole, and thought I'd have a quick look on it, well first drop in and I had a small roach on caster, and I had bites straight away. The fish were small around an ounce but I was pleased to get bites and kept feeding the pole and tried to feed maggots as far as I could. All to soon the pole line became iffy and I picked up the waggler, the wind was now preventing me from feeding regularly, but even so I got a bite most chucks on the waggler from bleak.

After 2 hours I reckoned on having 3lb, so going nowhere fast, and the wind was now absolutely horrendous, it was doing my head right in. I could hardly hold my pole and feed on the pole line, I had to feed this was as I could not drop the rig in close without getting weeded up. Feeding maggots was now a complete waste as half would end up in the field behind me. Bites on the pole were now hard to come by, and fishing maggot on the hook would result in bleak. With 2 hours to go and knowing I needed a bonus I fed a big cup full of casters and hemp on the pole, shit or bust  thought. A little go on the wag brought a 4oz chublet a dace and odd bleak, but I fed nothing. I saw a few anglers walking the bank today, Rich Whitmarsh, Kev Dicks, Andy Britt and Darren Gillman who sat behind me a couple of times. I told them I was having a bad day and not to bother watching me!

Time to look on the pole again with double caster now, I was quite surprised when I had a few 4oz roach, but then they disappeared as quick as they came. I tried feeding with the catty over the top heavily with caster and hemp. I could now get bites but due to the wind and length of line they were hard to hit, plus I definitely had quite a few dace in the peg as I was missing some fast bites on the drop. Of course I managed to hook a decent roach and a pike grabbed that one, it swam off to the boats across, jumped out of the river, then swam back to my bank and snapped me up in the weed.

When the whistle went I can't say I wasn't unhappy, it had been a test of patience that's for sure and I feel sure had the wind not been so nasty there was at least 12lb to be had. I estimated I had 8lb. I was the last angler in my section to weigh, but I had already heard that a few bream had been caught further up, and with the first peg in my section being the last peg in the long ashtip (one of my favourite pegs) it was always going to be tough. Mark Bromsgrove was on that peg, and he had managed one bream and lost a 6lb slab on the pole, plus some bits he had 10lb. After this the next best weight was 6lb 9oz from one peg above me. My estimation was for a change spot on as I weighed 8lb 1/2oz for second in the section and no coin sadly.

8lb of mainly roach on caster is OK, but was never going to be good on the day, and as I expected the bream showed in many pegs. Winner on the day was Richard Chave with 30lb, he was on peg 74 top peg in the long ash tip (bream caught here last week) and he had 3 bream on the float and 4 on the feeeder. second was Ian Sheppard who was on peg 27 at Swineford, he had I think about 19lb of skimmers / bream on the pole and 10lb of roach. Mark Harper was third at Jack Whites with 24lb, bream and chublets on the feeder but he lost a barbel estimated at 9lb. Last in the frame was Colin Dance on the last peg in the first field at Swineford with 17lb+ of small fish and a skimmer.

Odd bream and skimmers had come out at Swineford and in the long ashtip, plus lots of small fish. I've never so many come out in odd ones like that on a clear early season river. Certainly it fished well, and it rarely disappoints does this part of the river.

Had a good laugh and chat back at the results in the Bitton social club, with most of the team having caught a few fish. Some of the anglers looked a tad hot and tired, mainly those who had drawn by Bitton Brook!

Well I wait to see if I have made the team for next week, surely I've got to get a peg at Swineford?
Posted by Tim Ford at 21:03