Been a bit busy with work and really just to hot to do anything once I get home, so catching up on blogs still!

Wednesday last week at Viaduct, started with a nice and tasty cooked breakfast in M&M cafe in Somerton. With weather getting warmer I took 2 litres of drink with me for this match and plastered myself in factor 50 sun cream. I really hoped for a draw on the near bank (pegs 110 to 119) as I thought this might be best (and it has shade), last year on this match I drew 112, but this year 113 was also in so that would negate its margin advantage. Anyway into the tin and out comes 115, happy with that but I would have really run to 116 or 118 as 117 was not pegged.

Onto the peg, which is out in front of its neighbours and I hoped this would give me a little advantage. On 114 was a lad on holiday from the other lodge, and to my right was lodge mate Gordon Cannings. As the rules were top set plus 3 sections it was not going to take long to set up. I considered options and went with 4 rigs, full length at 11 o'clock for meat on a 0.15 job with 12 PR478 to 0.165 exceed, at 2 o'clock with a 4x12 for banded pellet.  A slapper rig for anywhere (this was a waste as never had a fish on it) and a 4x10 for fishing maggot and gbait right in the edge in my hard worked landscaped margin. Note the greenish colour of the water. 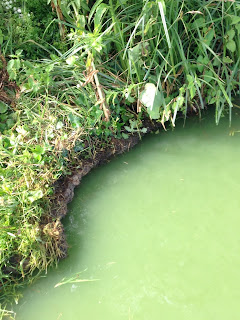 Before long we were off, I started on meat long and dropped in after feeding just 2 pieces of 8mm meat. Around 2 minutes later I was playing a carp, and looking around a lot of people were. Gordon went straight in his margin to the right towards the tree, first chuck carp on elastic snapped!

I'd like to report that I the meat line sussed, but there was a distinct lack of carp activity in the area, and it was all quiet. That is until Gordon hoked his second carp, and BANG, his number 5 section snapped and he lost a top set and number 4. I managed a crucian type thingy, a tench and a couple of small skimmers on the meat, but no carp. I swung around to try the pellet line, first drop float shoots under and nothing. No more bites or signs on this so back to meat, a tiny skimmer. Hmmm first hour not so good then...

Managed to sneak out another carp on the meat second hour and a couple more silvers but it was not going to plan. Gordon wasn't doing any better after his early flurry and my other neighbour was the same. The long pellet line never produced one fish, I was amazed at that, I was feeding small amounts of 6mm pellet, normally get something. In desperation I tried dump potting some bait on a new line, thought I could keep an eye out for fizzes etc. Well the fish didn't want to know that, no fizzes and no bites, this was shite!

With just over a couple of hours to go Dave White arrived behind Gordon, and all of a sudden Gordon started catching in close, not right in by the bank but just out a bit in the deeper water. Now Gordon is usually a meat man, and I assumed that was what he was feeding. I had caught nothing yet over the gbait line, and thought I better get a rig for fishing like Gord. I found to my left was a deep spot close to a point, and the same depth to my right was about a metre out from the bank. I fed meat by hand into these spots. All I got was roach taking the meat on the hook, even double meat was destroyed.

An hour to go with 3 carp for 21lb on my clicker and about 10lb of silvers and Gordon giving me an ass whipping I was pretty down in the dumps, and Dave would not tell me what I was doing wrong lol! Then Gordon snaps another top set, and now he is scratching his head as he's not got the right gear. I felt sorry for him as he was on fish and doing well, so I gave him my margin pole and said do me a favour and catch some fish on it as I cannot, plus you owe me a pint. Now my margin would be much stronger than what Gord was using, and he was soon happily catching and feeling much more in control. My good deed was worthwhile, as I saw that Gordon was not feeding his beloved meat but instead 8mm pellet.

Back to my peg, start feeding pellet on my two deep margin lines instead of meat, put a hair rig hook length on. Two minutes later I hooked my first carp, then another......  Safe to say I had really cocked up on a potential match winning peg, hey ho lesson learned. I ended up with I think about 85lb on the day and had close to 50lb of carp in the last hour. Gordon indeed whipped my ass and came 2nd with 140lb, being beaten by young Joe McMahon on peg 135, well done him. Gord said had had my margin pole set up from the off he would have won as he lost loads. I was pleased for Gord as the previous 4 days he caught very little.

Sorry cannot remember now who won the silvers, oh maybe it was Mike Nicholls lol. Anyway back to the lodge and a couple of cans and some rig tying before we went to the local Indian restaurant. I must say the food was absolutely brilliant, very tasty. It was a laugh for me as Geoff had tried 3 pints of a cider called "Stan" in the Unicorn, and this stuff had quite an effect on him, I'll say no more.
Posted by Tim Ford at 20:20