A bit of a lie in on Monday was nice after a few ciders the previous night, we had a breakfast in Somerton in the M&M cafe and were going to fish Lodge 12 to 6pm. Steve Long gave us pegs from 59 round to 69 which avoided the pleasure anglers who were already there. To be honest I needed to some prep for the match we had the next day at Acorn, and as this was a knock up it was none to serious in my book. I hoped therefore to draw a peg where I could chuck the lead out for a while and do some rigs and maybe nod off lol.

I pulled out peg 64, the Monk, not drawn this peg for a very long time but I could chuck the lead out on it to the end bank. I would also set up a margin rig to fish banded 8mm pellet at about 14m up the bank. I did a bit of gardening here as best I could but I could not get close enough to reach some over hanging branches which would have made striking a little easier. I discounted any lines in front of me in the open water, probably due to tiredness and probably a mistake. A margin to my left was fed but did not offer any bites all day. Woody was opposite me on peg 66 (a peg I have never drawn) and just before the start he decided to loose feed one of his keepnets but he did manage to retrieve it. 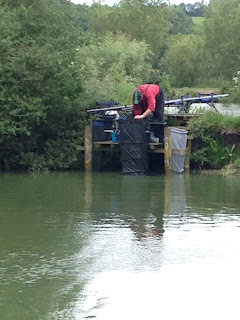 I began the match on the lead with an 8mm pellet, and fed a few of the same to the end bank, I also fed 6mm pellets into the margin. Before the line had tightened on the lead Mike Nicholls on 62 had hooked a carp which turned out to be a double. I was soon grabbing my rod as it banged round, and I held on and tried to pull the fish out of the corner. It was a common about 4lb, the ones that are rocket fuelled! It was about 10 mins later when I had a similar fish in the net, and then a nice 3lb tench. A Good start but then this died and I couldn't get any signs. I tried the long margin line but it was clear there were no carp in the area when I had few hybrids and a 1lb tench. Unfortunately about now the wind which was blowing into the corner and filling me with confidence for later in the match, blew a lot of willow herb all sorts of leaves etc into my margin. During the match I made 8 or 10 visits to the margin with the landing net in an attempt to make a clear spot, but I was fighting a losing battle.

Woody had a good few carp in the net after a good first hour on paste and I was a long way behind him, Mike only had a couple of carp and it looked slow for most. I decided it was time to tie some rigs so chucked the lead out again, but halfway through the first rig round went the rod. I had another three carp and a decent hybrid on the lead in an hour, all the while making rigs and then applying sun tan lotion. Again the lead line died on me and never came to life again.

I spent the last two hours searching the margins and clearing the scum. First drop in and I had one and it felt like a good un, I played it for quite a while and I saw it was a fat mirror, around 13lb I reckon, just when I thought it was ready for the net I gave an extra pull and the carp flicked its head back and snapped me. I had a feeling there and then that would cost me. It was never solid in the margin, but I had odd fish on and off, not sure the scum clearing helped nor getting the odd rig stuck in the branches.

When the match had finished I had 15 carp and reckoned I must have close to a ton, Woody had similar and Mike only had 5 large carp and a few silvers. However, it was obvious to me that Glenn would be the winner as he had seemingly had a carp a chuck for the last two hours.

As it turned out the lost carp did indeed cost me, I would have been second with it, as it was I only beat Gordon who had 74lb on on 68. My fish went much less than I thought at 88lb 7oz. My 15 carp went nigh on 78lb, whilst Mike's 5 carp went 71lb and with his silvers he beat me by 10oz. Woody then had 91lb 7oz which gave him second. Geoff caught late in his edge for 91lb and Glenn won with 25lb of skimmers in the first 4 hours and 99lb of carp in the last 2 hours! I tried to rationalise what went wrong today, and won't blame the scum, not making up a paste rig for out in front was probably a mistake, as was bullying the lost big carp.

It was going to be an early start the next day to get up to Acorn so we decided to stay in and get a Chinese takeaway, though I'm not sure getting off to bed at midnight with a belly full of Thatchers Gold was going to help..... Still the grub was good. 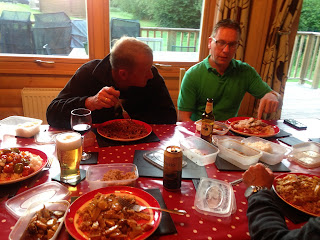