Well as you will have now gathered after last week's effort I was picked for the team to fish this match. Good as I do like the river and it is nice and close to home. Only problem for me was when to do some prep as I was up in London for a couple of days, a works do Friday and off to Manchester to bring the eldest daughter home Saturday. You could say I was low on time and low on energy after I mixed my gbait late Saturday.

Sunday morning and back to McDonald's for the draw, another McRip off and juice and for me and a chat with the other lads in the team. Triv and Andy Ottaway had pegged it and there was some of the worst pegs in up the Crane which we normally never peg. Well surely I would not be up the Crane again this week, umm I mean well surely I would be up the Crane AGAIN this week. Funny how the same lads seem to be up Swineford again oh how I laughed. well I tried not to get bitter and twisted lol. Anyway I was in the end section at the Crane, a few pegs up from the cattle grid I was told, Tom Moretti my team mate is learning a lot from me and he also likes drawing up the Crane.

After the drive to the Crane and struggled to park up I got my kit loaded and off for my short walk. On the end peg by the cattle grid was Steve Hutchinson, I won the section of that peg last year in the same match so a decent peg. John Tocknell was next, then Gappy, and Paul Waddington of DGL was right on the bend and I was about 7 metres above him. It sounds bad, well it is short, but Paul would be fishing down the peg on the bend and I wasn't overly concerned. Last week Neil Richards had 15lb from Paul's peg. but he no angler either side. 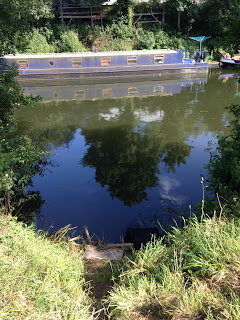 With the match starting at 11:30 I was ready with time to spare, the anglers above me were Ian Staines and Marc Kay in the shitty parrot cage. I mixed up 12 balls of gbait with caster and hemp and threw them in on the whistle. Straight in over with the 2gm float and 10 mins without a bite, oh dear. Eventually I started to get the odd bite from little roach but I was already on the pencil float and it was hard work to get bites. Every fish I caught was further down the peg, nowhere near the gbait and soon I was biteless, maybe a pound after 45 mins, not good. I had been feeding maggots across so went on the waggler, I think in the first 6 cast I had 3 chublets about 3 to 4oz, but these soon disappeared. I picked off the odd bleak and dace but nothing spectacular. Two hours in and the wag was slowing, so back on the pole and 8 small roach in as many drops and then nothing,

At this stage I knew Steve was catching well but apparently it was nothing special for everyone else. I discounted using the feeder thinking every fish was important. The pole line was rubbish for the next two hours, no amount of topping up worked, I was catching only on the waggler about 3 feet deep, I even had a few roach this shallow, and another chublet and a few decent dace, bleak were a pain but I stuck with it until bites dried up.

With an hour to go and the pole line still dead I fed it heavily with some bait droppers of worm and caster as a last gamble for a better fish. After a few more fish on the wag I was back on the pole with 30 mins to go, on with the 4gm and a double red maggot, a quick dip and nothing, so lifted the rig, and then a good bite, a little perch though. Back out, and after a few mins a bite, not a decent fish but a roach of 3 to 4oz, and I took another four of these roach after this to end the match on a bit of a positive note as I had not had any roach like that earlier.

It had been a very hot day, and I hoped I had 6 to 7lb, Ian above me said he might have 1lb and Paul below said he had 2 1/2lb.  I had the board and we weighed in from Steve Hutch. He had done well and had some nice roach in his 14lb 10oz, a clear section winner. John had 7lb, then Gappy 5lb. Paul had severely underestimated and had 5lb 15oz...... My turn and I was happy for the scales to read 8lb exactly which put me into second place in the section as Ian and March could only muster just over a 1lb each.

Today was a lot different to last week, I had to ball it as the bleak are prevalent here, but I could feed a waggler line today and it provided more than half my weight I suspect. All my fish were on maggot hookbait, and it was a battle to catch but not a battle against the elements!

Back at the results my team had a mixed bag of results, but we managed 2nd on the day and are second in the league 7 points behind DGL. I pocketed £50 for second in the section so that was nice.

It was clear the river had fished much harder than last week, but there were still plenty of decnt weights. I missed the framers but know that Mark Bromsgrove had 34lb of bream and skimmers and won from near where Rich Chave was last week. I think Dave Micklwright was 2nd with 18lb from a peg at Swineford.

More rain required for the river, my next match on it will be Newbridge for the Riverfest as I managed to get a ticket yesterday.
Posted by Tim Ford at 21:42