A few weeks ago, I had a text from team mate James Carty, and at the time I must have been distracted by something, or under the influence. He asked me if I wanted to fish this team match at Evesham, for some reason I said yes anything to help the team. Turned out I was the last angler to say yes and so we had a team. Now in case you did not know Evesham used to be a mecca for river anglers, and the fishing good, but for many years it has been very hard and very tough fishing. I have watched anglers who fish it regularly such as Shaun Bryan, Mike Martin Davis and Trevor Chalk post their results on Facebook, and a large part of the time it is not good, 2lb to 3lb is good, anything more than that mega.

Sunday morning up early and I have packed the kitchen sink, it is not a bad drive to Evesham, M5, A46 and you're there. I have actually never fished here before, so had to follow instructions to get to the draw, it was next to the famous restaurant at Hampton Ferry. 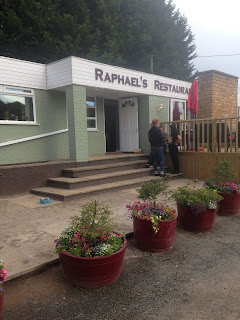 The rest of the team arrived, James, Ian Pauley, Colin Dance and Tom Morretti. Ian had been very useful getting some information before the match and he knocked me up a 6gm flat float. Trevor Chalk had also given me a very good run down on main methods, so I felt as prepared as I could be. We were last but one team to draw, so only choice of two pegs for Ian to choose from. I was placed on peg 20, which I at least knew wasn't in the deeps an area I wanted to avoid. It turned out the peg was in the Crown Fields, and I was just above the main road bridge, with 2 anglers above me in my section and the other 11 below the bridge. It was nice to park the car behind the peg, and I soon had my gear on my peg after moving an angler who thought it was peg 18 lol. The view of my peg today. 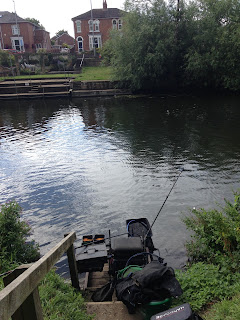 There was a nice willow tree across but there was little flow next to it sadly, as you can see the road bridge below me, which was packed with cars and angry drivers as most of the day there was serious road works going on. 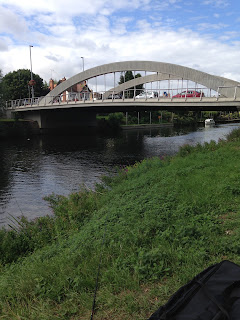 Knowing the there had been a match the day before and that only 1lb 5oz had come off my peg I was going to take it very easy. We started at midday and I began by bait droppering some maggots at 6m, and fed some maggots over with the catty, and fed hemp at 13m. I was hoping to have a nice little run of fish at 6m, but it was proving tough with 3 gudgeon, 2 perch a roach and a chublet after 30 mins. I rested it and had a look on the waggler, I caught a couple of tiny chublet fry, a few bleak and a couple of 2oz chublets. It was hard to feed as the wind was hard upstream, and I missed bites regulary but think this was those tiny chublets.

Back in on the short pole and a couple more small fish and no more, I decided to feed a little bit of chopped worm and maggot here and go back on the waggler again. A few more bleak, a dace and another chublet, but all small. I then spied 4 or 5 small perch by my keepnet, well I could see the bottom four foot down it was so clear. I dropped my rig and watched the hook bait, I caught 4 1-2oz perch before they fled. Back on 6m line and a chublet on red maggot about 2oz, but no more bites, so I put a tiny bit of worm on the 22 hook, and this was a good move as I had 3 more little perch, a gudgeon and a 3oz chublet.

Two hours in and with everything a struggle it was time to try the hemp line. Well the wind was now awful and there was also a lot of streamer weed / pandocks coming down as the river picked up flow from the overnight rain. In 45 minutes I caught 3 roach on hemp, missed a few bites, but it was just not fast enough and the wind was killing it. Even though I thought there were roach there I gave up on it. I fed 2 balls of gbait with chopped worm and caster at the top of the peg at 13m, and started feeding casters with the hemp in the hope of getting the odd roach later down the peg.

I took some more small fish on the waggler, and then went out on the 6gm flatty, after sitting there for about 10 mins I was just thinking of going back to the wag when the float dipped, and then it slowly sank from view, fish on. I knew straight away it was an eel, and netted it safely as it wasn't huge at about 7oz, but my biggest fish by far. No more bites on this so I fed more worm and caster but this time with the bait dropper. I tried the pole line a few times with the hemp rig and 1 gm float, all it threw up was a couple of small roach / chublets on a maggot, but waste of time really. I had another eel about 4oz 30 mins to go and a few more bits on the waggler. Match over and I hoped I had 2 1/2lb.

The lads above me said they had really struggled and were only admitting to a 1lb, and when they weighed in they had 1lb 7oz and 1lb 4oz.  It made me laughed when I weighed in as the people on the scales and walking down were really impressed with my net of fish, one even said I was a hero, lol. Anyway my fish weighed a huge 3lb 7oz and as Trevor had told me try to catch 2lb to 3lb I was happy with that. I did not bother to follow the scales down as there were lots of people behind me in a kiddies playground. However, the lad below the bridge told me he had 2lb and the lad below 3lb, and said I would do well in the section.

Back to the results and I was the first one back in the team, they have a big whiteboard in the draw "office" and I could see every anglers weight on every peg in A section, where Colin had 8 points out of 14 with a level 2lb. Then my section was written up and I was winning it with the last two pegs to go, pegs 35 and 36, these two smashed though with 5lb and 5lb 4oz, so third in section and job done for the team. Soon after Ian Pauley came back, he was second in his section with 3lb 4oz, and things were looking good. Tom Morretti in the last section had weighed 2lb and was joint 3rd, but sadly James Carty had really struggled in the deeps and had 40 tiny fish for 9oz and only beat one angler.

As a team we came 5th, we were I think 3 points behind 3rd place which you needed to qualify for the final. I was really chuffed to find out that the two anglers who beat me both framed, and so I got the £60 section money by default, happy days. Today was always going to be rock hard, I knew that and tried to get my head in the zone, having never fished the place before it was a bonus to get a pick up, I never had a pike take a fish which I'm sure helped. All that said I won't be rushing to get back here, not when the fishing on the Bristol Avon is so much better, but I can see why people go to Evesham, easy access and platforms and a test of character.
Posted by Tim Ford at 21:52