I had to attend a Commercial House meeting Monday night and it was during this that Jerry Pocock mentioned to me that he was fishing a match at Lacock. I have not fished there for at least 15 years, could be 20, so I had to give it a go as I have fond memories of fishing here. I got some hemp and casters ordered and would take some tares with me too. I took my pole out of the holdall and just took a couple of float rods a tip rod and a whip. This was going to help as I have been diagnosed with damaged muscle / tendons in my inner elbow, I have to do stretches etc three times a day and visit a physio, hopefully it will be sorted in 8 to 12 weeks.

Got up earlier than normal to get up to the Pig & Whistle in Melksham for breakfast. I was there nice and early and have to say the breakfast here was very nice. Marcus Crook was running the match and it was really an old boys job, the men who still like fishing running water. This was to be the first match on Lacock this season, so as most people who fish it these days are specimen anglers the small fish should feed, in theory... Marcus asked me to draw out the golden peg, and I pulled out peg 15 the end peg which was two below the road bridge,  new cut out peg I was told. Onto the main draw and I did not get 15 again, but instead peg 10 which I was told was the "conker" in the Abbey field. Marcus told me it was a peg with lots of small fish and if he had it would like to catch 15lb. He was very informative and told me to get in the water and walk up to the left and fish it from there.

If you've never been to Lacock it is a lovely place, and just up from me was the Abbey in all its grandeur. 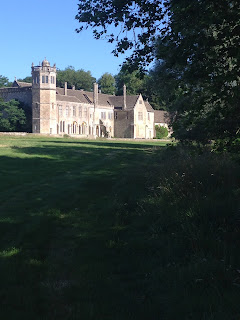 Well it was not that far a walk from the National Trust car park and I was soon looking for my peg, found it eventually through here lol. 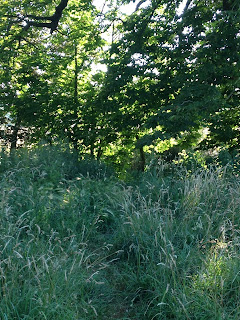 It looks worse than it was, there was a well worn path to the river, mainly from dog walkers and swimmers I expect, and once I got to the river I could see I was just to the left of a huge conker tree. As I peered at the river it was a steep bank with no steps, but a few tree roots and some clumps of grass would make it slightly less treacherous lol. I decided that I would set up on the top of the bank and then work out how to get everything down the bank. The river was very low and very clear, I thought I had 5 to 6 foot of depth but could still just make out the bottom of the river! 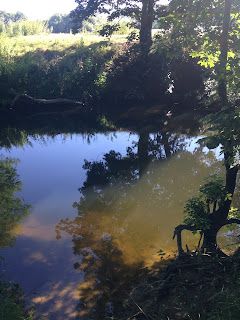 I set up a 4m to hand whip with a 1grm rig with 18 to B611, and a 3 no 4 stick float with the same hook etc. The stick float was lighter than I'd  normally use in this depth of water, but with so little flow I thought a lighter float might help me hit bites, and there was also no wind to worry about. It didn't take me long to set those rigs up, but the fun was getting into the river with my box, and then the bait, and then the gear and being happy with my lot. I got stung a fair bit by nettles on the way but ended up very comfy, I had all my gear close by and was happy, this might let you see my lot...

Ready to start at 10:30pm and off we go, feeding hemp and caster I started on the whip with a maggot on the hook (I borrowed a few maggots off Shane Caswell) and right from the off it was a bite a chuck mainly from fish of 1/2oz. I persevered as I expected little bleak and dace to be on the bait, and kept the bait going in, the river was so clear I could see the fish as soon as I struck. After an hour I had managed quite a few nice dace and some 1oz roach but these had come to caster hookbait, the bites were slowing up a bit but it was still OK. After about 90 min I spotted a big eel by my keepnet, so I chucked some maggots in close and looked back 5 mins later to see the eel eating a few. I grabbed my stick float and dropped the rig in with a maggot on the hook. I watched the eel swim over my hook but not touch it, then from nowhere a perch grabbed my bait. At about 6oz it was easily my best fish, the eel sulked off.

Back out onto the whip, but oh dear no bites at all, so out with the stick float rig. It was going through OK but if I could get a bite it was only a tiny 1/4oz fish, and the next 90 mins were a real struggle with just odd bursts of dace. I couldn't see me troubling the frame today as I was just not going anywhere. However, Marcus had said that people getting in the river above me would dirty up the water, and that had happened earlier but not for a while, and I think the clear water was doing for me. However, luck was on my side today, as the herd of cows opposite got thirsty and came into the river above me proper stirred it up. All of a sudden I started to get bites on the stick, and in the main it was fish above an ounce, I just hoped the cows would stay around a while!

I was working hard with my feeding, and altering the depth I fished and where I cast the float in the peg. If I hit a few roach (and I mean a few) in a few runs through they would move. I found a shotting pattern that let my bait fall over the last 2 1/2 foot seemed best, I could get the odd dace on the drop and sometimes a roach. I had a few roach on tares but they were no bigger than that I had on caster, and in the last hour I had three net roach on caster. The cows stayed in the water till about 15 mins from the end, which was handy, and my last 90 mins were easily my best. I never hooked a lump today, never had a pike strike, it was just a day of small fish and my elbows are aching again lol.

I had the scales and had to weight around me, the guy below me weighed me in and I had 16lb 1oz which was more than I thought. This lad then had 5lb, and below him the next angler had just under 12lb of chublets dace and a few roach. Below the bridge the golden peg had 8lb of dace and the first one below the bridge Bob Ryan had 5 chub and some dace for 17lb 9oz, he lost a couple of good chub too. 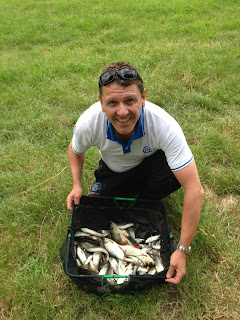 I walked back to the car park and was feeling hot, the other lads were filtering back and word had it Bob had the top weight and Marcus had 16lb so I guessed I'd be third. Back at the pub I was glad of a pint of Thatchers Gold, it cooled me down, and Marcus who was already there told me his 16lb was just that 16lb, and so I had pipped him by 1oz to be second in the match and a pick up £65. Jerry Pocock was 4th and first out of the money with 15lb 8oz, he lost a host of big fish, any one would have won it for him. Bob was very kind to buy me a drink from his winnings, what a nice bunch of blokes they were I would love to give there match another go some time.

Well that was a very lovely day, I was sat in the shade (nice) right by the water and caught fish that had not seen a hook before, small river fishing is such fun. Though it has to be said for some they had dogs, swimmers, and courting couples in the river very close to them, but still the river fished very well. Off to Newbridge next week, an open match before the Riverfest qualifier the following week, we need rain, but not sure it will arrive.
Posted by Tim Ford at 20:35