I had this day booked off a long time ago but was not sure where I would fish. Glenn fancied Viaduct but I fancied elsewhere as I'd not done so well there recently and wanted to keep my run of results going. We tried Shiplate but that was full up and was also full up next week they told me, so on Wednesday Glenn booked us in at Viaduct.

Glenn picked me up at 7:30am and we had already worked out that we would not be able to get all the gear and two trolleys in the car, and so we only took one Preston shuttle. We had breakfast in Cannards Well and seems there are different owners in here since I last visited, very friendly they were and the breakfast was very good. We got to Viaduct just after 9:15 and time enough to get the gear out ready. Turn out was very good, I think 41 anglers, and Steve had spread the pegs out over Campbell, Carey and Lodge. I had no clue what peg to draw, but there were a few I wanted to avoid. Into the tin and I had two tickets firmly stuck together, removed one and hoped I kept the right one, it was peg 59 on Lodge. I've not had the best of times on Lodge in the past but this was a peg I was happy with as it has options and peg 60 was left out. I've got no pictures today as I left my phone at home, doh!

I started on the lead with a 8mm pellet in the band, but fed my paste line and threw a few 8mm pellets into the inside lines. Within 10 mins I had a 5lb carp in the net, and next chuck I had a 2lb skimmer. 15 mins later a pull round and drop back and a carp was on, but it fought very hard and it felt fouled. It was, in the pectoral fin, and I landed a near 10lb common. I hooked another soon after but it came off, after this I never had another bite on the lead.

Time to try the paste, it was slow going and there was no fizzing so not a lot of fish about. However, I could catch 6oz skimmers on it, but I was missing loads of bites and kept feeding pellets to try and draw a carp in. I had a better skimmer on the paste, but I was just thinking of trying the lead again when I had the first positive bite and carp on. Now this fish pulled a bit and I am sure I was bottomed out at one stage, but everything held and after what must have been 15 mins I reversed a common carp that must have been 16lb to 18lb, Adrian Jeffery opposite me gave a round of applause, that was a result landing that one! It was a one off and back to small skimmer bites.

Another try on the lead was a waste, and I had an early look by the tree which was also a waste of time. Everything was a struggle and as far as I could see the only people catching were on peg 64 and the lad on 62 was catching silvers. I had a very barren hour with just the odd little skimmer on the paste, then about half way through I had two carp on the paste, both doubles and that was my first net filled. The skimmers piled back in on the paste and frustrated the hell out of me although I had a few. Another look by the tree and another lack of interest, though I did think I would not catch here till late. Still I took a look up by the pallet where it was about 2 feet deep. Instantly I had bite and hooked a carp, if felt heavy and plodded on and on and off, where's my rig? Ummm elastic snapped......

New top set out and new rig, and back by the pallet, I soon hooked another carp and got this one out, again a lump. Couldn't get another, and so back on paste to rest it. Back to pallet, lump on, in the net. Less than two hours to go and still the tree swim would not give me a bite, but I had to rest the pallet as everytime I did and went back in I would hook a carp. I lost a coupler of foulers by the pallet but not sure I could help that and I had a few more big carp out. Hour to go and let's try by the tree again, boom, carp, hang on drag it out (on my Beastmaster pole) and another double. I had 2 big skimmers here and more carp, 2 net filled. The pallet peg seemed to go off and so I concentrated on the tree now, the carp were here now, and every drop in would result in an indication, I filled a third net and with 15 mins left stuck a 4th in. I had two more carp with the last one being hooked a few seconds before the all out (those last two weighed 18lb and give you some idea of the stamp of fish I had).

I was not sure what I had cos I was really wondering how big some of the carp I had were, I clicked the big un at 20, and must have clicked at least four at 15lb. I kept thinking I have over estimated or underestimated and gone over in a net? In the end I think I did OK as I never went over in a net, Steve Long weighed me in, my skimmers went 14lb 2oz and may carp 192lb exactly, so 206lb 2oz. Nice.

The lad on my right Rob Eagle had a great day on the silvers and he managed 50lb of skimmers a cracking net, and he was top with that. The payouts on this match are done by lake, and as I had won my lake I would get the winners money for it. However, it turned out I had won the day and so was also into the all winners final later in the year.

Well double bubble in the car (Glenn caught on Paste wouldn't you know and he picked up 5 times on the trot now) and a couple of tired but happy anglers drove home. I am now on the best run of my life, who knows why but as we all know in fishing you've got to roll with the good and bad times. This Sunday it is the riverfest, a 60 peg match on the river at Newbridge, it would really be unbelievable for the run to continue and me to get in, the drawbag will decide if I have a chance or not, but if we get more rain it could be a decent match.

Sheets are below, Glenn took the pics so blame him ;-) 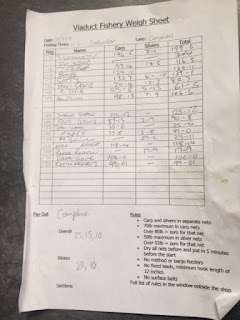 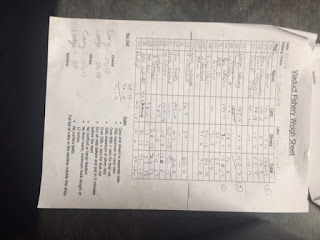