Sometime ago this match was organised and I was asked if I would fish, some weeks later I was asked to be captain of the GAS and get a team of 11 anglers together. The team was :- Shaun Townsend, Mike Nicholls, Glenn Bailey. Mark Jefferies, Gary Mealing, Mark Tanner, Dave Haines, Bela Bakos, Geoff Francis and Paul Elmes. The City team were mainly club anglers it has to be said and were not rally going to compete, but they did have Martin Reyat who stood in as a late replacement.

The match was being fished over the "match" lake and "carp" lake. With the top 3 anglers on each lake to be paid out. As I held out the draw bag Bela Bakos kindly drew me a peg, and I Was going to be on the carp lake, not far from where Mike Nicholls had won the lake from lake from last week, so I was happy with that. A short drive to the peg and parked right behind it, nice. I had an island opposite and a bowl to my left, but neither of those features were going to be in my sights tonight. I say tonight as we were fishing 5:30pm to 9pm. The view from my peg, as you can see it was flat calm and sunny and I did wonder if this would make life tricky. 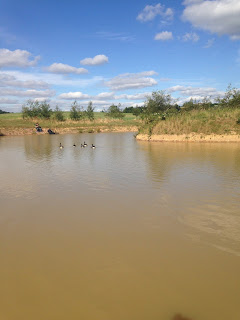 There must have been at least 50 canada geese on the lake, but they did not affect me today. My set up was oh so simple, a paste rig for top set plus one (same depth from here all the way out) and a hard pellet rig. That was it, and I expected to catch on paste all match. However, there was a problem, I had forgot to buy the fishery pellets, and I had no pellet on me, just paste! Nige Hawkins whose son was on the next peg to me, went back to get me some, but the cabin was locked up. Oh dear! A quick sprint round to Geoff and Bela and I cadged some 4mm and 6mm pellets off them, cheers lads. Mark Jefferies also passed some on to Nige for me.

Thankfully I was ready when the all in was shouted and fed a decent pot of pellets on my top set plus one line. Very soon the bristle of the float was shaking and twitching, and soon I had a pound carp in the net. This was the stamp of fish I expected with maybe the odd better one. The first hour was actually pretty good, I had 4 or 5 little carp and three around 3 to 4lb. This could be good then, but maybe not, the swim went dead, and all signs of carp stopped, no bubbles no twitches.

I pushed out to top set plus and fed here, I never had a fish or even a bite here, but after 20 mins a couple of bubbles showed a fish on the short line and I had another little carp. Then nothing for 20 mins then another little carp. Then nothing.  I had been pinging 6mm pellet out to 11m and tried the pellet rig over this, 1 little dig on the float was all I had here despite a couple of attempts. I tried fishing the paste way up to my left in the bowl, waste of time, nothing.

The only place I could catch was on the top set plus one, but I just had to wait for a fish to find the bait. I did start throwing some 6mm pellet into the left margin, but this was just 6 inches deep and didn't inspire me. Nige told me the lake was not fishing great, with Shaun and Bela doing better than me and Geoff doing best of all. I managed a pound carp from the margin when it showed itself, and then with 5 mins to go I saw another swirl in the shallow water, I flicked the rig in and the fish boiled again and soon after the float shot under and fish on. This was not a pounder, it was going some and my top set plus one was under real pressure, but I hung on. It was a double for sure and I just took my time as I was going to be playing after the all out. Nige came behind me and was filming me playing the fish, so he captured my 2 failed attempts of getting this long mirror into the landing net. When I did get it in and out of the water onto my lap it flapped and jumped back in the lake, but was still on. Finally I got it in, it looked like a 16lb+ lump.

The scales got round to us in the dark, and Geoff was leading with 61lb and the Bela with 39lb, I hoped I had 40lb. My little carp weighed 14lb, and my bigger carp together 33lb, so 47lb and second on the lake. The big un was 14lb+ and it was hollow so could be a lot  bigger if fed well, and it bumped me past Bela. 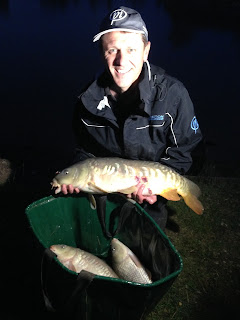 We had a quick pint in the Folly and then off home to get all the gear away and sort a few things out for another match on Saturday.
Posted by Tim Ford at 21:31