Waking up 6am Saturday morning was not easy after a late night and a poor sleep. but I was really excited as I was to fish a venue new to me. I have fished Todber Manors park lake before, but the new lakes (2 years new) on the main site. It was Glenn's idea to fish this, and as the rest of my family are all away on hols I thought why not. We both thought we'd struggle to do well on a venue new to us, but I tried to get some info and Mark Poppleton and Gary O'Shea were both very helpful and I thank them kindly.

The drive down was nice and we were wondering where to stop to grab a bite to eat, in the end Glenn spotted a cafe sign and we we took a look, at 8:10 it was open, but lucky for us it wasn't supposed to be open until 8:30 but the owner had forgot. A good start and a bit lucky, would it be an omen?

As we pulled into the venue car park I noticed a few faces I recognised, and the turnout was decent with I think 38 or 39 fishing. Three lakes were in Hill View, Ash and Home Ground, everyone said you couldn't win from Home Ground and that this lake only goes in when there are bigger turnouts like today. Into the draw and I pull 77 HG, Home Ground. A chat with Gary O'Shea and he said to win the lake (to get the section money) you needed to fish method feeder or pellet wag to island, but I would catch on a short pole to but lots of little fish. I remembered I would need some bait, so I grabbed some 6 and 8mm pellets.

Glenn was on ASH and I drove his car another 30m to my peg lol, it looked very nice. 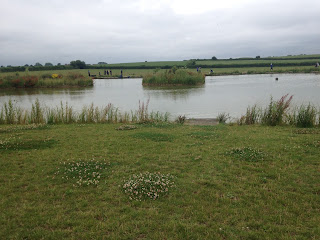 I was the end peg on this bank, and in the distance past the island bang opposite me was Mike Nicholls. On the bank on my right was just the one angler, John Gray, I fancied that as he had loads of room and the wind blowing into his bank. That said I was happy with the room I had too.

I couldn't decide what to fish next to the island, and so decided to set up the pole first and think about it a bit more. I plumbed up, and on top set plus two the bottom started to level off and this would do me, a 0.4g diamond float with 0.16 to 12 PR478 was put up, I would feed meat and corn here. The margins were just 9 inches at most in close so I plumbed up at 18" on the slope with the same line and hook. I noticed that everyone was setting up method feeders, and as the wind was not that bad I decided to be different and set up a 3.5swan pellet wag for banded pellet.

10:30 and all in, I fed a pot of meat and corn at 5m fed long up my margin line, and then continually fed 6mm pellets to the island. Starting on the pole with meat on the hook it was bites straight away from the expected little tench and hand sized skimmers. I had been warned these could be a pain, so fed regularly over the top with meat and corn. I soon hit a couple of small carp, they were probably about 1 1/2lb and fought like little tigers. However, I thought the writing was on the wall early doors as John Gray was in a good rhythm on the small carp. My first hour was good though and I did have a couple of 4lb bream on the pole to go with plenty of small carp and other silvers. When it went a bit funny I gave the pellet wag a go and it wasn't easy or bagging but I did get a couple of small carp and 8lb carp before went back to the pole.

The second hour was as good as the first with small carp coming in steady, plus another couple of slabs. It slowed again and I went onto the wag again, the wind was worse and I switched to feeding 8mm pellet, and I had 4 carp on this but then it became hard so back to the pole. Sadly the pole line was just not happening, and when I did get a bite I either missed it or caught a little tench. This seemed to coincide with the wind getting up and John Gray catching even better. I thought I had 80lb halfway through but was not bagging anymore. Then as I looked behind I saw my old mate Guy Manton, he came and sat with me and as he is a local he gave me some good advice and told me I was doing well compared to others. My only problem was my arms, as I mentioned before I have damaged tendons in my forearms, and all the use of the landing net and constant feeding was taking its toll and I was suffering a fair bit of pain at times.

With 2 1/2 hours left I had upped the feeding on the pole line and the carp were back, but I suffered some foulers probably due to feeding so much. I was also now feeding next to the straw bales in the 9" of water as Guy said that was a good bet, I left my 18" fed line alone. I fed decent amounts of 6mm pellet in the left and right hand margin, and also some meat and occasional 8mm pellet for noise effect.

I spent the last two hours getting odd runs of small carp at 5m and chasing the carp that would come into the margin. I say chase because they would not stay for long and it was a case of try to catch one when it was there rather than just wait in the margin. I had quite a few fish from my right side and a few from the left, all on meat hook bait. I caught carp from 1lb to 9lb and the last 30 mins was best as you'd expect and I was playing one after the all out.

At the end of the match I thought I must have 150lb, but my clicker said 165lb + silvers, I was concerned I had misjudged the size of the fish. The scales were weighing Glenn's lake and he had a great day on the paste having 148lb for second on his lake. The scales then started with me on my lake. My silvers went 25lb 8oz, and my three carp nets 158lb 8oz for a total of 184lb, wow a busy day. Still I knew others had done well on the lake and John had over 200lb.

Mike won the silvers with an amazing 58lb with bream up to 8lb.
I was second in the silvers and so I got double bubble and picked up £180 today, nice.

Well what a day, cannot believe that on my first trip. I got lucky as Home Ground produced the top 4 and top 3 silvers, as the owner said well done to all of us as nobody would have swapped pegs with us before the start. What a lovely venue, rammed with fish, pristine clean banks, and a great tackle shop on site. I'll be back.

Now time to swap all the gear around as Sunday I am fishing again (yep 3 days on the trot) but this time on the Bristol Avon at Newbridge on a  practice open before the the riverfest next week. A short walk please as I'm knackered, but happy.
Posted by Tim Ford at 22:26