My trio of consecutive matches this weekend culminated with an open on the river. Saturday night was spent changing over all my hooks and rigs as well as rods and top sets and mixing gbait. Still if you are going to enter a match you have to be prepared as best you can. Unfortunately my night was a bad one with something upsetting my stomach and I spent from 3am to 5am going back and forth to the loo. When I woke up at 8am I thought about texting Kev Dicks to cancel, but as I got up and about I decided I would be OK. I went to Hanham for breakfast first and then came back home and loaded up the car.

The main reason for fishing this match was as a practice for next weeks Riverfest but I was always happy to fish a first match at Newbridge in the hope of some bream. That said I would have to take the kitchen sink, but I did say to Glenn after yesterday I would happily take a bream peg and fish the feeder all day to have a rest. lol. We all parked up on the side of the river before the pumphouse, there were not that many people which surprised me really, though one lad had come from Bradford to practice for next week. The pegging was from 16 (where I was parked) to peg 56.When the draw began Hadrian Whittle drew peg 50 for Kev Dicks (that's four times Hadrian has drawn that peg) and then drew himself peg 16. I couldn't believe it when I drew peg 56, longest walk, but then end peg and a chance of bream. I had for the first time a four wheel shuttle and it made the walk so much easier for me. In between me an Kev on peg 54 was England International Callum Dicks.

Finally at my peg, it was bloody hot and I was glad I had 2 litres of drink with me as I was going to have to do a bit of bankside clearance, see pic.... 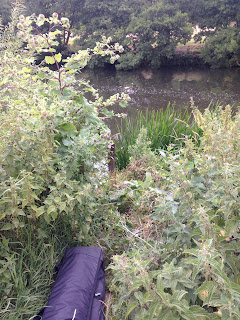 Well after a bit of hacking I could see the route down to the river, and I could get my box in the water and fish nice and comfortably. I set up a feeder rod with 14 PR355 and 0.148 exceed, also a waggler with a 20 to 0.11. I knew this peg would have the flow over the furthest half of the river, but still tried a pole rig at 13m, but when it just sat there and did not move I put the rig back on the winder and put the pole away. Sat on my box I looked at the view and took in my options. 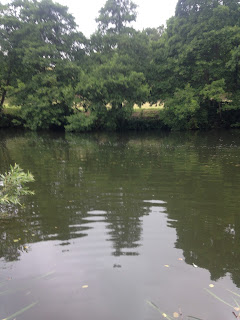 On the all in I cast out a groundbait feeder containing casters and chopped worm, I put 3 red maggots on the hook and as expected had bites from small fish straight away, roach, chublets and perch. After 20 mins I had a proper pull round and a solid pull on the rod when I struck, it was bream. I was really quite surprised to catch one so early, and at about 4lb it was a great start. After this it was soon back to regular bites from tiny fish. A worm on the hook would get me bites from perch, red maggot bite from roach or chublets, but none were much bigger than 2oz.

About 90 mins into the match I had a quiet spell and thought maybe the bream had moved in, a decent bite and heavy fish made me think I was right, but it was a perch of 12oz+, but not long after this I did have another bream on 3 red maggots. After this bites dried up and it was a struggle for me, I even tried the waggler which gave up a few roach and a bleak, but I could hardly get it to go through the swim.

I had quite a bit of company during with at least four or five people sitting and watching and talking, and I was happy with the company. I think it was about 100 mins to go when a cormarant surfaced at the bottom of my peg with a fish in its beak. I scared it off when I stood up, but soon after I started to get bites from small fish again and wondered if it had pushed fish up to me? Soon after Graham Hunt sat with me and whilst behind me saw me catch a 2 1/2lb bream and a 4lb bream in three casts. I was hopeful that this would mean more bream in the last hour, but no more materialised. Glenn came out with his grandson, and whilst behind me I had a good bite and initially thought I had another bream, and thought it was fouled. I then considered it was an eel, and if it was it was good un. After it tried to swim into the near bank I got int into the net, I think it would have been close to 2lb and was probably my biggest eel on the river. After this I just had a few more small fish as it seemed the bream had left me and the match ended, I hoped I had 20lb.

The scales arrived quickly and I was first to weigh, 21lb 2oz was my tally so a nice net, I guess the 4 bream went 14 1/2lb. All day long people had said I was winning the match but as I know only too well bream can show late at Newbridge and 20lb is possible in four casts. Well it happened today, and it was Kev Dicks who had 4 bream in the last hour to win the match with 23lb 4oz. Kev was kind enough to say that the only difference between our weights was that I had the 2 1/2lb bream when he had all 4lb+ bream. Still I could not be disappointed, no lost fish, no missed bream bites and another pick up, and in fact for the fourth consecutive match I was 2nd overall!

Third today was Starlets angler and river legend Hadrian Whittle, he did well off peg 16 to catch 14lb 13oz of small fish, and fourth was another seriously good angler Clive Branson with 11lb of bits from peg 46. After the match I had a nice chill out and a cider with Kev Dicks and Steve Hutchinson in the Boathouse, a good craic it was too. Here is a pic of Kev and some fish (not today's catch but what he had on Wednesday on peg 38). 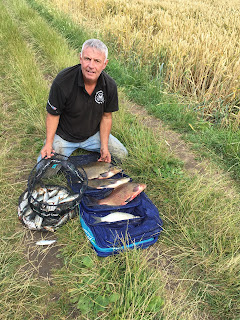 Well that's an unbelievable weekend over for me, I certainly did not expect it to be so good, and winning nearly £300 was a nice bonus. I now need a good nights sleep, I'm not sure this luck can continue onto the riverfest but I'll go there in a good positive frame of mind.
Posted by Tim Ford at 22:27