Fishing this winter league for Thatchers, and I think it might be the first time I have committed to the whole league, in the past I have been a fill in for other teams. After all of my natural water fishing I had to do some serious preparation, and I spent over 4 hours Saturday changing elastics, making rigs and tying hooks. Being the first match you could be drawn anywhere and so I had to cover lead chucking, waggler, dobbing, and silvers rigs. I was glad when it was all done, but I know I need to make a few more rigs for the future rounds. Had a great plan to go out early with the wife for a meal in Hanham and home early. Half a bottle of wine with the meal and a Thatchers and then walk home, but got detoured into the Keys and saw Shaun Townsend, and I didn't end up getting into bed till midnight...

Sunday morning alarm at 5:40am, where am I... Got myself sorted but was a little late being ready for my lift, Ron Hardiman. Ron lives two minutes up the road and with a van could get all the gear in, dead handy. Breakfast at Canards Well, sausages weren't that warm but the rest of it was nice.

Arriving at the packed out fishery the car park was crammed, there are 18 teams of 5 so 90 anglers fishing. Got my pools paid and waited with dread and hope about what peg I would be allotted. As it turned out we were the last team to draw and we got peg 1. I was gutted when I saw I was on peg 103 on Carey, this and 3 other pegs on Carey are in with Lodge lake, and the whole section is float only. I recalled seeing poor weights from these pegs and Lodge giving them a battering, but talking to a couple of anglers they felt there might be an early carp and then a chance of skimmers. I must thank Bob Gullick who gave me a lot of help.

Got to the peg and bang opposite me on peg 76 was my team mate Tony Gilbert, felt a bit weird us being in different sections but fishing the same bit of water. On my right on peg 102 was Mark Bromsgrove and on my left on 105 was venue regular Dan White. Mark could chuck the lead as he was in the Carey section. If you look at the picture of my view you'll see the orange willow opposite where Steve Tucker and Martin Preston were to do battle. 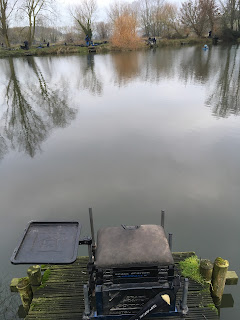 When the all in was called I fed 4 balls of gbait containing some casters and pinkie out to 14m, and 2 balls at 11.5m. Then I cast the waggler out. I would like to say I got my early carp but I never had a bite, I did give it nearly an hour as Dan had one and Mark had one on the lead. Onto the pole and I started on the 11.5m line but was disappointed when the float never moved. Off out to 14m and quite quickly a smal indication on the float, I lifted into a fish and it was a 4oz skimmer. The next three drop ins all brought the same result and if this carried on I was thinking I would be in for a good day. I guess for about 90 mins I caught steady, little skimmers from 2oz to 6oz, then it went off and I refed the swim. I had fed some casters off to my right and so tried that line and the 11.5m both showed no signs of life. Chris Fox was behind me on peg 71 I think, he said our section on Lodge was fishing hard and so I thought I might do OK on the silvers. Dan had no more carp and didn't get the silvers going, Mark had a few big carp. Opposite Tucks and Martin Preston were hooking carp quite regularly on the wag / lead.

The refeed got the skimmers back but it was not as good as before, there were certainly fish there but I was now foul hooking / bumping a few. I tried my strung out rig and this caught a few but soon I bumped one on this. Back on the double bulk and it was frustrating, at one stage I three proper lift bites and landed 3 small skimmers foul hooked. It was never as good after I topped up, and had to do so a few more times, every time I did top up though it brought the fish in. I caught fish on single maggot, double pinkie, but on the day a maggot tipped with a pinkie seemed best. I managed 3 or 4 fish of the other lines but had to keep going back to 14m.

Last hour and I was really slowed up, and with about 30 mins to go had to feed again, but this brought me 3 skimmers straight off wit two of them around 12oz. I topped up again and caught a few more till the end of the match. I thought I had 15lb, but after a quick look thought it might be closer to 20lb.

It didn't take long for the scales to arrive and the top weight from my bit of Carey was about 24lb, just 2 carp from peg 107. Dan had about 11lb, then my net went 19lb 8oz which I was more than happy with. Mark in the next peg and section had 5 carp for 70lb on the lead! Opposite him Steve and Martin had 13 carp each and Martin was top with 155lb to Tucks 145lb.  I did not get to study my section board closely but peg 70 won it with nearly 50lb, I think there were about five or six 20lb weights and then it was me, which I was quite happy with. Picture of my fish thanks to Chris Fox. 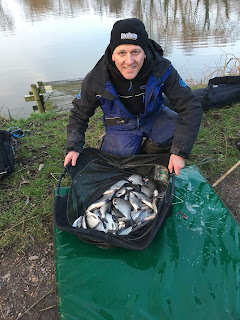 The results were done by Steve Long and his son.

Silvers
1st Des Shipp peg 118. Des had perch and skimmers on long pole and casters, but lost 4 very big perch.
2nd angler I did not catch his name sorry. He had 23lb on Spring lake.
3rd was me yay! A nice little pick up too of £80 thanks.

Colmic  SW were top team and Bathampton 2nd. My team were 9th and halfway so not a disaster like some teams had (see Tony Rixon's blog lol).

The venue threw up some very god weights, but with fish tightly shoaled there were also some barren areas and two or three blanks. This is the nature of the beast and so I am very happy to have had a bit of luck first round. Next round is next Sunday, and I will be in the section which is on match, spring and middle and was very peggy today.
Posted by Tim Ford at 20:05