All week long I had kept an eye on the weather forecast, hoping that the weather might improve for the weekend. Of course mostly cold and damp weather was not going to improve the fishing leading up to Sunday, and Sunday was forecast to be very moist!

After the first match you know which section you will be in next, and I was going to be in D section which comprises Match lake, 4 pegs on Spring and 2 pegs on middle. That meant that I had to consider a few methods depending on where I drew, and so I spent a few more hours Friday and Saturday preparing more hooks and rigs. Saturday was enjoyable watching the Gas win at home with my family and a few ciders (thanks to Glenn Bailey for driving this week), I was however, in bed early Sat night.

Sunday morning arrives as my alarm went off at 5:40 and I heard a little rain falling. I was ready this week when Ron Hardiman arrived to pick me up. Ron said I had forgot part of my trolley, but I assured him I hadn't. As we drove down to Canards Well the temperature gauge hovered around 2C and rain stared to get a tad heavier. Breakfast was all OK and we got to the fishery in plenty of time but still struggled to park up. I was ready for the heavy rain, I had brought two lots of waterproofs and my umbrella, but waited till just before the draw to get dressed up. Andy Cranston was in the team this week and we asked him to draw, I had studied the results of last week and peg 26 and 43 were the clear favourites, but Andy drew me on peg 50. This was on Match lake and meant I had an island to fish to, on the first round Vince Brown had taken 24lb for 13 points out of 18 off this peg, so that gave me a fair indication of my chances.

Getting to the peg was arduous, Ron was right I had forgotten part of my trolley and so I had to make two trips carrying everything to my peg, still that warmed me up, a lot lol. First job for me was to put the box in place and attach the brolly, then got the other bits and bobs close by to try to keep it reasonably dry. First rod out of the bag was my 10ft mini carp preston feeder rod. I set this up initially with a straight lead for popped up bread. I then cast the lead out to clip up as close to the island as I could. First attempt and I never saw a plop and was pulling the lead from somewhere up a tree I though. Next chuck to short, next chuck no plop, WTF! I then realised that there was a waggler hanging from one tree with the line going across my peg into another, oh dear. Luckily a few chucks over the line and I managed to break it off, though the waggler was hanging I could cast to the right of it. This though was enough to put me off setting up a waggler, I didn't want to catch that other line and felt the tip rod was the best bet. That meant two pole rigs for me, and where I was was shallow, about 3 feet deep so only light rigs needed. A 4x10 with 16 PR456 to 0.13 for fishing meat at 14.5m at 11 o'clock, a 4x10 with 18 PR412 to 0.10 for gbait at 2 o'clock. That was it for me.

The rain was already chilling my hands, and all the paths were flooded, I got my bait out at the last minute and took a photo for the blog of my view and then put the phone away to stay dry! As you can see it was not very bright and was very wet. I had to cast to the middle white peg you can see in the picture. On my right was Mike Poolman who had the end of the island, and on my left again was Dan White, next to him was Craig Edmunds. I could also see Mat Toomes and Chris Fox on the bottom bank, Ron was on peg 41 which is not good. 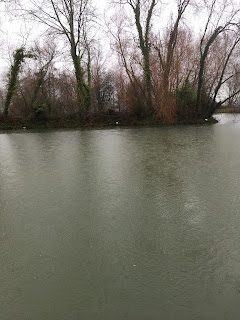 To start the match I fed my pole lines and went on the lead with 2 or 3 discs of bread to get that all important early carp or some of the F1's that are in the lake. Well after the first hour I had not had a bite on bread or meat, Mike had one carp and Trig had a couple of F1's. Time for a change, I put on a small cage feeder and changed to a 0.13 hook length to a 18 PR456. I put two maggots on the hook and cast it out, and it landed right next to the island and I thought to myself that has be worth a bite. Two minutes it was as the rod went off and I was attached to a fish. Initially playing the fish was weird, no fight just pulling a dead weight, then about two thirds back it started to kick a bit. It was decent fish I knew and I took my time, I was very grateful when it went in the landing net, it looked about 7lb I thought. Unfortunately I had forgotten to put my keepnets in (DOH) and had to walk up the bank with the carp and sort all that it, lol what a plonker.

Confidence renewed I cast out again and soon had another indication, but nothing was hooked and when I wound in the hook was tangled, must have been a liner. Sadly this was the end of the indications and the next sixty minutes were fruitless. That said it was fishing awful and I was doing OK I thought. Time to try the pole lines, nothing on meat, and a long wait over the gbait for a 2oz skimmer. Back on the tip and nothing again, Dan was still blanking and Mat Toomes broke his duck with a carp from his margin. I managed a 8oz skimmer and another blade skimmer on the pole but no more bites. With about just over 90 minutes to go I cast the feeder out again, and after 5 minutes a proper bite and another carp was on. Got this one out too, it was about 6lb and the next three casts the tip went round and every time I was in a snag, I hadn't hooked a fish but then noticed that the maggots were burst one of the casts, so must have been roach. A few minutes later I had an 8oz perch on the tip and Mike was now getting roach on the waggler. I changed to meat on the hook but had no bites.

I tried the gbait on the pole again and this was full of small roach now, and I took a few before giving that up as I wasn't going to do any good with them. I thought about trying the meat on the pole again, but Dan and Trig had tried it a lot and not caught so I went back on the tip. With about 20 mins to do Mat hooked another carp from his margin and it was a double, so he was beating me now in my mini section as I thought was Trig. Dan had lost a F1 on the lead and then broke his blank by catching an F1 on the pole. I immediately reeled the feeder in and chucked it up the bank, and tried my pole meat swim with less than 10 minutes left. The light was poor but I could see the float OK, and after a few minutes it buried, I struck and I was in. A lot of 9 hollo elastic came out and I saw it heading to the island, so I carefully tried to coax the fish back, tricky with cold hands and not a lot of feeling in them. This fish fought better than the two on the lead, but it was probably about 5lb, I was glad when it was in the net. I shipped out again, but with only two minutes left had no more bites.

It was now time to have fun packing up, but the rain decided to stop for a while which was nice! I wasn't sure I had enough to beat Matty for the mini section, even though I had one more carp. I reckoned on having 18lb of carp and 1lb+ of silvers.  When the scales arrived to Mat we saw that Mash was winning with 25lb 6oz from fancied peg 43, Mat's two carp went 17lb 12oz and with his silvers totalled 9lb `5oz, I was worried! Mike had 6lb 8oz, then my turn. My silvers went 1lb 9oz and and my carp went 20lb 4oz for a total of 21lb 13oz. I underestimated the size of my first carp I think.

Dan weighed 2lb 4oz and Trig had 17lb 14oz. In the end my whole section was won on peg 26 by Adam Mitchel with 37lb, and with Mash 2nd on 43 that was the same top two as round one. I was therefore really happy to come 3rd in the section and win my mini section. My winning envelope which is the only other photo I took today, when I was home in the dry. 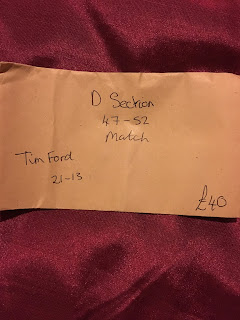 On the team front my lot had 2 blow outs, 1 middle and 2 good, we scored 51 points the same as last time. Colmic SW won again and lead the league.

Winner on the day was Paul Elmes with 176lb of carp on the waggler on Carey peg 102.
second was Andy Power with 141lb from peg 53 on lodge
third Nick Ewers with 121lb from inform peg 131

Silvers weights were low with Dick Bull winning with 16lb from peg 24 on Spring.

Well it was a very tough affair today, I got lucky with my carp but that's winter fishing and you just have to keep going and never give up. Next round in two weeks time and I am on spring lake, after two decent draws I'll need a third as Spring was shocking today and it is very peggy.