Earlier in the week I was looking for a match to fish and was kindly texted by Tony Rixon about a match he was running on Landsend, so I booked in on that along with Glenn. That was handy as I was working in Munich Weds to Friday and would have little time to prep but would be easy enough. However, not long before going to Munich I had a request from Martin Barrett to fish for the team in the K&A canal spring league, I protested that I would have no time to get any bait or prepare, but Martin was out of options and I could not let the team go short. The league this year was 27 teams of 4 anglers, so a good event.

I was delayed on my flight back Friday and spent a couple of hours late on making a couple of rigs and tying a few hook lengths, and sorted out some top kits with light elastic. That would have to do as Saturday was a busy day.

Up early Sunday morning to get to Spencers club in Melksham, but I parked up in the nearby McDonalds to grab some grub and avoid the packed club car park. I paid my pools and got my bait off Martin Barrett, and then waited for the draw which probably was going to be poor as Tony Gilbert was team captain and he has drawn crap all winter. It seem to be a good draw that Tony got, and certainly he was on a poor one up on the pile section. I was at Kings Arms and was going to need a sat nav to get me there as I had not been there before. I did get a little lost but saw Mike Martin and he told me the last bit. It was quite a long walk up the canal before I got to peg 1, and then a decent walk to my peg 11, bit of a hike for the lads on the last pegs. There were some nice bushes opposite me, but I have learnt that on this canal the far bank is often very shallow as the canal has silted up badly. I managed to get my box in place and started setting up as safely as I could on the narrow towpath. 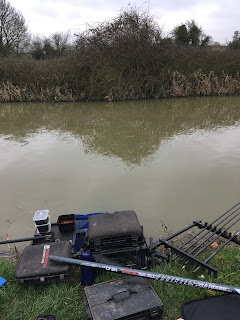 The angler on my left was Chris Telling, and he told me he had been pegged in this area last year and it was poor, but that the reed pegs to my right were better. Picture of the reeds, and on the far end of them was Gary Etheridge who was expected to do well. 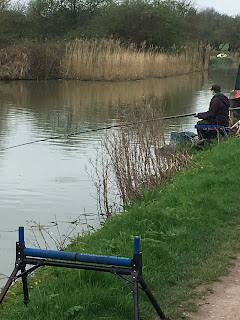 The match began at 10:30, and I was about a minute late starting. I fed all my lines across with gbait and squatt, and one of the lines a bit of worm and caster, so one negative and one more positive. I started on the punch and was quite happy to get a few early bites even if it was from 1oz roach and and skimmers. It was not hectic, and every bite had to be worked hard to get, but after an hour I thought I was ahead of those anglers around me with probably 1 1/4lb. Out to the groundbait lines, and starting on the positive fed line in 3 feet I had a bit of a wait before a positive bite, a fair bit of elastic came out and it was a skimmer, how big I'll never know cos it came off.... Mark Poppleton had walked along to see Chris and as he walked back past me I had another bite and had another skimmer on, just small one of maybe 4 to 6oz, and this one also came off, FFS! No surprise I couldn't get a bite on this afterwards.

For the next hour all I caught were the odd small roach on pinkie, I would have like to have fed some squatt but the wind was awkward, but also caught a few more on punch. Chris on the next peg could loose feed and was catching roach regularly but they were very small. I topped up all my lines during the match, but I couldn't make any of them produce, a lighter rig and dripping in squatt would have caught me more small fish but I kept looking for the skimmers that would boost me up in the section. I did get a couple of 4 to 6oz skimmers from the shallower line, but after them this line died. I was really struggling and went back in on the bread and I managed to pick off another 6 or 7 small fish.

With an hour to go the lad on my right who had really been struggling then had about 10 small skimmers in no time. I was getting nothing. With about 25 mins to go I had a decent bite on the 3 foot line but struck thin air, then a boat came up. The boat didn't do a lot of damage so I stayed on this line, and a fwe minutes the float went again and this time I connected. It was my best fish of the day, a skimmer about 10oz. Sadly no more followed and the match ended with me knowing I had not done enough and was feeling a bit down and damp as it had been raining for an hour.

Rich Whitmarsh who was not walking grabbed the scales and walked off to peg 27 to weigh in. As he came back up I saw most of the weights were high 3lbs and 4lbs, more than I had. The lad two below had 2lb 15oz, then Chris had 3lb 3oz, I had 3lb 4 1/2oz and the lad to my right had 3lb 13oz, next to him on the reeds only had 2lb 15oz. Not the best of areas then it seemed. The section was won by a lad with 8lb 14oz, he had a 1lb roach, couple of hybrids and bits, and an eel of well over 3lb.

Overall the match was won by Tom Boyce with 27lb from opposite the marina mouth at the pile, a noted peg but a great weight. 2nd was Kev Abigail with 22lb of skimmers and roach, and 3rd Lee Trevitt with 16lb+.

Garbolino BMV teams were first and second, but the other Thatchers team were 3rd and well in contention. My Thatchers team struggled, with only Nick Chedzoy doing any good as he had 7lb+ mainly on worms.

Not a great day out, I never felt like I got to grips with the peg, lack of preparation certainly didn't help, but I never got any lines going other than the punch line. I should have had 4lb+ that is for sure, and those lost skimmers were costly. No fishing next weekend as I have to go to Munich yet again, and this time I had to fly out on the Sunday  :-(
Posted by Tim Ford at 21:12