I haven't been to Windmill for quite some time, and truth been known I tried to get in on the Viaduct Campbell open but it was sold out. Anyway, Windmill is very close to home and contains plenty of carp so it was still good option. I met Glenn Bailey at Wetherspoons in Kingswood and I went for the large version whilst Glenn had the traditional. Mine was very nice but Glenn said his bacon was not warm.

Onto the fishery and the road down was full of potholes and I had to drive very carefully. However, the fishery staff advised they were sorting that out, and fair play to them because after the match they had filled every hole with tarmac, nice work. Sadly there were only seven anglers that turned up to fish the match, disappointing but hopefully if the weather finally warms up it will bring the locals back. The match lake has been repegged, and new platforms put in, and as a result the fishing is much more comfortable and there is less pressure on the corner pegs. The draw was done and I pulled out peg 25, that would have put me close to a lot of fish on the old pegging, but now I was right at the near end of the lake facing the point of the island in the deep water. Can't say  was best pleased with the peg because with the Northerly wind in my face it would limit options and only a lead rod would get me to the island. 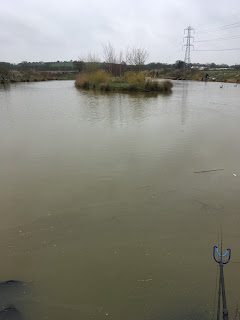 I set up a Preston Innovation 15g Inline Cube with 0.17 Powerline to a 16 PR38. These Preston cubes are great as they are fixed when you cast out but the lead separates very easily from the attachment, and often comes loose when playing / landing a fish, and as such they are very fish friendly. If you haven't tried them give them a go as they are now my first choice for commercial lead fishing.

I set up a 0.4g pole rig for fishing in front at about 9m, but no more mention of this as I never had a fish from this line. I was told the margin here could be good, and I had lots of room so was really confident of catching. I set up a 4x10 PB4 with 0.165 Exceed to a 16 PR456 and I looked for 2 feet of water. I plumbed lines 5m to my right  and 8m to my left both were a few feed off the bank. There was a lot of scum and dead reeds on the surface and I had to clear that out, my chosen spot to my left was up past the clump of spiky grass. 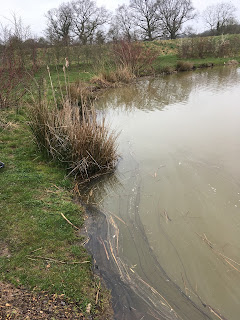 I could see all the anlgers on the lake, and my nearest neighbours were Geoff Francis on peg 2, and Mike Nicholls on peg 23. Glenn was on peg 22. The match started at 10am and I fed my long pole line with 4mm pellet, my RH margin with dead maggots, and my LH margin with 4mm pellet and corn. I began the match on the lead rod, and fed sparingly with 8mm pellets. I was pleasantly surprised to get a liner first cast, but not bite developed. Out again and another liner which caused the tip to drop back as the lead moved down the steep slope. Out again and a small indication, but then nothing. In fact it was an hour in before I had another sign and this was a proper bite and I landed a 3lb carp. At the same time Glenn had his first carp on the pole and Mike had a small carp. I thought maybe this was the signal for the fishing to improve, and it was, but not for me. Glenn and John Osbourne below him started to get carp on the pole. I couldn't get a sniff.

I think it was nearly halfway through the match when I was still on one carp and I was now so cold from the wind that I had to go to my car to get my windstopper fleece. I took a walk then to see Mike, Glen and John and then got back to my peg. I cast the lead out again with the 8mm coppings pellet and blow me the rod took off. A nice 5lb carp. Next cast and a liner then a another wrap round and I landed a 6lb carp. In fact I had another three carp in the next five casts and I was all of a sudden I was up with leaders. Sadly the fish drifted off again, and I was sure they were sitting in between Mike and Glenn as I saw odd carp top there all day, whereas on Geoff's side it was dead quiet and he couldn't get a liner.

The fish had really deserted me again, and with all of my pole lines still not giving me a single indication I was back on the lead. But it was not happening and Glenn tried the lead and caught four on it in no time at all. I had a good moan that the fish were no longer in front of me and I had hardly finished saying it when the tip went round, moaned that one on lol! I managed another one on the lead and there were some fish there as I was getting liners, but I couldn't get them to take the bait, and I tried different pellets, pop ups and cast in different places. Maybe a waggler would have been better but the wind had put me off setting it up at the start, but now the wind had dropped completely.

Chris Gay had come out for a walk around the lake and was behind Mike Nicholls when with 20 minutes to go I tried my LH margin again, within 30 seconds of dropping the float in the piece of corn was snaffled by a lovely 3lb carp. I shipped out again and fed a few pieces of corn and waited a bit longer this time, and Chris was behind me when the float dipped. I struck and was soon playing a much bigger fish. It was one of those fish that feel heavy but don't fight much, and I soon slipped the net under a double figure carp. Back out again and after a few minutes the float seemed to lift up a little but nothing else, I waited but it never moved. I thought I need to feed more so lifted up and a fish was on, hmmm fouled? I played the fish out and reckon it was 6lb and was hooked in the mouth, lucky fish. Shipped out again and toss potted in some more 4mm pellet and corn, there was less then 5 minutes left. I had what was a delicate bite but I struck and another carp was hooked. This one fought hardest of all and gave me a couple of worrying moments, but I landed it as the all out was called, probably an 8lb carp. What a great last 20 minutes, must have had 30lb and as Glenn and John had slowed up I was now looking at top spot as I thought I had 65lb.

The scales came up from Dave Haines and Glenn was top with 55lb. I had two weighs and my total was 73lb 5oz and that was enough for the win. Pic of me with the fish from the second weigh, and what I must say is what brilliant condition the fish were in, not only were their mouths and fins in good nick they were solid and very healthy indeed. 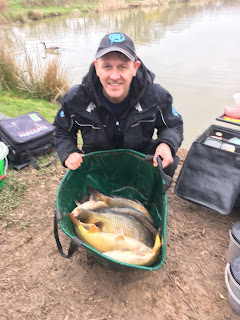 It was nice to be back at Windmill and to win what was in reality a knock up. I admit I was a bit down and out early on, but as ever with carp fishing you just cannot ever give up! Mike Nicholls won the silvers with 14lb of roach and a few skimmers. Hopefully anglers will return now the weather is improving, there were carp boshing down the other end of the lake (out of the wind, or away from the anglers?) and let's hope they get on the feed.
Posted by Tim Ford at 20:37