Thanks to Mike Nicholls I was booked in to fish this match, a 20 pegger with 10 pegs on the two canal lakes, Hawthorn and West Pool. Not fished here for a long time so was really looking forward to coming back here. I had another busy week, I had travelled to Munich again on business (last Sunday flight so hence no fishing then) and was generally tired all week. I had a couple of hours at home on Friday night when I could make some rigs up to cover what I thought would be my options. Saturday was the last home game at Rovers and I somehow ended up sinking a fair few pints of Thatchers, and when I got home topped that off with a couple of large whiskeys...

Sunday morning and I was a bit sluggish if I'm honest, I rang Glenn to tell him I would not meet him, Mike, Geoff and Bela in Shipham cafe, instead I went straight to the fishery and tried one of the small breakfasts being sold on site, I was more than happy with, and I felt better for it. This fishery has an avid following of regular anglers and I knew I was going to have my work cut out to beat them but I like a challenge. It was great to Steve Howell again, we used to battle out nearly every weekend at Cider Farm lakes many years ago. Steve had won a little knock up on Hawthorns yesterday with 180lb, it surprised me as I thought with the weather going cold the fishing might be affected.

I got in the draw queue not far behind slayer Dom Sullivan who is very consistent and hard to beat, he drew on Hawthorn peg 9 a good area as I recalled. My turn and I pull out short walk peg 1 on Hawthorn. Lots of good vibes from everyone about this peg, and was told a lot of fish live there down in the corner by the sedges. However, I was told the sedges come out a fair way and the peg is a known tackle graveyard. I had brought bait for silvers and carp but now was going to focus on carp and that meant there were only two prizes I could win today, overall winner £100 and lake winner £55.

The peg was just about 14.5m wide, it had some bull rushes and spikey grass as well as a bit of bear bank to the left. The wind was blowing from the North East and for the most part I was not that badly affected by it. A 4x10 F1 shallow for 2 1/2ft of water and a dibber for fishing right over and pellet shallow. 0.16 to 16 KKM-B on both. 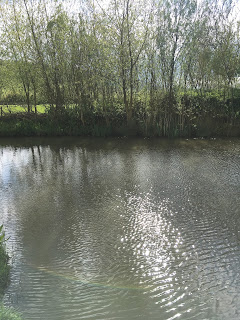 The feared end of the corner is pictured below, I plumbed about and decided upon a spot at 14.5m in line with the left side of the gate, it was about 3 1/2 feet deep here and I set up a 4x12 Des Shipp float with 0.16 to 16 KKM-B. The same rig would do for fishing my margin at 5m, virtually the same depth. I also set up a 0.4g rig for fishing in the deepest water with corn. As I was setting up there were carp showing themselves and blows, it looked good. 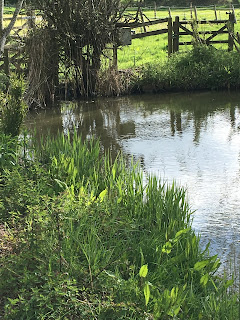 On the all in I fed some corn and a bit of pellet at 11m in the deep, some pellets down to the corner and fed the far bank with a catty. The deep line was fizzing and so I dropped in on there first with a piece of corn, I had a couple of digs but after 15 minutes no fish. With a few carp showing themselves across the far bank I moved over there. Starting on the deeper rig I had a few signs and lost two foulers, onto the shallow rig and for 10 minutes I was infuriated by getting liners but not fish. I finally managed to hook a carp and as the hour ended I had landed 3 for about 10lb. Sadly the fish completely drifted away from the far bank and I never hooked another fish here all day.

I was 90 minutes into the match and going nowhere so had to try the scarey corner. First drop in and I hooked a carp but did not pull hard enough and it snagged me and snapped the hooklength. New hook on and I tightened the elastic up a bit more. Back down there and I had 3 carp in 3 drops and got them all out. Of course the next one I hooked did me good and proper. I tried elsewhere but I could not get a bite anywhere else in the peg, so it was back to the corner. I had quite a few problems hooking up on the bottom, probably sedges, but also branches, so I went a metre to the right and replumbed. I hoped this would take me away from the snags and help me land a few more carp. To begin with it was a good move as I had a few more carp. However, I lost a carp and after this seemed to hook up on more snags, and had one carp on which was boiling just under the surface snagged, I got it free and landed it. I shipped down my pole with cupping kit and managed to clear some line / elastic and a branch!

Sadly the bottom here was covered in twigs it seemed and it became harder to get proper bites and the swim gradually slowed. Fours gone and I had about 65lb. I had fed dead maggots at 5m but I had only taken 2 small carp and a tench here. The fifth hour was a struggle, and I changed to feeding the margin with 6mm pellet, I should have done this from the start. The last hour was my best as I caught around 40lb of carp from the margin, using a 8mm pellet in the band I caught on the deck and on the drop. I lost one large fish that managed to get down into a snag, and I lost one last cast which snapped the hook length just before I was about to land the fish, I guess it was damaged as I was not putting huge pressure on it.

I looked at my clicker and I had 124lb but I tend to overclick on these smaller carp so having had about 28 carp it could be 100lb. I was the last person to be weighed in, and the board showed a 140lb was winning with 126lb 2nd, I didn't have that. I had 4 weighs and my nets went 115lb 4oz. I'd probably lost 7 or 8 carp, so more than enough to win the match. Plus I should feed pellet at 5m all day and I'm sure I would have caught a lot more. To say I was rusty at this commercial canal fishing would be an understatement, and not knowing the venue didn't help, still can't complain I had a nice bag of fish.

As it turned out Richie Hawkins won the match from peg 7 with 140lb 2oz, he caught shallow and in his margins. Dom Sullivan was 2nd with 125lb 12oz and I was 3rd on the day but no winnings.

Rob Birch won the silvers with 21lb 8oz from Hawthorn. Unluckiest angler today was Bela, he was 2nd on his lake Westpool overall and 2nd in the silvers on the lake but picked up nothing.

Coming back to fish here on Bank Holiday Monday, it will be on the main lake, which I think I have never fished before.
Posted by Tim Ford at 20:59