After the match here last week Glenn told me there was an open on the main lake on the bank holiday Monday, and as I have never drawn on that lake I booked myself in. The weather forecast was looking good and I was looking forward to a hot and sunny weekend.

I had a lovely weekend walking out with my wife and my youngest daughter, and in between I managed to get a number of carp top sets set up with new elastic, mainly Dura Hollo 12 and 14, though I did put some 16 into the margin pole. I got plenty of rigs made up for fishing shallow and mugging as I thought this would be the way to go, plus a couple of silvers rigs in case I drew pants.

It was a 10:30 draw and so it was a nice leisurely start to the day and I would have been at the fishery very early but decided on a new route and found a road closure lol. At the fishery the match had sold out with 19 fishing, and the usual fishery experts were in residence and I was greeted warmly by the owners. I was told a draw at the hut end of the lake was needed to do well, and my drawing arm at this fishery is unreal as I pulled out peg 14B which is one off the end peg 15 flyer. I was dead chuffed I had drawn well again and was hoping I would be able to make it count this week and get in the money. The payout today was top 3 overall and top 2 in silvers (no double bubble), last week I was third but had no money as the payouts were split over the canals which was fair enough. Glenn had drawn poor, peg 8 I think, and next to him was Dom Sullivan who was less than happy with his peg 9. The other side of Dom was Steve Howell, and so that was three baggers well away from the carp lol!

I got to my peg and before I did anything else I applied some factor 50 suncream, I was fishing in my shorts, a far cry from last week here when I had my thermals on!!! As I surveyed the peg there were the odd carp far out, but down on 15 and to the left there were carp everywhere, hopefully they would venture my way. Opposite me was an island, but it was a long way away and I decided to not bother setting up a lead to chuck to it. 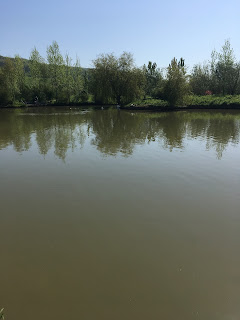 Behind me on Westpool there were carp everywhere, and all day long they were crashing and slurping! As I set up my rigs I kept on the water for carp, I set up a mugging rig, a shallow rig for pellet at 14.5m, a 4x12 depth pellet rig for the same line all on 0.168 exceed to 16 KKM-B.  I also set up a margin rig 4x10 durafloat for hard pellet same line as previous, and a rig for meat at 5m. Lastly I set up a pellet waggler and was hoping to get a few on this as I set it up with one of my new Preston Centris 420 reels. Sadly it needed some backing as 150m of 5lb line didn't get to the spool lip, that said it made no odds as the float cast miles. Only trouble was I never had a bite on the wag so the reel is still a virgin. 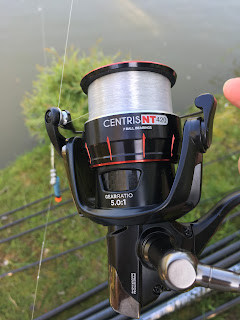 Midday and the all in is shouted, I could see a carp about 10m out and so went straight out with the mugging rig, good first drop in and the fish took it game on. It pulled a bit, and took a while to get the net, probably about 12lb, nice start. No other carp were in mugging range, so I waited for a bit but the others I saw were not in the slightest interested when I plopped the bait near them. I went out to 14.5m and started feeding at 6mm pellet fishing shallow, for 20 minutes or so I never had a sign and also didn't get any muggers I saw. A few fizzes appeared and so I tried the depth rig, missed a bite and then hit one, this fish decided it wanted to go to the island and I hung on for my life. I eventually stopped the fish and could tell it was fouled, probably in the tail. It took a while and there were a few hairy moments, but eventually I netter a 8lb common hooked in the tail. Back out and just on the hour I hooked another carp, this one also went well but I didn't think it was fouled, it wasn't, it was about 16lb and lovely mirror. An hour gone and 36lb in the net, good start.

Second hour and I lost a fouler at depth, hooking the fish about 9" off bottom, I'd lose a couple more like that, pain in the butt when they are like that. I managed another 2 carp, 1 was caught fishing shallow and 1 was mugged. Slow going but but nobody was catching much from what I could see. third hour and I had 2 more carp both on the depth rig, one in the mouth one in the tail. Glenn appeared at this point, and he was pretty fed up as all he had was a couple of tench, all around him was poor. He said Gary Flinders on peg 13A (I think) had 5 carp and Mark Jones on peg 4 had the same, I could see he was catching shallow. Either side of me Roy Ede (on 15) and Ray Wickham were fishing for silvers, though Roy was getting the odd carp too.

Glenn went away to pack up and have an hour or so on Hawthorns. I had one carp not long after Glenn had gone on the shallow rig. With two hours to go I had 8 carp for 80lb on my clicker, I was thinking I would be doing a good weight as everyone was saying the last two hours would be awesome.... Ummm not for me! The carp had long since disappeared and I could not get any signs, I managed to catch 2 tench in the margin in the last 10 minutes and that was it. A very disappointing end to the match which I thought would cost me a framing place.

The scales started on the end peg 15 and Roy weighed in 18lb of silvers, plus some carp. My turn next, 4 carp in each net, first net goes 50lb, and next net 33lb, plus the two tench I ended up with 85lb 14oz. A picture of a couple of my larger carp. 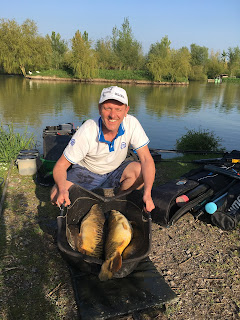 Ray Wickham had 16lb of silvers, and then Gary Flinders was next, I assumed he had beat me, but it turned out Gary suffered with the carp not staying in his peg either, and he had around 60lb. Gary told me he was confident he would do a big weight on the peg, but the carp had other ideas today and may have been dining out on silvers spawn. As it turned out the pegs opposite were better and the winner was Paul Faires from peg 2 (whom I could not see as he was behind the island. Paul had 138lb  14oz, he caught on pellet to the island and also on worm over caster in his margin. Second was Mark Jones who weighed 112lb 2oz all carp caught shallow, Mark caught best the last 3 hours when a bit of ripple appeared in his peg. Third was me, but that meant a pick up this time yay!

Steve Howell did well today to win the silvers with 20lb 12oz from the far end of the lake. 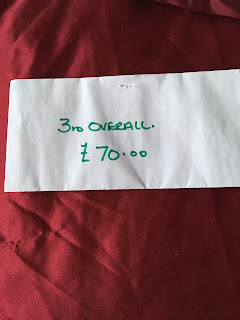 After the match Glenn rang me to find out how I had done and the overall results, he had drawn another bad peg as the A38 was solid due to bank holiday traffic. I took a route through Cheddar and past Chew Valley Lake and got home trouble free. Couple of cans of Thatchers to cool me down and now it is time for bed.
Posted by Tim Ford at 21:48