Back to Windmill for Sunday as I fancied staying local. I had spent a lovely Saturday with my wife, we went to Westonbirt Arboretum, walked the long way around it, and then then we had afternoon tea in Tetbury, that was a Xmas present from my sister in law. Had a great Argentine Malbec red wine, only had half the bottle and felt the effects of it that night, still there was no prep required as I had done all that last week luckily.

It was looking like being a lovely Sunday weather wise, I grabbed a breakfast at Kingswood Wetherspoon and was soon at the fishery. Sadly once again the turnout was poor with only 9 anglers but there was still £50 for the winner to fish for, as well as the golden peg. However, I did not draw the golden peg, that honour went to gentleman Bob Warren, I pulled out peg 4 instead. Peg 4 has been a good one of late, last week Chris Davis had 130lb from it to frame, and so I was quite happy with it.

Got to the peg and the lake was flat calm, no wind and no fish showing either, but that doesn't always mean the fish won't feed. The peg is one of the few that the island can be reached with a pole which is a real bonus, but I hoped I wouldn't have to go the full 16m. In the picture straight in front of me was some spiky grass, and on top of it was a moorhen nest. To the left was a bit of bare bank, very shallow but with my catapult feeding I would feed both spots. 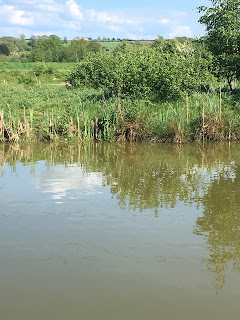 Rigs for today were quite simple, a 4x12 for fishing about 18" deep across (short of the island) with 0.16 to 16 KKM-B for banded pellet, a Tyson dibber with a long line for swinging a pellet into the far bank shallow. I did set up a shallow pellet rig for slapping too. A meat rig for 4m never had a bite, and a 4x12 margin rig... never had a bite!!!!

My neighbours for the day were to my right on peg 2 venue regular John Osbourne, and on peg 7 was Ade Crawley. The match started at 10:30 and I began on the shallow slapping rig fishing at 14.5m feeding 6mm pellet and had a 8mm in the band. It was slow going to begin, and I swapped to the deeper rig but had to fish further across (it was 2 1/2 ft at 14.5m). I had a carp soon on this rig but lost two foulers straight after. Back to the shallow rig and I managed one carp and then nothing, back to the deeper rig and a couple more carp and a fouler. It seemed it was a slow start for most people and after an hour I was doing best from what people were saying. The second hour was much the same, shallow rig not working but get the odd carp on the 18" rig, there were carp over my feed but with no ripple they were proving hard to hook in the mouth!

The third hour became a real test, a lack of any indications, and those I had were liners. I pushed the rig further over, so had to shallow up. It was strange because my shallow dibber rig fished about 6" off bottom would get no interest, but the depth rig (now about 14") would get me the odd indication and lost fouler and odd one in the mouth. I would go ages without anything and then have two in two drops! I tried 6mm in the band, didn't make a lot of difference, and went back to 8mm.

Ade was struggling, he had managed a few carp fishing 14m, John had taken a few carp long lining towards the island, and some silvers and carp in his margin From what I could tell with 2 hours to go I was still winning the match, I thought I had about 70lb.  I just kept ticking over and working hard, varying the feed and where I dropped the float, but getting a proper bite was always a test. My margin and meat lines were tried regularly to give me a rest, as fishing 16m full is hard work.

John had a good fifth hour in the margin, but it died for him after this, MarkSummerhayes on the other side of the island started to catch well on the paste short and his last two hours he had 60ld he reckoned.

The last hour when I thought the margin would kick never did, but finally the carp got more confident across, and I started to get the odd proper bite where the fish nearly pulled the elastic out. Not frantic and had to be patient, but more fish to bite ratio.

The match ended at 4:30pm and I had 120lb on my clicker, not one silver fish today. John was first to weigh and he had 60lb, me next and I had spread my fish over three nets, my final weight was called at 121lb 10oz. Ade struggled for just over 20lb.

I had to wait for the last anglers to be weighed in on the other side, as they had done OK, but as it turned out I had done enough to get the win. 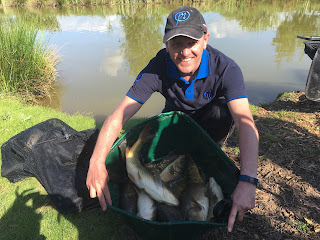 Silvers winner was Dave Wilmott who won this prize by doubling the second weight, with 13lb.

A lovely day, had to keep working and concentrating all day, adjusting what I fed and lifting and dropping. The shallow long lining rig came in useful towards the end but used at depth, I felt the carp were spooking with pole over their heads and long lining helped I feel. Had a couple of pints back at the folly with Hainer and Dave Wilmott, good company sat in the sun with a cider.

Next week it is the Royal Wedding on Saturday, and so I will be watching that.... Will I f*ck! I am going fishing Saturday, not sure where, but I am not staying home, lol!
Posted by Tim Ford at 20:29