Frying at Viaduct on a Bank Holiday

This has been a really great weekend. It was my wedding anniversary on Sunday and so we wanted to have a good celebration all weekend. Saturday in Bristol was great, a posh meal, splendid wine and plenty of other drinks during the night. Bit of gardening and walking Sunday, followed by some Martin Miller Gin.

I woke up early Sunday with no hangover and really was looking forward to the day. It was a pleasant journey to Viaduct and I arrived in good time but still had to park by Lodge lake. I got all my gear on the shuttle and paid my pools to Steve Long and saw that Trig had turned up. I had hoped that after his mammoth 300lb+ yesterday on Carey he would have stayed at home for a rest lol. I was in the draw queue fairly early more by luck than judgement and hoping to avoid Lodge lake as it has not been great of late. The lad in front of me drew 113 on Campbell, Andy Cranston and Trig behind me drew 125 and 126, so of course I had pulled out 53 on Lodge! Steve Long sniggered and Trig simply said I would not fancy that, in fact nobody gave me good vibes. There were 9 pegs on Lodge and two sections, so I would be fishing for the section money.

I pushed my shuttle all 20 metres to the peg and surveyed the water in front of me, there were plenty of carp on the surface from 4m to all the way up to the rope on peg 70. The only trouble was I thought they looked like non feeding fish, but I would have to try to mug some of them. You can see a couple of carp by the tree in the photo. 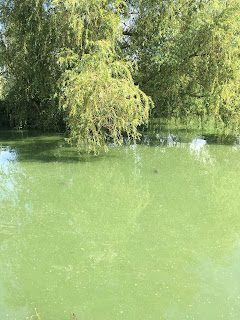 Rig wise I set up a mugging rig with a Preston Tyson with 16 KKB to 0.17, a 4x12 pellet float for fishing on the deck up behind the tree to the left, same hook and line. Lastly a 4x10 Durafloat with same terminal gear for fishing in the margins, left down to a tree, and to my right. I also set up a lead rod to chuck down to the end bank, but this became redundant as today was the day the willow trees decided to release their seeds, white fluff!  Picture below shows the tree in the left and end bank that I would have liked to have cast to later on. 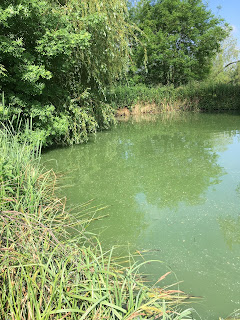 The match began at 11am and to start it was a simple try on the mugging rig. I was pleasantly surprised when after 5 mins I got one to take the pellet, it hardly put a fight and I soon put the net under a 10lb fish. After 20 mins I mugged another carp, again it didn't really fight that much and if anything it was a bit bigger than the first one. I think these fish were literally switched off in the sun and I netted them before the adrenaline kicked in, as both went mad in the landing net. If this carried on it would be a huge weight day, of course it didn't and I had not added anything when the first hour ended.

Into hour 2 and I had begun to feed 6mm pellet behind the tree, and 8mm pellet to the right hand margin as I hoped some of the cruising carp might eventually move into there. The white fluff was now getting worse and my long pole line was full of it and with no bites here and the rig full of fluff I gave it up fairly soon. I saw a carp in the margin and quickly dropped in there with an 8mm pellet, the carp was still there, but the float wasn't registering any signs so I lifted it and hooked something which caused a boil and came off. Dropped back in and hit snags, bad snags keeping the bait off the bottom. I decided to have a drag around with a deeper rig and got out a fair few branches and some elastic. I left the margin alone and managed to mug another carp to end hour two.

The third hour was a complete waste, the fluff was horrendous and I could not see carp to attempt to mug them, and spent time trying the margins as I could get a bait in, but no bites. The lad on 73 had enough of the fluff and packed up and went home. The fourth hour was also blank for me, though I did foul another fish in the margin, I hadn't seen hardly a fish caught though and so I soldiered on.

Luckily a little breeze got up and started to shift the fluff down into the end bank, it also seemed to get the carp moving a little and I managed to mug a couple more. Also there were signs of fish coming into the rh margin although the left one never produced a fish. The margin fish were very tricky, I got the feeling that they weren't really interested in feeding and were not hanging around long. I did manage to catch a few carp in this margin, with one that must have been close to 15lb and he did fight. I did lose another fouler which snapped me, and lost a rig when I flicked the pellet a bit farther than normal and hooked up solid. Still the last couple of hours while by no means solid at least gave me something to work at and the fish were of a good stamp, I think I ended up with 11 carp and had 110lb on the clicker, so probably 100lb. I was hoping I might win the section, but I had seen the lad on the monk catching a few late on, but really had no clue what he had. What I did know was I was bloody hot, sweating like a pig, and covered head to toe in white fluff, lol!

Steve Long began the weigh in with me, and my fish went 105lb 11oz so clicked well today, and Steve reckoned that could be the best on the lake. Indeed Lodge had fished hard with Warren Beard on 64 having 76lb 7oz and 44lb on peg 68 was third on our lake. That meant I would get my section money. Picture of some of my fish, the photographer used the video function instead of the camera, hence the play button in the piccy as I took a screenshot of it. 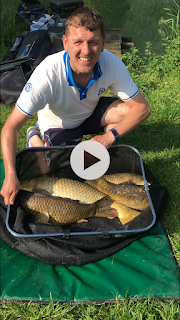 I managed to come 10th overall, happy with that as Campbell and a few pegs on Carey were clearly the place to be today.

Back at Viaduct again next week, standing in for Emma Drysdale on the spring league.
Posted by Tim Ford at 21:26