This was another of the winter league dates turned into an open match. A lot of credit needs to go to Kev Dicks and Dean Harvey for running these matches and doing some excellent swim clearing. A few anglers down on last weeks match, so just 16 fishing which meant that only Swineford was pegged and not the Crane. I wanted to avoid the early pegs in the first field, and if I could choose I would want 15, 17 and 18 in the second field as well as up by Bitton Brook. I was though the last one to arrive for breakfast at Willsbridge Jarretts cafe, and the draw began whilst I was only a third the way through my breakfast. When Ben Rendall drew Kev Dicks Bitton Brook and himself peg 17 straight off I was thinking oh dear, and when serial drawbag merchant Paul Purchase drew peg 18 and young Lewis Walker 15 I was rather perturbed. I had a choice of three pegs, not sure what they were but I pulled out peg 12 which is the current first peg in the second field and really not a peg I wanted, I may be going home was my comment.

Once I finished my breakfast I drove to Swineford and tried to get myself motivated. The peg needs wading in and as I didn't have them I needed a favour and thankfully Paul Purchase came to my aid. I walked past Andy Curry on peg 4, Dean Harvey 6 and Rich Lacey 7 (all pegs I didn't fancy) and Jerry Pocock on the last peg in the field. My peg is full of features, but just the wrong sort, a pontoon doesn't float my boat lol. 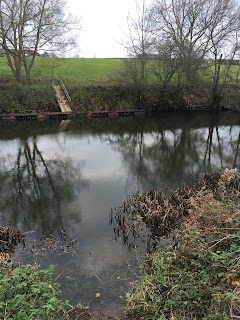 There was a hacking downstream wind and it put me right off setting up a crowquill or bolo as I could see the top of the river being pushed faster downstream. I only set up a 5AAA waggler which took 5 no8's down the line with 0.11 to 18, plus a lead rod with 0.15 to 16. My main attack was to catch some chub as odd ones are caught in this peg, though last time on a w/l match Warren Bates had this peg and only managed 2 1/2lb....  I had to get my box out to connect nets and bait stands etc, it was touch and go with all the legs extended. 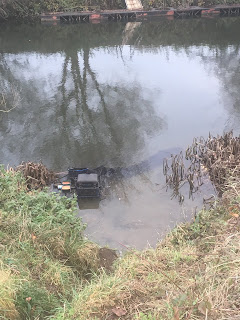 The river was very clear but had a nice bit of flow, and to me at Swineford this always means fish a float and loosefeed, even if on bream pegs as they seem to like to move about a bit in amongst the feed. Anyway that was my plan and so I started the match on the waggler loosefeeding maggots and casters. The waggler was going through nicely and I could control it nicely and fish it from halfway to three quarters in and around the feed. Well it all seemed good but I couldn't get a bite, and then just before the first hour was ending I had a definite bite and I was hooked into something. Not a huge fish but as I gained control I caught a glimpse of a chub about 1lb 1/4. Sadly a glimpse was all I had as a pike also saw it and it pulled the chub of my hook, oh bother!

I gave the peg a good thrashing for another hour but had no signs, Rich Lacey had already been bank walking earlier and informed me 15, 17 and 18 were all getting a few. With cold feet I decided to go for a walk myself, and first I saw Lewis who had 3 bream and a skimmer, Ben had 4 chub and Paul 3 bream and a skimmer and then I saw him catch a 4.5lb chub on the crowquill. It was nice to see the fish but didn't do a lot for my confidence, so I went upstream and saw not a lot other than Jerry Pocock who was catching pretty well on a bolo, chublets. I said to Jer I'm giving it another 30 minutes and then I'm packing up.

Back to the peg and with no bait gone in for a a good 15 minutes I ran the float through hoping for a bite without feeding, it didn't work. At 1pm I was back to loose feeding and slightly upping the bait as I needed to make something happen, the waggler was way down the peg and I struck and it was solid, I wound down hard and felt a kick, ooh! I dragged the fish all the way back up and scooped up a near 4lb bream, yay not blanked! Next cast and the float went under again but closer to me, and again the strike met with good resistance. Amazingly it was another bream similar size. I was on tenterhooks on the next cast and went the float went under I was thinking here we go, but this time it was a a little 4oz chublet. Three fish in three casts, well that was that for another dozen casts. I did get two more bites on the waggler in the next 30 minutes, I never connected but both times the hookbait was gone.

With an hour and 15 mins to go I had another bite and another bream, and then next cast a 12oz chub, about 10 mins later I hooked another decent fish but after a short bump, bump, it seemed to go solid and came off, my first thought was had I fouled it, after this I had no more bites on the wag that was my lot. I tried the lead with no signs and went back to the waggler, but all signs of fish had gone. Back on the lead and with about 25 mins to go I had a decent bite and for a few seconds had a fish on and then for no reason it came off. When I wound in the 0.15 hook length had parted in the middle, so I think there was a snag there and reckon that was what also did for me on the last waggler fish.

End of match and couldn't see me winning any money this week unless others had stopped catching in my section. I thought I had 13lb and when Dean Harvey arrived with the scales he called 13lb 4oz, not enough today for sure. Best pictures below I have from Dean Harvey who is no David Bailey PMSL. 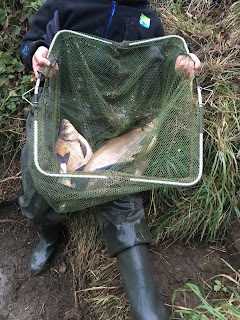 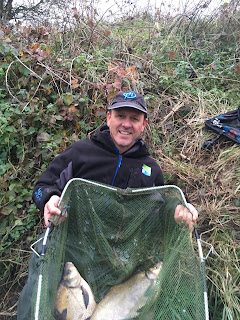 Top of the pops today were:-

There were no small fish caught from peg 4 until you got to peg 27, it was chub or bream, just what I thought. My only satisfaction today is that the river did indeed fish how I expected it to, and I was on the right method, just needed a draw but that's fishing. With Lewis winning my section I was never going to get any dosh of my peg today, but it was nice to get a few out on the waggler as it is not often I get to fish like this and I do enjoy it.

Looks like an open at Newbridge next week, bit of rain in the forecast so hopefully it won't be clear.
Posted by Tim Ford at 20:25